The BMW 2 Series Gran Coupe offers a break from the norm, with its distinctive, sporty style and four-door practicality. 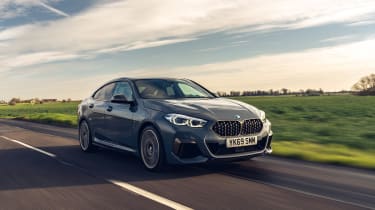 The BMW 2 Series Gran Coupe is a good car, but will only appeal to a small audience. It’s just about big enough to be considered family transport, but its coupe design brings compromises on rear space and practical load lugging ability.

If BMW’s four-door coupe does meet your particular needs, you’ll also have to wrangle with looks which aren’t to everyone’s taste. Nonetheless, the 2 Series Gran Coupe does bring its own sense of style and, as an overall package, could tempt customers with its strong levels of standard equipment, on-board tech and decent driving dynamics.

About the BMW 2 Series Gran Coupe

At the turn of the millennium, BMW had just a handful of models to tempt customers who were looking for a premium, stylish car that was good to drive. Fast forward some twenty years and the manufacturer now has over thirty individual model lines, catering for pretty much every motoring need.

But why stop there? BMW certainly doesn’t think it should, and has now added the four-door Gran Coupe to its growing 2 Series family. The car sits alongside the smaller three-door 2 Series Coupe, the drop-top 2 Series Convertible and the family-focused 2 Series Active Tourer and Gran Tourer models.

The Gran Coupe is based on the front-wheel-drive platform of the 1 Series hatchback, adding extra space while aiming for a distinctive, more high-end look. It’s competitively priced when compared to its most obvious rival, the Mercedes CLA Coupe. Audi’s A3 saloon is available at a similar cost, but brings a boxier, more conventional design that may not meet the demands of those looking to make a style statement.

Customers struck by the four-door coupe style, but looking for more interior space, could look towards the Audi A5 Sportback, Volkswagen Arteon, or even BMW’s own 4 Series Gran Coupe, although these models obviously bring a significant increase in list price. 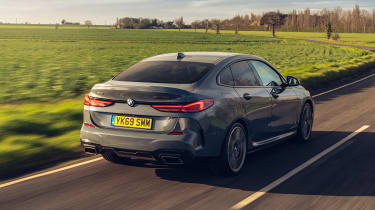 BMW offers a simple range of engines for the 2 Series Gran Coupe. A single 1.5-litre, three-cylinder petrol unit is available, along with a 2.0-litre four-cylinder diesel powerplant. The 218i petrol engine delivers 134bhp, while the oil-burner is offered as a 218d version with 148bhp and a 220d variant providing 187bhp.

A six-speed manual gearbox is standard for the 218i and 218d, with the option of a seven-speed dual clutch automatic. The 220d is offered solely with an eight-speed Steptronic Sport auto ‘box.

At the top of the range is the performance-orientated M235i xDrive. Using a 2.0-litre four-cylinder petrol engine, the four-wheel-drive model produces 302bhp and 450Nm of torque, and comes with the Steptronic Sport eight-speed automatic transmission, uprated brakes and stiffer suspension.