We love the new BMW 5 Series with diesel power, but what's the top-spec petrol car like? 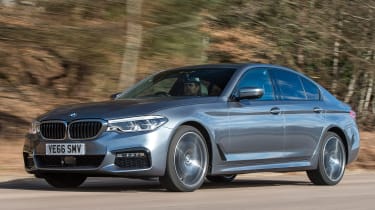 We've already awarded the popular 520d a full five-star verdict, and while the price makes this car harder to recommend, it is one of the finest petrol execs on the market. The silky-smooth six-cylinder engine is punchy, refined and even admirably economical. While company car buyers will continue to lease diesels in their droves, the 540i is a special saloon, with exclusivity to boot.

Despite rumours that diesel is dying, it remains the fuel of choice for lots of cost-conscious car buyers. As many as 80 per cent of BMW 5 Series customers are expected to go for the 2.0-litre diesel, with the six-cylinder 530d coming a close second.

However, for those worried about NOx emissions and potential future expulsion from busy city centres, BMW also offers a range of petrol engines. From launch, you can specify a rear-wheel-drive, four-cylinder 530i, or this: the flagship 540i xDrive.

Sitting at the top of the 5 Series range until the new 600bhp-plus, four-wheel-drive M5 arrives later this year, the 540i offers performance not dissimilar to the outgoing M-car’s – albeit with around 250bhp less. 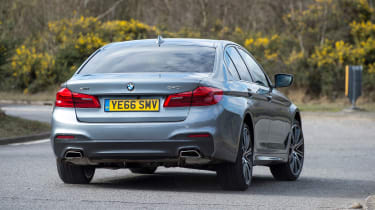 In fact, the model we have here is just one tenth slower from 0-62mph than a V10-powered M5 from a decade ago, as well as being much more efficient.

The 540i will cover the benchmark sprint in 4.8 seconds. Traction is good thanks to the standard-fit all-wheel-drive system, while the sweet-shifting eight-speed auto produces seamlessly fast gearchanges. The noise it makes is a little muted, but it’s safe to suggest that engineers will be saving the full-fat sound for the hardcore M model.

We’ve already driven the popular 520d, awarding it the full five stars and a road test victory against the Mercedes E-Class and Jaguar XF – and this high-spec petrol does little to dent its appeal.

The six-cylinder engine is refined, and although our car’s £1,200 optional 20-inch wheels sent the odd shock into the cabin, the ride is well resolved. Our model’s £985 adaptive dampers softened harsh edges. 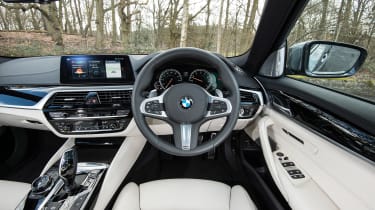 The 540i handles much like the all-wheel-drive diesel, with excellent body control and plentiful feedback through the thick-rimmed leather steering wheel. These traits make the car feel much more agile than its bulky dimensions would suggest. The 540i is constantly alert, and a prod of the throttle delivers a surprising turn of pace – although the safe and secure xDrive system robs it of some of the standard car’s driver appeal.

Projected fuel economy of 39.2mpg is impressive for a near-350bhp six-cylinder petrol engine, although our 650-mile journey back from the Geneva Motor Show culminated in a trip readout closer to 30mpg. CO2 emissions of 164g/km are much higher than for either of the diesel models, so company car drivers will need to think twice before taking the plunge.

Inside, it’s business as usual, meaning the 540i can compete with the best in this class when it comes to interior comfort and quality. BMW’s latest infotainment system sits proud above the air vents and climate controls. The set-up is hugely intuitive to use, and is now operable via a responsive touchscreen, or the familiar iDrive wheel. 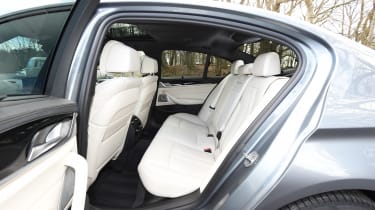 As you can imagine, the options list is as long as your arm, although there were a few items fitted to our test car that really stood out. The £965 Active Cruise Control with Stop and Go functionality made heavy traffic a breeze – accelerating, braking and steering to keep you out of harm’s way.

The 540i in these pictures also featured BMW’s Parking Assistant Plus, which uses cameras to show the car on the dash screen and help you squeeze into tight gaps. However, at £1,095, it’s not cheap. The lack of Apple CarPlay as standard seems a little stingy, too, but at just £235, few buyers will suffer much when swept up in one of the competitive monthly deals.