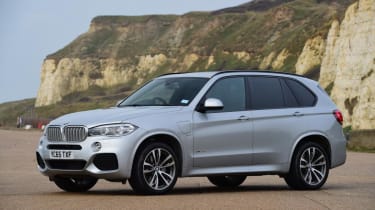 While you’ll need to remain on the road to get the best out of an X5, if you spend time behind the wheel you’ll see you can have your cake and eat it. You’ll enjoy a lofty seating position with the advantages of forward visibility that brings, but there’s no real dynamic penalty to pay. These are sought-after cars, though, so the X5 is costly to buy on the used market, while running costs tend to be steep, too (get an insurance quote before buying). Still, relatively frugal engines mean road tax and fuel costs aren’t as high as with some rivals.

Until the original BMW X5 arrived in 1999, SUVs were ponderous. But when BMW’s first 4x4 appeared it changed the rules: driving an SUV no longer meant corners were your enemy.

The even-better X5 Mk2 brought a third row of seats, so expectations were high when the Mk3 made its debut in 2013. Nobody was disappointed. Here was a full-sized SUV that was even better to drive than before, with all of the latest technology and some of the more efficient engines in the segment.

A Mk4 X5 is on sale now, but you’ll still need deep pockets to buy and run a Mk3. However, if you can stretch to it, you’ll love every minute of ownership. 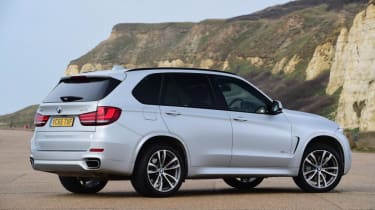 There was a choice of SE and M Sport trims, while Pure Experience interior and exterior design packages were available, at £1,895 and £1,760 respectively.

After the 30d, the best sellers in the X5 range are the 40d, 25d and M50d; M Sport is by far the most popular trim. All models come with an eight-speed auto box; there’s no manual option. 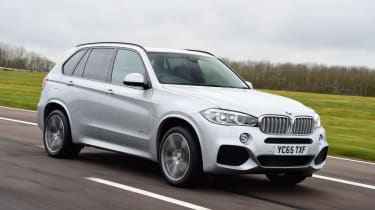 None of the engines is a poor choice, because even the entry-level 25d is perky enough; the 30d and 40d make the most sense overall, though, especially if you’re towing.

Alternatives to the BMW X5

The X5’s main rival is the road-biased Audi Q7, which offers most of the BMW’s qualities, including excellent engines, luxurious interiors, high purchase and running costs, plus a third row of seats that’s a bit cramped for adults. All of those traits are shared by the Mercedes GL, too, but if you need a proper seven-seater then only the Land Rover Discovery will do; it can also cope with off-roading and is a brilliant tow car. If only it were a bit more reliable.

More dynamically engaging are the Range Rover Sport and Porsche Cayenne, both of which are luxurious, fast and great to drive, although the Cayenne is restricted to five seats only.

The X5 gets five seats as standard; a third row was available as an optional extra on all models.

2017 model year cars get an improved iDrive 5 set-up, which is much better than before.

All diesels must be topped up with Adblue periodically; the filler for the 8.5-litre tank is located under the bonnet. 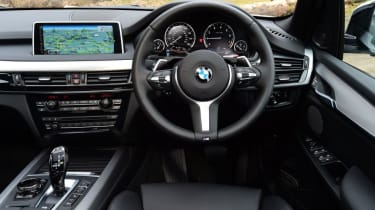 The X5’s interior is beautifully built and it’s also an ergonomic masterpiece that offers plenty of head and legroom for those in the first two rows. However, the third row of seats (where fitted) is cramped.

The standard seats are superb (M Sport items are even better) and the spacious boot can stow 650 litres, or 1,870 litres with row two folded. 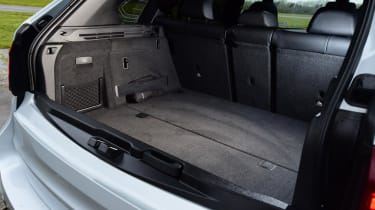 The Mk3 X5 has been recalled four times. The first was in May 2014 for faulty child locks on soft-closing rear doors. Then, seven months later, the next campaign was for possible seatbelt mounting failure in a crash.

The third and fourth actions in December 2016 were for possible power steering failure and a poor electrical connection potentially leading to the engine cutting out.

The X5 hasn’t appeared in our new or used Driver Power satisfaction surveys, but check out the owner reviews on our sister site Carbuyer.co.uk and it’s clear this is an appealing SUV. Drivers love the mix of performance and relative economy, comfort and space, plus build quality. The result is an average score of 4.4 out of five.