Rover CityRover - the worst cars ever

The end of MG Rover was comprehensively hastened by the launch of the CityRover, a small car with few redeeming qualities 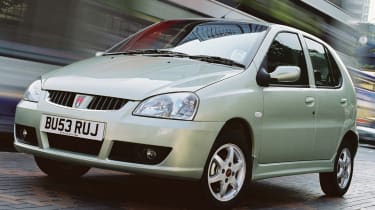 While the Allegro and Marina were symptomatic of the British car industry of the Seventies, in some ways the CityRover became a poster child for the demise of MG Rover in the Noughties. The supermini could have helped to turn the firm around, but in reality it was too little, too late for the company.

Like the Alfa Romeo Arna, the CityRover was produced out of necessity by a company with limited resources to build a new car from scratch. In this instance, MG Rover needed a new supermini to slot in below the Rover 25, and in essence be a spiritual successor to the Austin/Rover Metro. With no obvious options from Europe, MG Rover looked to the East, and the Indian-built Tata Indica looked to fit the bill.

Agreements were drawn up, and in 2003 Tata's production line in Pune began assembling CityRovers. The only differences between the CityRover and Indica was the Rover grille and badges, while different suspension settings were added under the skin. Power came from a single engine, an 85bhp 1.4-litre petrol from Peugeot, which limited the car's appeal, although of bigger concern to buyers was the car's starting price at just under £7,000.

Even though the Rover badge carried some prestige, buyers weren't convinced by the CityRover's poor quality. The Indian-market Indica had already been in production for five years when the CityRover was launched, too, so it felt dated even as it first appeared in showrooms.

The reviews weren't very favourable, either. Poor quality, modest performance and vague handling all counted against the CityRover, especially as it was priced so highly. MG Rover was so concerned with avoiding negative publicity that it refused to lend a car to the Top Gear TV show. Instead, presenter James May, who was little known at the time, went undercover at a Rover dealer to secretly review one on a customer test drive.

MG Rover must have known it was on a hiding to nothing: an update in 2004 saw prices dropped by £900, but by then the damage had been done, and the writing was on the wall for the company as it finally went bankrupt in 2005.

And the CityRover wasn't revived when Chinese firm SAIC brought MG back to the UK. Instead, it introduced the all-new MG3, a decade after the CityRover first hit showrooms.