FSO Polonez - the worst cars ever

A poster child for communist cars in the UK, the FSO Polonez was Eastern Bloc austerity made metal 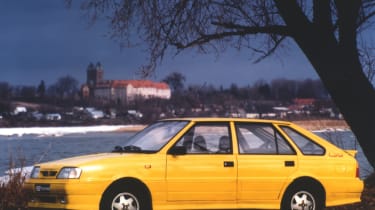 If it wasn't for Fiat, many Eastern Bloc countries of the seventies and eighties wouldn't have had a car industry at all. Lada in the USSR, Zastava in Yugoslavia and FSO in Poland were all sustained by building licensed versions of old Fiat saloons. And for the latter, Fiat-sourced family car production kept it in business for 45 years.

The FSO Polski Fiat 125p was built by the state car manufacturer from 1967, and by 1978, it was feeling old even by Eastern Bloc standards. So the company set about producing the Polonez to replace it. We say new, but the Polonez used exactly the same chassis as the 125p, while the asthmatic 1.3 and 1.5-litre engines were carried over with minor revisions.

What set the new car apart was its hatchback body. The five-door replaced the upright saloon body of its predecessor, and it had lines penned by leading Italian design legend Giorgetto Giugiaro, with assistance from Walter De Silva, who now heads Volkswagen design. With such alumni drawing the lines, you might expect the car to be a design icon. And it is, for all the wrong reasons. The long wheelbase, narrow track and extended front and rear overhangs meant the Polonez was no looker, made even worse if you went for a later car with a 'sporty' bodykit.

The plan was for the Polonez to use a new 2.0-litre engine from Fiat, but a lack of funds meant this didn't happen, while the new car and ageing Polski Fiat stayed in production side-by-side for another 13 years!

The Polonez was big, but the puny engines meant it was no scorcher. Later cars finally had engines sourced from Fiat, while other motive power came from Ford, Peugeot and even Rover's K-Series petrol. One of the main attractions of the Polonez was that it offered a lot of car for not much money, which crash tests of the period proved that it was strong in the event of an accident.

Quite shockingly, the Polonez stayed in production in various guises until 2002, although once the Eastern Bloc crumbled, and decent second-hand cars became available, the Polonez was done for outside of its home market. UK sales ended in the mid 1990s, and today the Polonez has all but disappeared - the DVLA currently has 10 registered examples on its books.