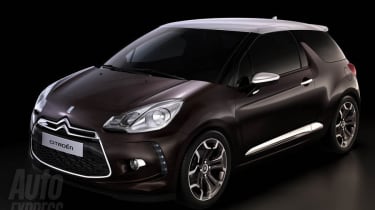 Watch out MINI! This stunning machine is an all-new small luxury car from Citroen, and not only does it revive the legendary DS badge but it will spearhead a fresh range of premium Citroen models.

The exciting news was announced at a special event on the Champs Elysees, Paris, where this remarkable model took pride of place. Called the DS Inside, it’s a concept that points the way to a production version, which is set to go on sale in early 2010.

Similar in size to a C3, the DS Inside has been designed to compete with prestige-badged small cars such as the MINI, Alfa Romeo MiTo and the forthcoming Audi A1.

The first of a new range of premium Citroens that will all carry the DS badge, it will most likely be tagged DS3 when it reaches showrooms early next year. A C4-sized model, called the DS4, and a C5-sized car, called the DS5, will follow it.

The original DS, which was launched back in 1955, was one of the most important models in Citroen’s history and the French firm is hoping to draw on its legendary reputation for luxury, innovation and style with its new premium line-up.

While the DS name was a play on the French word déeesse, meaning goddess, the new badge stands for Different Spirit. And as you can see from these amazing pictures, the new model certainly stands out.

At the front is a characterful face with large headlights and a Ford-esque trapezoidal lower grille. Outlined in chrome it encompasses the traditional Citroen double chevron badge. However, above it sits an entirely new rectangular badge, which features a rearranged version of the double chevron motif, marking out the new Different Spirit model.

Circular spotlights and LED lights ahead of the front wheelarches are further neat touches, but the most striking part of the design is the reverse angled B-pillar, which starts just above the rear wheelarch and finishes just short of the floating roof.

In a cheeky nod to the MINI, the DS Inside boasts a contrasting white roof but with chunky wheelarches, chrome side details and striking taillights, further highlighted with chrome, the stylish machine looks every inch the luxury Citroen.

Citroen is remaining tight-lipped about the DS Inside’s specifications with more information expected when the car makes its Geneva Motor Show debut in March. Insiders have hinted that the new models will not simply be re-badged C3, C4 and C5s, although it’s highly unlikely Citroen would invest the enormous amount of money required to develop a totally separate line-up – especially given the current financial climate.

So expect the DS3 to share much with the next-generation C3, including its platform and some of its turbodiesel engines including a hybrid drivetrain. As you can see from this concept car, the French firm has certainly created a striking look and that’s expected to continue inside with a high quality cabin that raises the bar set by the C3 and C4 Picasso models, C5 and C6 large cars, using the most luxurious materials yet seen on a Citroen.

The original DS was famous for its pioneering innovations, which included headlights that swivelled with the steered wheels, pneumatic suspension and an aerodynamic body. So expect the DS3 to boast adaptive headlights and the very latest example of Citroen’s Hydractive suspension system, which will allow various driving modes, at the very least.

One thing is for sure, the DS range will be priced significantly higher than the existing Citroen C3, C4 and C5 line-up. With the MINI range kicking off at almost £12,000, the DS3 is likely to cost a similar amount.

Click here to see exclusive spy shots of the new DS caught out in the cold!