Brash and crude, the SRT-8 is good on straights, but less so in corners. 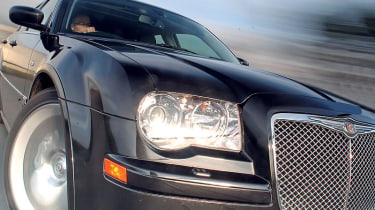 Driving The big Chrysler feels sporting the instant you fire its 6.1-litre HEMI. It burbles menacingly, hinting at vast power reserves, and is at its best when used hard; roaring, bellowing and providing startling acceleration given the car’s two-tonne kerbweight. Against the clock, the SRT-8 posted blistering times. A hesitant auto meant it was slow off the line, but it swept from 30-70mph in only 4.1 seconds, and to 100mph in less than 12 seconds. However, in everyday driving, it rarely feels that fast. For starters, the rear tyres struggle with 570Nm of torque, resulting in wheelspin even when trying to exit a junction. The sloppy throttle doesn’t help, but our biggest gripe is the five-speed auto. It’s sluggish and lazy. The brakes also fail to shine, as they feel imprecise. It’s this lack of bite that blunts the SRT8’s edge – even the steering is poor, giving little more than a rough guess as to what the front wheels are up to. However, it is actually relatively composed through smooth fast corners, though throw in some rough surfaces and tighter bends and the heavy SRT-8 soon starts to wallow. It’s fun thanks to the mighty motor, but out on the road, it comes across as loose and old-fashioned to drive.

Marketplace The ‘Street and Racing Technology V8’ Chrysler harks back to the glory days of the drag strip. Its styling has its roots in the late Fifties too. The huge chrome grille, long bonnet and slabby sides mean it’s far from modern. Yet it’s difficult to think of a car that has more road presence. Deep flanks, narrow windows and huge dimensions give it a mean look, and it has far more attitude than anything else on the road. It’s the car Batman would drive at the weekend. The flagship of the 300C range, it’s offered in both saloon and Touring estate guise, in a single trim line and with an auto-only gearbox. It has one direct competitor – the Vauxhall VXR8.

Owning Other than the two-tone grey and beige door trims, the Chrysler’s cabin is more tasteful than you might expect. It’s surprisingly understated and has reasonable stowage, although it’s also cheaply assembled from poor-quality plastics. The trim creaks, the seats are very soft and the steering lacks reach adjustment. Apart from that, driver comfort is reasonable, but when you’re sitting there, the SRT-8 doesn’t feel particularly sporting. It is very spacious though; rear legroom is plentiful and three fit abreast easily, while the boot is huge – particularly that of the Touring, which has a 630-litre capacity and a maximum load length of nearly two metres. And as for fuel economy, despite being heavy, unaerodynamic but very powerful, the 300C averaged a reasonable-for-the-breed 18.6mpg. But this is still thirsty, and adds to hefty running costs elsewhere to make the SRT-8 a very expensive car to run. It is, for example, unacceptable to have such short 7,500-mile service intervals. At least retained values are predicted to be decent.