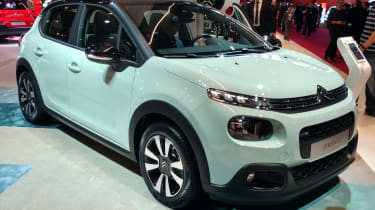 After we first saw the new Citroen C3 at a private event in Lyon, the funky new French hatch has made its public debut at the 2016 Paris Motor Show. A fresh rival for the Renault Clio and Ford Fiesta, the new Citroen C3 will go on sale in the UK in early 2017.

The C3 is seen as a crucial car for the French marque, as it’s the first mainstream model launched since Citroen’s successful DS sub-brand was carved off to become a manufacturer in its own right. After losing the DS 3 from its own line-up, Citroen needs the C3 to succeed to prove that it can still make a successful small car carrying the double-chevron badge.

The new C3’s exterior styling builds on the family traits shown in the Citroen C4 Picasso, while incorporating some key elements from the quirky C4 Cactus. At the front, there’s a mix of ultra-slim daytime running lights, neatly integrated into the chrome badge and chunky headlights, with a set of foglights mounted further down the bumper. The rear gets small tail-lights that are close in execution to the C4 Cactus’s – making use of LED technology to give extra depth to their design.

The flanks are relatively flat, but the shortage of complex metal surfacing is balanced by the inclusion of Citroen’s innovative Airbump technology. The textured protective plastic finish first appeared on the C4 Cactus, and is likely to carry across the range in future.

The new C3 will be offered with a choice of nine exterior colours and three contrast shades that appear on the roof, foglight trims, side mirrors and Airbump surrounds. Citroen claims the range will offer a total of 36 different colour combinations.

The cabin looks set to build on the ‘sophisticated simplicity’ of the C4 Cactus. The fascia has relatively few buttons, with most functions controlled through a seven-inch touch-screen that’s mounted high up in the centre of the dashboard. The infotainment system will support Apple CarPlay and MirrorLink at launch, with Android Auto functionality expected in early 2017. 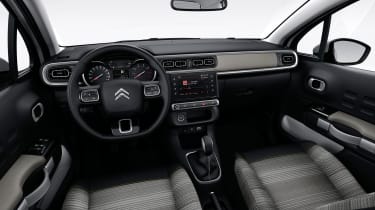 Some cues from the C4 Cactus are retained; there are still Airbump-influenced ‘indents’ on the door inlays, and the door handles are straps designed to replicate the handles on expensive luggage. The area around the glovebox looks more conventional than on the Cactus, though; it features a coloured insert that will be available in a variety of finishes and textures.

Interior personalisation will be focused on four ‘moods’. As well as the standard configuration, Metropolitan Grey brings softer shades and textures on the seats and dashboard trim, while Urban Red incorporates mixes dark and bright colours, including red stitching, for what Citroen calls a ‘dynamic feel’. The most expensive cabin mood is likely to be Hype Colorado, which has softer, more upmarket materials, special upholstery and a two-tone leather steering wheel.

The most significant new technology on the C3 is ConnectedCam, a forward-facing two-megapixel, GPS-enabled camera mounted in the rear-view mirror. It’s primarily designed to record any traffic incidents or accidents, since it activates in an impact and stores the preceding 30 seconds and following 60 seconds. However, the driver can also click a button to safely take exterior photos or videos of the view through the windscreen and then share this content through social networks.

Citroen has released few technical details about the new car, but it will continue to be based on the same PF1 chassis technology that underpinned its predecessor – as well as the Peugeot 208 and the C4 Cactus. At 3.99 metres in length, the new car is likely to be smaller than the next generations of the Fiesta and VW Polo, which are both set to grow slightly when they arrive within the next 18 months. The C3’s boot capacity looks reasonably strong for the supermini class, though, at 300 litres. The C3’s engine line-up will be based firmly around PSA’s PureTech petrol motors and BlueHDi diesels. The PureTech options will be 1.2-litre three-cylinder engines, producing 67bhp, 81bhp and 109bhp, while the diesels will be 1.6-litre units with either 74bhp or 99bhp. Stop-start will be standard across the range and while the only transmission available at launch will be a manual, a six-speed automatic is due to arrive soon after the first C3s land in UK showrooms.

As with its predecessor, the new C3 will continue to be offered as a five-door only. Its prices should be roughly in line with the outgoing model’s, with a starting figure of around £11,000.

The C3 family is set to expand over the next 18 months. As well as a replacement for the C3 Picasso MPV, Citroen is planning a small SUV version as a rival for the Nissan Juke and Vauxhall Mokka.

Would you consider a new Citroen C3? Leave us a comment below!

Welcome to our Paris Motor Show hub page. Scroll down for all our Paris content...
New Citroen C3 2020 review

The Citroen C3 supermini has been updated for 2020, but have the updates boosted its appeal?
Citroen C3 review 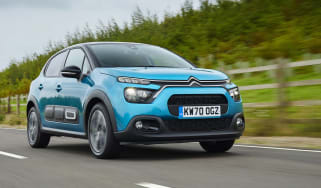