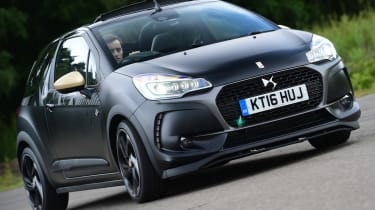 The DS 3 Cabrio Performance Black is a niche choice – especially compared to its most talented rival, the cheaper MINI Cooper S Convertible. For some the style and power will be a big draw, but this comes at a price. Although there’s plenty of speed and grip on offer, it doesn’t ride with much finesse and isn’t as fun as its competitors. The fact remains that this top spec DS 3 Cabrio Performance Black is a compromised car.

Hot hatchbacks represent some of the biggest bargains on sale today, combining performance with practicality at an affordable price. But what happens if you roll up all these traits, but add a convertible roof, premium image and plenty of style into the package too?

MINI has shown there’s a market for this kind of car in the UK with its Cooper S Convertible, and now French brand DS wants to show it can cut it in the world of souped-up superminis with its premium DS 3 Cabrio Performance Black Edition.

For your not inconsiderable £24,795, you get a 207bhp 1.6-litre four-cylinder turbo, which means plenty of performance. The 0-62mph sprint takes 6.5 seconds, but it never actually feels that fast. The engine takes a while to get into its stride and needs revving to make good progress, not serving peak power until 6,000rpm. The throttle response has a soft edge too, with the smaller engine showing signs of turbo lag.

But with a deep, bassy soundtrack from the twin tailpipes it certainly sounds the part, and with 300Nm of torque it’s more relaxing to use the fat mid-range to hustle the DS 3 along. Only when you start to pile on the speed, do the chassis’ deficiencies begin to shine through. 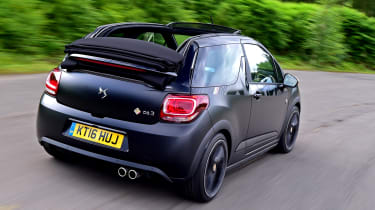 Low profile tyres smother the 18-inch alloys, and combined with the firmer suspension setup, cause potholes to crunch through the chassis. Despite its extra dynamic focus, the DS 3 never feels quite tied down, while this Cabrio version lacks the structural rigidity of its hatchback sibling so it shudders and shakes over rippled roads.

There is still plenty of grip though, and the relatively quick steering means you can throw the nose into corners, trusting the DS 3 Performance to hold on.

However, the driving position means the process of going quickly is compromised. The bespoke leather and Alcantara DS Performance seats sit you nice and low and offer good support, but the pedals stick out at an awkward angle. 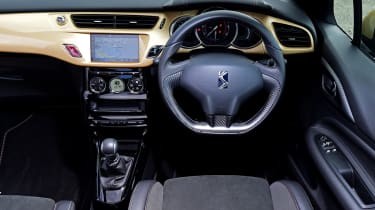 It’s not the only ergonomic flaw, either. While rivals like the MINI have been updated over the years, the DS 3’s cabin layout stretches back to 2009. The large centre console takes up a lot of space, and although room in the rear is ok, it still feels tight inside.

At least this top spec Performance Black model comes with lots of equipment – although you’d expect that for the price. Sat-nav, a reversing camera, front and rear parking sensors, an upgraded stereo, Bluetooth and autonomous braking all feature alongside the sporty visual upgrades inside and out. Mirror Link and Apple CarPlay is available for an extra £100 if you want more connectivity.

Alongside the long list of kit, the DS 3 is impressively efficient given the performance available, returning a claimed 52.3mpg and emitting 125g/km CO2. 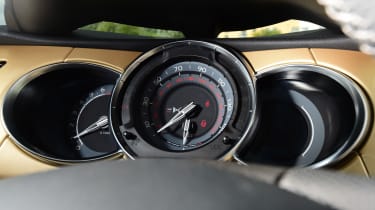 This is another base the Performance covers, but in Cabrio form it doesn’t offer much practicality. The 245-litre boot is actually relatively large, but the tiny aperture left by the convertible roof’s folding mechanism means it’s hard to actually get anything in there.

Then there’s the roof itself. It’s not a proper cabriolet – instead the canvas top just slides back along the roof rails, so while you can just about feel the wind in your hair, it’s not the full convertible experience. A MINI Convertible offers more in this department.