The 1.0 EcoBoost turbo isn't as sweet as it is in the Fiesta, while the 1.5 EcoBlue diesel is reasonable

The EcoSport should be the best driver’s car in the crossover market. After all, under the skin it features the mechanicals from the Ford Fiesta, which is one of the most entertaining superminis ever produced. Somehow, though, the DNA got lost in translation, and the first EcoSports were really quite dire from behind the wheel.

Ford responded to widespread criticism of these cars, and upgraded European-spec models with revised suspension. The results are still a bit mixed, though. The EcoSport has the Fiesta’s nicely weighted steering, but the ride quality remains lacklustre and the body still rolls quite a bit. 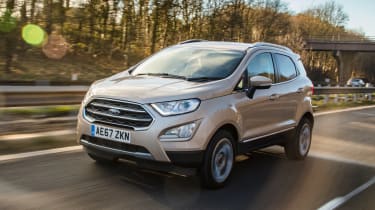 Even on ST-Line models, which come with specially tweaked sports suspension, there’s still plenty of body roll and the ride remains busy, softly wallowing around even on roads that aren’t all that bumpy or undulating.

To make matters worse, the chassis is upset by even small bumps, and due to the short wheelbase, the EcoSport seems to lumber down the road rather than float over it. This would be disappointing from any manufacturer's product, but it’s especially so from Ford, with its reputation for producing thrilling drivers’ cars.

The 1.0-litre EcoBoost three-cylinder has always been a lovely engine, and normally would be the one we’d recommend, but in the EcoSport it feels a little bit flat. Again, the extra weight compared to the Fiesta means it’s also just too thirsty when you drive it with the vigour you need to keep the crossover ticking along.

The same goes for the 138bhp version that comes only in the sportier, top-spec ST-Line models. On the plus side, it’s decently refined and economical, but with a 0-62mph time of 10.2 seconds, it just doesn't feel as quick as the figures suggest. The overall result is that it's nowhere near as rewarding as it is when fitted to the Fiesta.

You might think that a diesel is the best choice, then, but Ford’s 99bhp 1.5 EcoBlue engine feels short of torque in the EcoSport. The company claims it delivers 215Nm, but you’ll struggle to believe it, as the 1.5 feels as if it’s lacking proper mid-range punch and never manages anything other than leisurely performance, as the 13.6-second 0-62mph time will attest. 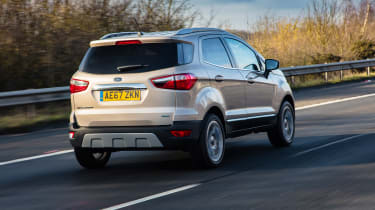 It’s around 55Nm down on the likes of Volkswagen’s 1.6 TDI diesel, and this means you have to rev it hard to get reasonable performance. For example, on the motorway, you’ll often find yourself needing to drop from sixth gear to fifth just to keep up with the flow of traffic. In turn, this does the fuel economy no favours and the engine can be quite noisy, showing its budget roots. To make matters worse there’s also a lot of wind noise above 60mph.