While the EcoSport comes with some efficient petrol and diesel engines, it doesn't make the best use of them

As most EcoSport buyers will drive their cars on urban roads, the 123bhp 1.0-litre EcoBoost petrol engine looks a strong choice. Paired with a manual gearbox, it claims up to 47.1mpg fuel economy under WLTP tests and emissions of 136g/km. These figures virtually the same for the less powerful 100PS version.

But in order to get close to the official economy figures, you have to drive the Ford EcoSport incredibly conservatively. Press on and you’ll see your fuel returns plummet, with some owners reporting figures as low as 35mpg.

Ford claims the 138bhp version of this engine also returns 47.1mpg, while the lowest quoted emissions figure is 136g/km. 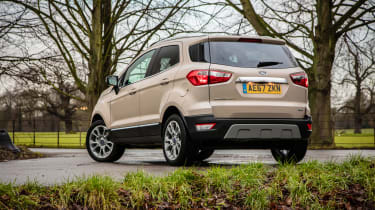 The alternative to these petrol engines is the 1.5 EcoBlue diesel, which replaced the 1.5 TDCi in 2018. It's more efficient and cleaner and comes in 100PS and 125PS forms. Owners might get near the 56.5mpg official fuel economy figure if they drive the 99bhp version gently, but most of the time, the diesel’s limited torque output dominates the experience behind the wheel, and you'll be constantly revving the engine to make progress.

We'd rather go for the 125PS version, as it has a quoted maximum of 53.3mpg, which is more readily achievable, as you don't have to work the engine quite as hard as in the 100PS version. Ford claims emissions of 139g/km of CO2, with the lower-powered unit at 128g/km.

Even if the engines don’t quite deliver on their promise, the EcoSport shouldn’t bring steep annual insurance premiums. The 1.0 EcoBoost 100PS Zetec is in insurance group 10, while moving to Titanium or ST-Line brings a step up to group 12 or 13, depending on the petrol engine you choose. Choose a diesel in top ST-Line trim, and insurance climbs to group 15.

Our experts predict that the Ford EcoSport will retain around 45 per cent of its new value over the course of three years. That’s about average for the small crossover class.