Much of the interior design is taken from the Fiesta, and the overall quality is now much improved

Since the major revisions at the start of 2018, the EcoSport has shared its basic interior layout with the latest Ford Fiesta, and the extensively redesigned cabin is the most impressive aspect of the SUV. Most of the switchgear on show is plucked straight from the Fiesta, with a similar tablet-style infotainment screen perched on top of the centre console. Just as in the firm’s big-selling supermini, it’s extremely slick to use, while the screen resolution is bright and sharp. 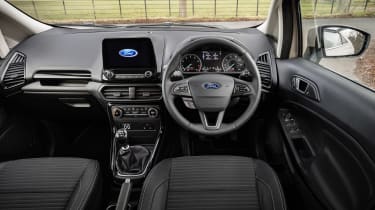 Alongside a new, clearer instrument panel are some decent interior plastics, which make the EcoSport's cabin a much nicer place to sit than in the previous model. It leaves you with a general feeling that the EcoSport is edging closer to the likes of the SEAT Arona, Kia Stonic and Peugeot 2008, but the facelift cannot work miracles, and many of the rivals have much more of an upmarket, plush feel than the Ford.

For the 2018 update, Ford upgraded the tech to include the SYNC 3 touchscreen infotainment system, available in 6.5 and 8-inch sizes, depending on trim. It comes complete with Apple CarPlay, Android Auto and DAB radio, while on Titanium and ST-Line models, the screen doubles up as the sat-nav and rear-view camera.

Ford does include its Emergency Assistance system as standard: this links to your mobile phone and automatically calls for help if you’re knocked unconscious in the event of a crash, which is a clever feature on a budget crossover like this.