Isuzu’s workaday D-Max pick-up gets hardcore Arctic Trucks makeover, and we try it for the first time 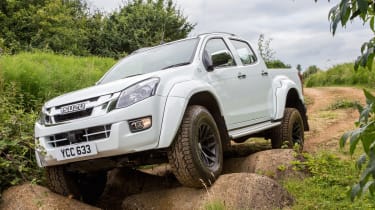 The Isuzu D-Max AT35 is as seriously capable off-road as you would expect given the involvement of a brand like Arctic Trucks. Certainly, there’s very little terrain in Britain that would stop it in its tracks. But its appeal over here is still very niche; it costs a fair bit more to buy than the standard model, while the additions affect economy and performance. For most buyers over here the ability of the regular D-Max will suffice, but there will be a few that value the AT35's unstoppable nature.

Isuzu knows the market for its D-Max extremely well – the pick-up truck is not an emotional purchase, it says, but a working tool bought out of necessity. The necessity of bringing the AT35 - a D-Max tailored by Arctic Trucks for extreme Arctic terrain - to the rather unextreme UK isn't so clear, but it's an impressive bit of kit nonetheless.

Icelandic pick-up modifier Arctic Trucks has been collaborating with Isuzu to meet the seriously demanding needs of cold weather climates for some time. A beefed-up, off-road biased D-Max has been available for a few years in Nordic markets, but now British buyers can get in on the action.

That makes humble Isuzu the first maker to sell an official Arctic Trucks conversion through 36 branches of its UK dealer network. It’s available to order in two formats: extended cab, from £30,999, and the four-door Double Cab we have here. Both are based on existing Utah spec, but add around £7,000 to the price.

The first thing you’ll probably notice is the massive 35-inch all-terrain tyres and the wider track, which combine with the 55mm ride height boost to make the AT35 125mm taller than the standard car.  The tyres are so chunky that Arctic Trucks claims the D-Max can actually float over snow slush, rather than sink into it. Other exterior upgrades include beefier side steps, a receiver hitch bar at the back, flared wheelarches and an optional branded sports bar, while you can also spec a blinding array of extra front lamps for night excursions.

The suspension has been given a thorough going over, too, with special Fox Performance dampers designed to withstand the harshest impacts. Over the extensive off-road course it impressed – making clambering over rocky and extremely bumpy terrain feel like a trip to the shops. The extra ground clearance means you’ll struggle to ground it out on any off-road obstacles you’re likely to find in the UK, while the increase approach and departure angles allow it to tackle almost vertical inclines without breaking a sweat. 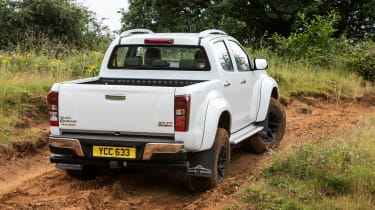 The Isuzu D-Max still does without fancy hill descent control, but the switchable low-range four-wheel drive and manual gear selector on the surprisingly smooth automatic gearbox (a six-speed manual is also available) lets you do things the old-fashioned way with engine braking. The 161bhp 2.5-litre diesel might not be as punchy or refined as the Mitsubishi L200’s unit on the road, but it has plenty of torque from low down to pull you out of trouble. 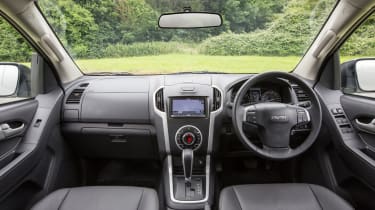 Of course, the D-Max AT35 isn’t designed to be a back-road blaster, and both handling and performance are affected by the additions. It certainly won’t outhandle a Mazda MX-5 or even a BMW X5 if that’s what you’re after, but then that’s far from the target market.

What did impress what the relative lack of tyre roar at high speed, the ability to reach and maintain motorway speeds with minimal fuss and with only the pronounced wind noise detracting. The ride is very soft, too, although it does become quite floaty the faster you go thanks to the bulbous tyres. You could, in theory, use it to go to work every day, but that would almost be a waste of its mud-plugging prowess.