The flagship 3.0-litre V6 diesel version of the Jaguar XF Sportbrake estate costs north of £50k. We see if it's worth the money... 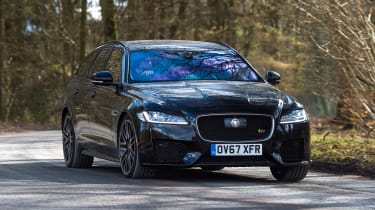 There’s plenty to like about the Jaguar XF Sportbrake in S trim with its muscle-bound V6 diesel engine. SUVs may be clouding the eyes of buyers to cars of this ilk, but the blend of sleek looks, enjoyable handling, surging performance and decent practicality, really does take some beating. You can find a slightly sharper drive and better integration of the latest technology elsewhere, however, and the 2.0d XF offers a better value package.

You only have to flick through the pages of Auto Express and familiarise yourself with the latest car manufacturer product plans to get a hint that the big diesel estate might not be the current height of automotive fashion.

The rise of the SUV and diesel’s well-documented demise would appear to to have conspired against cars like the Jaguar XF Sportbrake and its 3.0-litre V6 engine, but the gap between perception and reality can be a big one.

This Jaguar XF launched in 2015, but buyers needing extra practicality had to wait until late last year for the Sportbrake estate version to arrive. Here we’re testing the V6 diesel model in range-topping S specification, which adds various sporty styling components including a subtle body kit and roof spoiler. 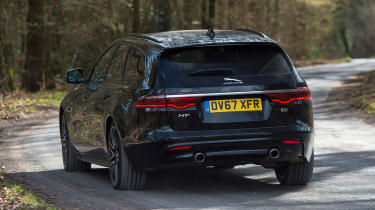 It’s rear-wheel drive – the Sportbrake’s AWD tech isn’t available with this flagship diesel unit – and all models get self-leveling air suspension at the back. If you’re expecting a pillowy, bump-obliterating ride, however, think again. This S model also has sports suspension and optional 20-inch alloy wheels – and the result is firm progress. It isn’t uncomfortable, but it comes close with the adaptive dampers in Dynamic mode.

The flipside is impressive body control for a 1,855kg executive estate, and a planted, reassuring feel through the corners. The steering doesn’t exactly come alive in your hands, but it is accurate and the overall effect is fun.

And so to the engine, which has more than enough about it to deliver the goods. The 6.1-second 0-60mph time might not sound blistering by modern standards, but the whopping 700Nm of torque from just 2,000rpm speaks volumes. The flexibility and effortless in-gear urge of a big diesel will be a big loss if the legislators get their way – and this one has that in abundance. It’ll do 49.6mpg and emit 149g/km of CO2, as well as boasting full Euro 6 compliance. 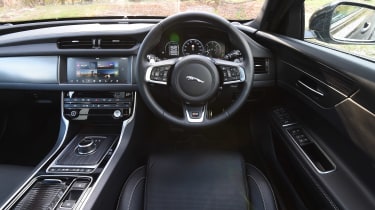 Engine refinement is impressive, too, and you’ll need to flip the eight-speed automatic down a couple ratios to hear the 3.0-litre turbo unit over the wind and the stereo. When you do, the gearbox responds swiftly and smoothly, even in its Sport setting. But the engine’s torque is such that gear selection is almost secondary in normal driving, meaning most will leave the paddles well alone.

The XF Sportbrake looks the part both inside and out, but the interior design isn’t the tech fest you get in a Mercedes E-Class and the infotainment system can be awkward to use. There’s still no Apple CarPlay or Android Auto, either, which is frustrating in a car costing this much. The grained leather sports seats in the S model are quite narrow and the offset pedals mean your right leg can rest uncomfortably against the side bolster on the base, too.

In terms of practicality, there’s a 565-litre boot that grows to 1,700 litres with the rear seats dropped. It’s not quite up to E-Class dimensions, but it’s not far off a BMW 5 Series Touring. The flat floor makes it easy to slide items in, while a 2,000kg maximum towing weight means it’s unlikely you’ll want for carrying capacity.