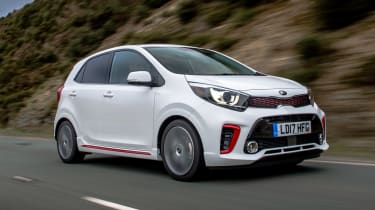 While we’ll have to wait to test it against rivals on UK roads, it’s clear that the new Kia Picanto has what it takes to ruffle a few feathers in a competitive city car class. It’s more practical, more refined, better built and significantly more fun to drive than the outgoing car, and in GT-Line trim it justifies the firmer ride by looking the part, too. We wish the 1.0-litre turbo was available from launch, however, and the lack of sat-nav on GT-Line cars means that a less showy ‘3’ spec model may be a better buy.

City cars with sporting pretensions are nothing new, but recent new additions like the Renault Twingo GT and forthcoming Volkswagen up! GTI finally offer extra performance to match their visual aggression.

Unfortunately, Kia’s racy-looking new Picanto GT-Line isn’t one of those cars. In this guise it makes do with an 83bhp naturally aspirated petrol engine – and until the turbocharged 1.0-litre arrives later this year it’s the most powerful Picanto on sale.

Kia argues that there’s a market for cars (small ones in particular) that offer a sporty design but don’t saddle owners with crippling insurance premiums and additional fuel costs. To that end, the Picanto GT-Line comes adorned with chunky front and rear bumpers, bright red body detailing, a faux rear diffuser, 16-inch alloys and, perhaps unnecessarily given the performance on offer, twin exhaust pipes. 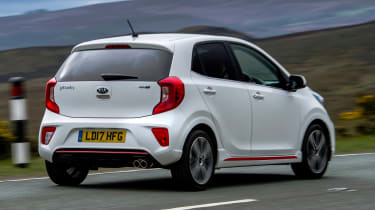 The overall effect is smart and surprisingly tasteful, with the menacing face and purposeful stance lifting what is otherwise a fairly anonymous city car. You’ll find a selection of upgrades inside, too, including a set of stainless steel pedals, black and red artificial leather and numerous chrome and gloss black details throughout. Again, Kia hasn’t gone overboard, simply adding some extra class to the 2017 Picanto’s already logically ordered, attractive and solidly built cabin.

Granted, most of the trim on the doors and dash is hard and shiny rather than soft and plush, but the same can be said for similarly-priced rivals. Our only criticism is the relative lack of colour – sister company Hyundai manages a brighter and airier look in the i10.

Nevertheless, this is undoubtedly the most upmarket city car Kia has ever produced. Visibility is good, too, and despite a lack of height adjustment on the seats and reach adjustment on the wheel the driving position is comfortable even for those over six foot. It’s also more practical than before, with enough room in the back for two adults to brave longer journeys and a class-leading 255-litre boot. 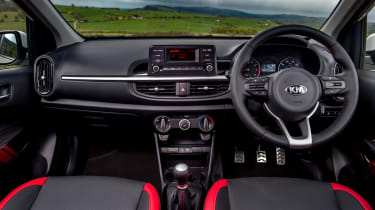 You’d be forgiven for taking one look at the GT-Line’s big wheels and assuming its ride and handling suffers in the pursuit of outright style. However, this third-generation Picanto has a body that’s 32 per cent stiffer than the old car, which combined with extra insulation means a notable reduction in noise and vibrations.

It also means the suspension can be stiffer without harming comfort, so the Picanto feels surprisingly taut and agile in the bends – and even sharper in GT-Line form thanks to subtle changes to the setup. There’s a firmer edge than the regular car due to the lower profile tyres, but it’s not uncomfortable and is composed enough by class standards. If you want the ultimate bump absorption, we’d recommend going for a regular ‘2’ or ‘3’ spec car with less style-focused wheels and tyres.

Some of the surfaces we encountered in central Italy were even worse than you’ll find in the UK, and over really rough tarmac the Picanto does hop and skip about a bit - though that’s not unusual given the low kerbweight and short wheelbase. The steering is a big improvement on the slow and gloopy rack of the old car, however, feeling positive and direct without any nervousness at speed. It even has standard-fit torque vectoring, which brakes an inside wheel to help keep the car on its intended line through a corner.

The only letdown in the package is the 1.25-litre four-cylinder engine, carried over largely unaltered from the old car. It’s a bit less laboured out of town than the base 66bhp three-cylinder, but doesn’t rev as sweetly and lacks that unit's thrummy, engaging soundtrack. It also misses the low-down punch and smoothness of turbocharged rivals. It’s perfectly adequate given the city car brief, but those who plan regular jaunts out of town should hold on for the upcoming 98bhp 1.0-litre turbo. 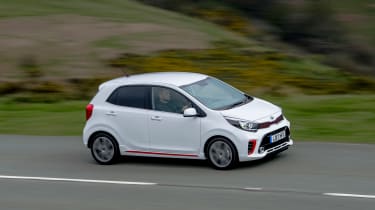 That version will command a fair premium over this car, however. Interestingly, GT-Line spec is actually a more stylish version of a mid-range ‘2’ trim level rather than building on flagship trims. Top-spec GT Line S models come more generously equipped, but are visually nearly identical and cost around £2,000 more. The £1,200 Kia asks over a ‘2’ spec for the GT Line isn’t too rich when spread out across monthly payments, while standard kit includes LED daytime running lights, electric windows, autonomous emergency braking and Bluetooth.

It’s a shame that you can’t spec the slick seven-inch touchscreen sat-nav as an option on this model, though, and as a result we’d be tempted to stump up the extra £200 for the 3 spec car and forgo the styling add-ons instead.