The new Defender is arguably the ultimate 4x4, with comfort and refinement now on a different level. 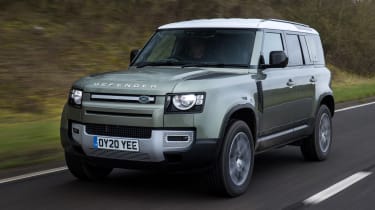 The Defender is brilliantly practical, including basics like the useful central storage bin and deep door pockets, as well as more advanced features like the standard 3D surround camera. There’s also the usual generous supply of cup-holders, power outlets and air vents around the cabin. Overall refinement is good and the front seats have plenty of adjustability, so you can easily find the most comfortable position.

Move up from the base Defender trim to the S equipment line and you’ll gain extra kit such as an armrest and automatic headlights, and there are also clever touches to help you with towing - the on-board cameras assist when lining-up a trailer, while the air suspension can raise and lower to make hitching-up easier.

The ClearSight system is another handy addition for Defender drivers and comes with Mirror or Ground functions. The rear-view mirror can be used normally, but is also able to display a rear-facing camera feed when the rear screen is too dirty to see out of. The 10-inch touchscreen also relays camera footage, which can be used to help you see beneath and just in front of the vehicle - invaluable when off-roading. 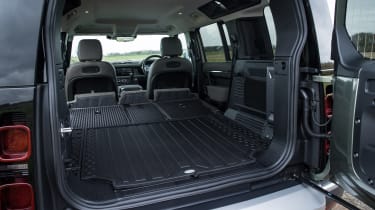 There’s no disguising that the Defender is a big 4x4. The three-door 90 model is 4,583mm long (including the spare wheel at the rear) and 2,008mm wide with the side mirrors folded-in. It stands 1,974mm tall, with the 110 version just a touch lower at 1,967mm. The five-door variant is unsurprisingly longer at 5,018mm, although overall width is the same as its smaller sibling.

There’s plenty of room upfront in the cabin and, if you want, you can specify an extra seat between the driver and front passenger. In the 110 model, you can add a further two seats in the boot to make it a seven-seater, but strangely not when the front row middle seat is specified. The middle seats provide ample space and have a sliding function, which helps accommodate taller passengers in the third row.

The Defender 110’s boot space is the most practical. There’s 231 litres with all three rows of seats in place, 916 litres with two rows in the upright position and a van-rivalling 2,233 litres with all but the front seats stowed in the floor.

Customers will be reassured that the Defender remains a supreme towing machine.  Most versions have a maximum towing limit of 3,500kg, although the P400e plug-in hybrid is restricted to 3,000kg.