Long-awaited BMW X3 challenger revealed: the new Mercedes GLC will be on sale in October 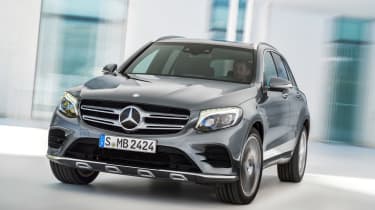 We've been chauffeured around in a camouflaged prototype and seen countless spy shots, but it’s only now that Mercedes has fully revealed its BMW X3 and Audi Q5 rival, the GLC.

Replacing the Mercedes GLK SUV in its global line-up (a car that was never converted to right-hand drive or sold in the UK), the GLC is based on the same underpinnings as the new C-Class, but offers more interior space than the saloon and is claimed to have class-leading off-road ability.

Elements of the C-Class’ design are everywhere on the Mercedes GLC, from the converging creases along the flanks, to the soft-edged grille housing a huge three-pointed star. Unlike the smaller GLA, though, which takes the form of a lifted hatchback rather a true SUV, the GLC is more raised and rugged, but still cuts a sleek profile. In fact, at 4,656mm long, 1,890mm wide and 1,639mm high, it’s shorter, wider and lower than an X3. 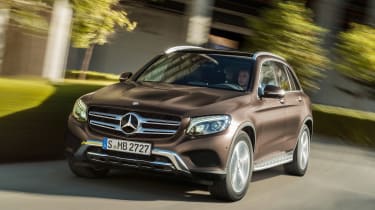 Customers can choose between three exterior styling packs – standard bodywork, a version optimised for off-road use with better approach and departure angles plus underbody protection, and an AMG version with deeper bodywork and bigger wheels (up to 20-inches in diameter).

Anyone familiar with the C-Class’ cabin will feel at home in the GLC, which has a near identical design. Dominating the centre console is a tablet-style screen (controlled via a wheel and a touchpad with hand-writing recognition) perched above a trio of bulls-eye vents. A full-length panoramic roof is optional, and helps to accentuate the feeling of space in the rear; legroom is almost on a par with the E-Class, says Mercedes. 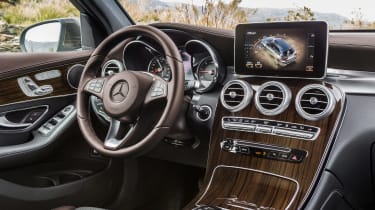 Boot space is virtually identical to rivals, at 550 litres with the rear seats in place, or 1,600 litres with the 40:20:40 split rear bench folded down – achieved by pressing a button mounted in the boot. However, to create another 30 litres with the bench in place, it can be locked in a more upright position. Order the optional Air Body Control air-suspension and the boot lip can be lowered by 40mm, plus the electric tailgate can be opened by waggling your foot under the rear bumper.

The GLC comes with steel springs and adaptive dampers as standard, and, of course, the optional air-suspension. The latter automatically drops the car by 15mm when you select Sport on the five-stage Dynamic Select system, and if you order the optional Off-Road pack can raise the GLC by 50mm for improved ground clearance. 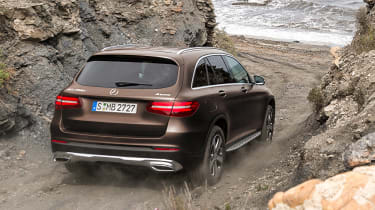 With the Off-Road pack you also get five selectable modes – Slippery, Off-road, Incline, Rocking assist (to help extricate the car when it gets stuck) and Trailer.

From its UK launch in October, all versions will come with Mercedes’ 4MATIC four-wheel-drive system as standard and a nine-speed automatic gearbox, although a more affordable rear-wheel-drive model will follow in 2016.

While left-hand-drive versions have a permanent torque split of 45/55 front/rear, right-hand-drive UK models have a smaller front differential and therefore a 31/69 torque split. Mercedes claims that makes UK cars even more fun to drive.

We got our first idea of the GLC’s styling from the GLC Coupe concept shown at the Shanghai show in April, but that wasn’t its only purpose. It previews a sportier sister car to the GLC that won’t be far behind. We spoke to Uli Zillmann, project leader for the GLC’s development, who told us: “The GLC Coupe is extremely interesting as it lets us have much sportier version with mixed tyre sizes, 20-inch wheels and sports suspension.”

And when we asked about the posibility of a full-fat GLC 63 AMG, using the new twin-turbo V8 from the C 63 AMG, Zillman clarified the strategy: “I don’t think a full AMG V8 version is right for the GLC, but perhaps something like that - like an AMG Sport model. Full AMG is a better fit for the GLC coupe.”

A V8-powered, compact SUV with coupe styling - now that would give the BMW X4 something to think about.