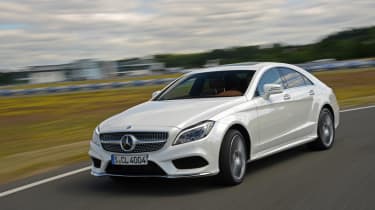 Don’t overlook the new four-cylinder diesel Mercedes CLS 220 BlueTEC, the cheapest, most efficient member of the range is still a rewarding drive, thanks to better refinement than the equivalent C-Class and a new nine-speed gearbox. However, the UK tragically misses out on the nine-speeder, meaning the CLS 350 V6 remains the sweet spot of the range.

First things first: UK buyers can’t have Merc’s brilliant new nine-speed gearbox in this entry-level 220 BlueTEC version of the new facelifted Mercedes CLS, and that’s a crying shame. Due to right-hand drive packaging difficulties, the UK will only pair this engine with the 7G gearbox, although it can be ordered on the six-cylinder 350 BlueTEC model.

The new 175bhp 220 BlueTEC effectively replaces the old 204bhp 250 CDI model in the line-up, sacrificing some performance for improved economy and lower emissions, although the £46,500 price tag is £150 higher. So what else are you getting for your cash?

There are subtle styling changes to the whole CLS range, including a revised grille, trick new LED lights, new bumpers similar to the E-Class, and a eight-inch ‘floating’ infotainment screen in the cabin.

Elsewhere, the cabin is starting showing its age, with the continuation of the dated telephone-keypad buttons, which the new C-Class’s cabin has mercifully done away with.

The new CLS also does without the touch-sensitive hand control that the new C-Class and S-Class enjoys, due to its last-generation electrical architecture beneath the surface. Excellent material choice and fit and finish make such foibles easier to forgive, however. 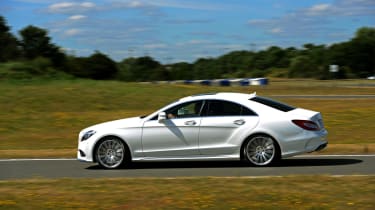 As you’d expect, this new four-cylinder diesel engine, robbed from the new Mercedes C-Class, scores well in the economy stakes, offering a claimed 61.4mpg and hatchback-matching CO2 emissions of 122g/km. However, much of the credit for the fleet-friendly figures must go to this new nine-speed automatic gearbox.

Mercedes says the ‘9G-Tronic’ achieves the holy trinity of shifting both faster and yet more smoothly than the ‘7G’ transmission, while upping efficiency by around 20 per cent. UK cars equipped with the 7G gearbox therefore take two tenths longer from 0-62mph, with economy and emissions of 56.5mpg and 129g/km.

To demonstrate what we’re missing here in the UK, we chose a test car equipped with the 9G transmission and on the road its fast shifts make the most of 400Nm from 1200rpm to 4000rpm. A 0-62mph sprint in 8.3 seconds is respectable, as is the in-gear punch, and we found it resists the urge to kick-down needlessly like some other eight or nine-speed transmissions. The four-cylinder is far more muted than its application in the C-Class, and with less weight over the nose than the V6 or V8 models, the 220 turns in sweetly and feels more nimble when threaded along a twisting road.

Underneath, Mercedes hasn’t fiddled with the CLS’ chassis during its refresh, but there was no need to fix what wasn’t broke. It’s a subtle mix of engaging and relaxing, with just enough steering feel to keep you entertained, while the body control feels a notch better than the E-Class. Even our AMG-line test car rode superbly over UK roads, despite wearing 18-inch alloy wheels. Switch the dampers from Comfort to Sport mode and you’re rewarded with an even sharper turn-in, at the expense of decent body control. Comfort is the default mode, and rightly so, suiting the CLS’s mature character to a tee. 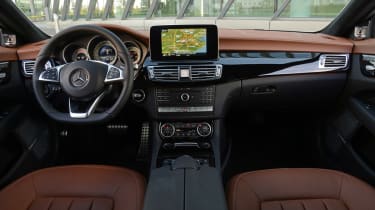 The only drawback is a niggling sensation that the CLS feels like a car designed to be powered by six or eight cylinders. Our suspicions were confirmed by a drive of the revised CLS 350, which combines the impressive 9G-Tronic gearbox with a creamy V6 producing 255bhp and 620Nm of torque.

Although the front end doesn’t feel quite as sharp as the 220, the bigger engined car has meatier, more satisfying steering, makes a more expensive noise, and is amusingly quick, rather than simply adequate. Plus, it does get the excellent new gearbox than the four-cylinder engine can’t be ordered with in Britain.

The baby of the CLS range is an excellent addition to the family, but if it were our money, we’d do our damnedest to scrape together enough for the more effortless-feeling CLS 350, which is one of Mercedes’ best all-round packages.