We get our first taste of the wafty new Mercedes E-Class Coupe - is it any good? 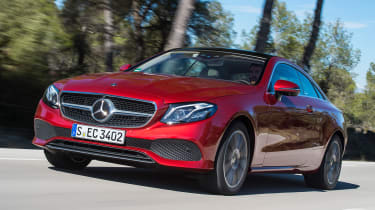 The Mercedes E-Class Coupe makes a great first impression with its sleek looks and bold front end – but just like the saloon, it matches that with a superb interior and composed drive as well. While the focus on comfort means it's not as sporty as it looks, the E-Class Coupe makes an excellent cruiser that can still be fun on the right road. The 2.0-litre diesel tested here is economical and punchy, making it the best choice for most buyers.

The all-new Mercedes E-Class made a superb first impression when it arrived last year, so we had high hopes for this new Coupe version - especially as it looks sleeker than ever and features the same updated engines and interior as the excellent saloon model.

The E-Class Coupe was already a good-looking car, with elegant grand tourer-style looks. But this new model raises the game, with a long, sloping roofline that lifts into a small boot spoiler.

Perhaps the best feature of the E-Class Coupe's design is the fact that there's no B-pillar, which means the window line is unbroken with the glass lowered. It has big benefits inside as well, since there's no light-blocking pillar. It's an airy cabin, and all-around visibility is very good. 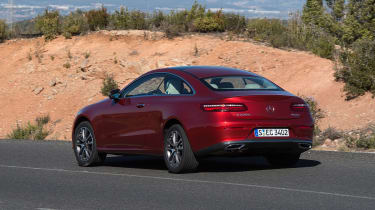 Thanks to the new platform, the latest version of the E-Class Coupe is 123mm longer and 74mm wider than before - but for many, the crucial new dimension will be the longer wheelbase, which features an extra 113mm of metal. That means there's more legroom for rear-seat passengers, allowing adults to get comfortable in the back for the first time. The slow-moving electric front seats are a bit annoying when hopping in and out, however.

The interior is just as plush and upmarket as in the saloon. Everything feels well built and high-quality, and the comfortable seats and intuitive infotainment system mean it's easy to feel at home inside. The new 'turbine' vents that look great, but sadly aren't very good at directing airflow.

Looking out over the bonnet, you'll notice the two power bulges, which hint at some extra performance, but the E-Class Coupe isn't noticably sharper than the saloon to drive. The steering is well weighted and accurate, but since the Coupe is heavier than its stablemate, it feels marginally less agile in the corners. The difference is small, but it's hard not to expect more from the sporty-looking Coupe. 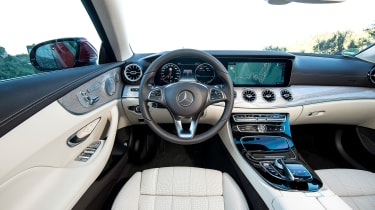 Where the E-Class Coupe excels, then, is on longer journeys. We tested models on standard steel springs as well as the optional air suspension, and both felt very supple at speed – ironing out the lumps and bumps without feeling too floaty. The air option is much better at low speed, though, as the standard set-up felt a little rough on some of the bumpier Spanish roads we came across, though we'll have to try the car in the UK for a final verdict. Still, there's not much at this price that can match the E-Class for comfort.

It's very quiet on the motorway, too, with the 220d's 2.0-litre diesel staying fairly hushed at 70mph – with wind noise kept out as well. The engine is the same unit as in the saloon and estate, and just like in those models it's likely to be the top choice thanks to low CO2 emissions (106g/km) and admirable 70.6mpg fuel economy.

Despite this, performance is decent. It's not going to set your trousers on fire, but it’ll sprint from 0-62mph in 7.4 seconds – while the E220d's 400Nm of torque means it feels punchy enough to have some fun. It's good for overtaking on the motorway as well, and the smooth nine-speed automatic gearbox shifts quickly, never feeling like a hindrance. 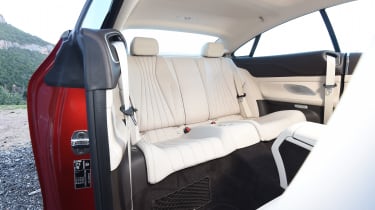 Long-distance travel is also helped by the large 425-litre boot, which will easily swallow luggage for a weekend away. However, while rear-seat passengers will appreciate the extra legroom, that sloping roofline means a long trip could result in some neck pain.

One advantage the E-Class has is that if you're looking for a luxury coupe for around £40,000, it doesn't really have any direct competitors. You could go for a smaller Audi A5, but the E-Class is more comfortable, better looking and even more efficient than that car in S line 2.0 TDI Ultra trim.