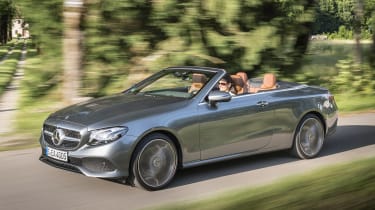 The new Mercedes E-Class Cabriolet blends some of the most appealing qualities in the drop-top market. It provides a healthy dose of the S-Class' opulence, and feels more special than the C-Class, while being priced neatly between the two. The E 220d offers low running costs and decent performance, and while this isn’t the most entertaining cabriolet to drive, the engine's refinement fits in well with the car’s impeccable cruising manners. Just don’t go overboard with the options.

The British summer is about as predictable as a rampaging bull, yet we Brits continue to buy more convertibles than the French, the Italians and the Spanish; only Germany buys more.

Mercedes is tapping in to this drop-top love affair, offering more convertibles in its range than any other carmaker.

This new E-Class Cabriolet is the latest addition, slotting neatly between the C-Class and S-Class four-seat drop-tops to offer a compromise between luxury and value. We’re driving it for the first time to see if it really is the sweet spot in Mercedes’ range. 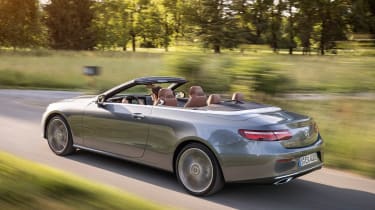 The first thing to note about the new E-Class Cabriolet is its growth in size. At just under 4.83 metres, it’s a full 123mm longer than the previous model, as well as being 74mm wider and 30mm taller.

This extra capacity means that four adults can withstand long distances in relative comfort – despite the rather upright rear seatbacks – and the boot is a sizeable 385 litres with the roof up. There are also split-folding rear seats, meaning this is one of a select number of convertibles that could even be used as a main family car.

But style and desirability are key here, and in that area the sleek E-Class Cabriolet is fighting fit. The imposing front end and long bonnet give it both presence and class, while at the rear you’d be hard pushed to tell it apart from the more expensive S-Class Cabriolet. Only the optional (and rather ungainly) ‘Aircap’ wind deflector mounted on the windscreen surround spoils the look, but at least it can be electrically retracted. 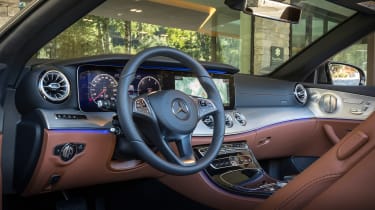 Owners will also want to lower the roof just to let people look in, because the E-Class Cabriolet has a spectacular cabin.  As in the saloon and Coupe, the quality and detailing are exquisite, with top-notch materials and plenty of neat features.

The E-Class’s fabric roof is a multi-layer acoustic hood derived from the S-Class, and it opens or closes in a respectable 20 seconds at up to 31mph. With it up the E-Class is commendably subdued; with it down you can easily hold a conversation at 70mph. The Aircap is a bit disappointing, however; it makes the cabin a touch less blustery at speed, but brings with it a fair bit of wind noise that spoils the experience.

Mercedes predicts that the E 220 d diesel we’re driving here will be the strongest seller. As in the saloon and Coupe, it features the firm’s new 2.0-litre engine with 191bhp and 400Nm of torque. It’s impressively smooth and relaxing, and performance is respectable. It’s far from rapid, but feels effortless when cruising.

The relaxed pace of the diesel is more suitable, because the E-Class Cabriolet isn’t a car that you’ll relish threading down your favourite B-road. The handling is composed enough but like the Coupé, the Cabriolet doesn’t feel particularly light on its feet. 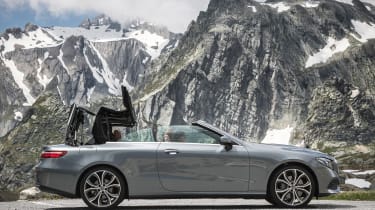 Better instead to keep it in Comfort mode, making the most of the E-Class’s impressively plush and refined ride – although we’d recommend avoiding the 20-inch wheels that can thump over really pockmarked tarmac. They also expose a little shimmy and shake in the Cabriolet’s frame that we would suspect isn’t evident on examples with smaller wheels.

The E 220 d starts at £44,675, but our test car had been fitted with options that took its price to close to £55k. Still, it doesn’t really have any rivals at this price point, sitting between smaller four-seat cabrios and more expensive (yet not substantially better) models such as BMW’s 6 Series Convertible.