The MINI Cooper S Works 210 sits between the standard Cooper S and JCW models with 207bhp, but how does it drive? 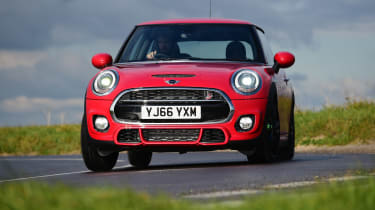 The MINI Cooper S is already great fun to drive but this Works 210 model’s power boost and louder exhaust add an extra level of enjoyment to the mix. The improvements aren’t enough to beat a Ford Fiesta ST Mountune, as the MINI is not quite as fun to drive and it’s a bit more expensive. It’s arguably better as an everyday car than a John Cooper Works, though, and still has plenty of performance.

The MINI Cooper S Works 210 is a new model that bridges the gap between the standard Cooper S and the more hardcore John Cooper Works hot hatch. It costs £2,710 more than the Cooper S, and for that you get a series of upgrades including more power.

It’s a rival for the Ford Fiesta ST200, or perhaps a standard ST with the official Mountune upgrade pack installed - especially since the main upgrades are installed by your MINI dealer.

The Works 210 comes out of the factory as a standard MINI Cooper S, but with a JCW bodykit. That means it gets the front and rear bumpers from the hotter model, plus 17-inch alloy wheels and a big roof spoiler. The dealer then fits a new exhaust and an ECU upgrade to bring power up to 207bhp (from 189bhp). 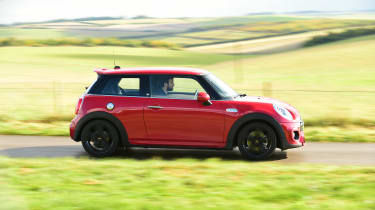 It’s not just a bigger exhaust, though: it’s the same system you get on the racy MINI Challenge, and features a Bluetooth controller that lets you open the valves and set it into Track Mode - which is louder than road regulations allow.

Even in standard mode the exhaust sounds great, with a few pops and crackles on the overrun, but in Track Mode it’s something else altogether, with a deep growl at idle building up to a roar at high revs. It adds a new level of fun to the Cooper S, and although the engine itself isn’t the most characterful you can’t help but love the madness of it.

You can feel the extra power on the road, especially at the top end. While there’s still a useful lump of mid-range torque that means the engine is flexible, the best of the pull comes when you push harder towards the limiter.

The Works 210 is not as quick as a JCW model, but the advantage of this car is that it’s easier to live with every day. The suspension set-up is more forgiving on British roads, and while it’s not exactly supple, it doesn’t scramble and skip over bumps as much as the one in this car’s hotter sibling. 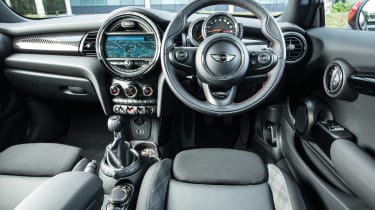 Of course, as it’s a Cooper S, it’s great to drive as well, with well-weighted and direct steering, good body control and lots of grip. It darts around tight corners like little else, save for a Fiesta ST - which is not only better to drive, but it’s cheaper too. The base price for the Cooper S Works 210 looks like decent value, but you’ll pay through the nose if you so much as look at the options list.

The Fiesta is a thorn in the MINI’s side as usual, offering a better overall package, but the MINI does beat it for style. This is a cool car and the JCW add ons for the Works 210 model strike a good balance between the chic look of the basic version and a pumped-up race car.

It’s not as practical as a Fiesta ST, though, with just 211 litres of boot space, where the Ford has 290 litres. There’s not as much rear legroom either. Still, the interior has a funky design that’s no different from a standard Cooper S and it feels more upmarket than the Ford.