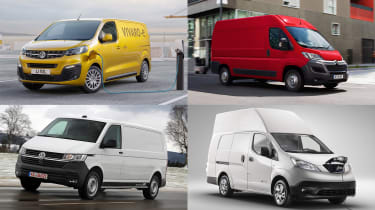 While the focus has been squarely on electric passenger cars in recent years, manufacturers are now coming around to the idea of electric and hybrid vans – especially as regulations shift to encourage businesses to use zero-emissions vehicles for last-mile deliveries in cities.

Already available are the likes of the LDV EV80, Nissan e-NV200, Renault Kangoo Z.E. and Renault Master Z.E., while Ford has launched a plug-in hybrid Transit and Mitsubishi offers a commercial version of its Outlander PHEV plug-in hybrid SUV.

With ever more cities planning to introduce low-emissions zones in the coming years, vans like these are set to become more and more important to businesses that want to keep working in urban areas.

If you're a business owner, or run a van for daily errands, you could save a fortune by switching to electric. And as technology develops, electric vans' range and payloads are improving, too.

Here's a rundown of some of the most important models that have launched in the past 12 months, or are just about to launch... 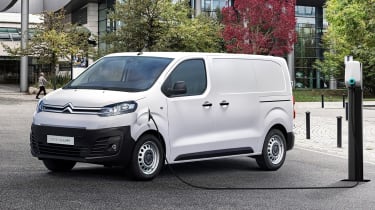 The PSA Group – parent company of Citroen, Peugeot and Vauxhall – is launching electric versions of all its mid-size vans in 2020. Citroen's is called the e-Dispatch and will offer a choice of two batteries: 50kWh for a 143-mile range, or 75kWh for a 205-mile range.

As with the diesel-engined Dispatch, there'll be a variety of body lengths to offer flexibility in terms of payload and carrying capacity. Citroen says the electric Dispatch will offer improved comfort compared to the diesel, with “limited noise or vibration” thanks to the electric powertrain.

Read more about the Citroen e-Dispatch 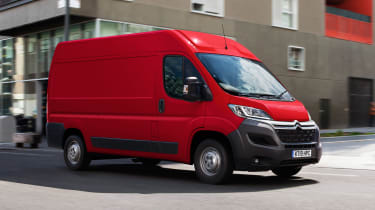 It'll be offered in 'L1' and 'L3' bodystyles, with the latter featuring a longer wheelbase and greater cargo-carrying capacity. Citroen says the L1 version will travel 141 miles on a charge, and the L3 will manage 169 miles. However, these figures were calculated under the now-discontinued NEDC testing process, so it remains to be seen how they'll get on in real-world conditions.

Read more about the Citroen e-Relay 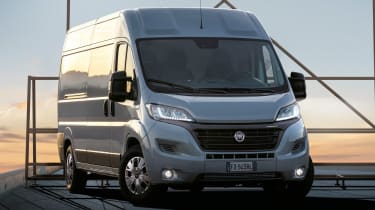 A sister model to the Citroen e-Relay above and Peugeot e-Boxer below, the e-Ducato was announced in July 2019, before the merger between Citroen and Peugeot's parent PSA and Fiat's parent FCA came about.

Fiat says the Ducato Electric will be offered in the same range of body variants as the diesel equivalent, with load volumes from 10 to 17 cubic metres and a maximum payload of 1,950kg. Its motor will produce just over 120bhp, while a range of battery sizes will offer ranges from 136 to 223 miles (albeit calculated using the old NEDC test method).

Read more about the Fiat e-Ducato 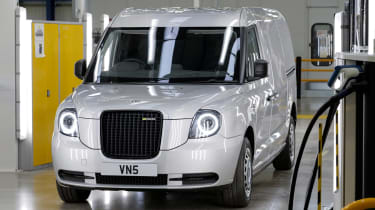 It'll use a 1.5-litre three-cylinder petrol engine from sister company Volvo, as well as an additional electric motor to power the rear wheels. The same system can be found in the current LEVC taxi, and the same pure-electric range of 80 miles is promised here.

Initially, the van will be available in just one body style: a regular medium-sized panel van with 'barn doors' at the rear and a sliding door on the side. However, LEVC hasn’t ruled out different variants in future. 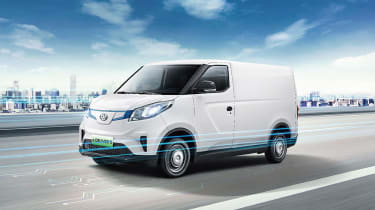 The E Deliver 3 was first unveiled at CV Show in 2019 as the LDV EV30, but following LDV’s rebrand to Maxus earlier in 2020, the van has been renamed. A smaller counterpart to the company’s EV80, the zero-emission small van comes in two body lengths (short and long wheelbase) offering drivers flexibility in terms of payload and carrying capacity.

The van also come with a choice of two battery sizes: 52.5kWh (which offers up to 149 miles from a charge in the short-wheelbase model, or 142 in the long-wheelbase) and 35kWh, which gives short and long-wheelbase ranges of 98 and 93 miles respectively. The van is available to order now, with prices starting at £24,000 before VAT, but after the government plug-in van grant has been deducted. 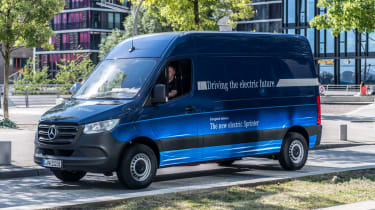 The eSprinter is basically a larger version of the eVito below. It uses a 113bhp motor and 55kWh battery for a claimed range of up to 96 miles, with the option of either 20kW or 80kW DC charging; the latter can charge from 10 to 80% in half an hour. There's only one trim level available to keep things simple, but standard kit includes a heated driver's seat, DAB radio and a range of useful active safety systems.

Maximum gross weight is 3,500kg and maximum load volume is 11 cubic metres; top speed is limited to 75mph as standard but this can be reduced to 50mph as an option.

Read our full review of the Mercedes eSprinter 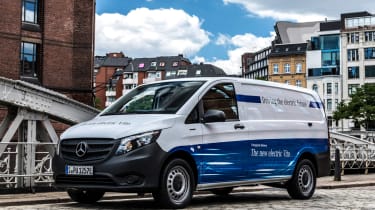 The eVito will have a range of 93 miles on a single charge, which Mercedes says is sufficient for mainly urban work – particularly for drivers or companies that complete planned, recurring routes on a regular basis. It starts at just under £32,000 in the UK, once the government plug-in van grant has been deducted.

A 41kWh battery stores power for the 113bhp electric motor, which has the same power output as the entry-level diesel Vito. The battery can be fully recharged in six hours from a wallbox charger.

Read our full review of the Mercedes eVito 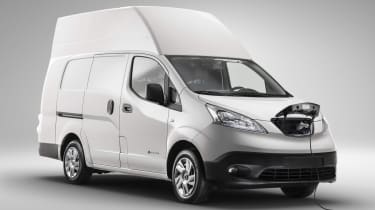 The Nissan e-NV200 was one of the first commercially available small electric vans, and now its manufacturer has teamed up with conversion company the Bevan Group to offer an enlarged 'XL' version for operators who need more cargo volume.

The extension can be applied to any e-NV200, used or new, and owners can approach the Bevan Group themselves or liaise through their Nissan dealer. Prices for a brand-new XL-converted e-NV200 start at £29,955 plus VAT. 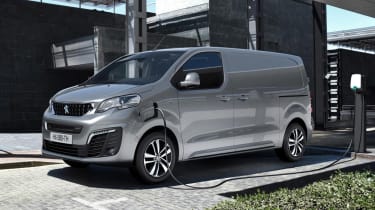 Sister model to the Citroen e-Relay and Fiat Ducato Electric above, the e-Boxer is another large electric van on the way in 2020. As with those vans, an exact UK price for the Boxer Electric will be confirmed closer to its on-sale date.

No technical details have been revealed at this stage, but as the e-Boxer shares its platform with the Relay Electric, a similar range figure of around 170 miles on the now-defunct NEDC efficiency tests can expected, translating a real-world figure in the region of 120-130 miles.

The e-Expert is Peugeot's equivalent to the Citroen e-Dispatch further up this list and the Vauxhall Vivaro-e further down. Like them, it goes on sale in 2020 and comes with a choice of two battery sizes, so buyers can prioritise range or carrying capacity as needed.

Its 50 or 75kWh battery packs will give a range of 143 or 205 miles respectively. With either pack, the e-Expert and its sister models have the same amount of load space as their diesel-engined sister models.

Read more about the Peugeot e-Expert 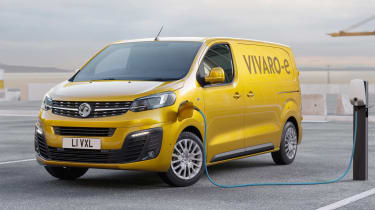 Hot on the heels of its Corsa-e electric passenger car, Vauxhall is launching a Vivaro-e electric van in 2020. It's identical under the metal to the Citroen e-Dispatch and Peugeot e-Expert above, with the same choice of 50 and 75kWh batteries for a 143 or 205-mile driving range.

Vauxhall has also mooted the possibility of a sporty 'VXR' version of the Vivaro-e, which initially would feature only visual upgrades such as large alloy wheels and a bodykit, but could eventually entail a power upgrade, too.

Read more about the Vauxhall Vivaro-e 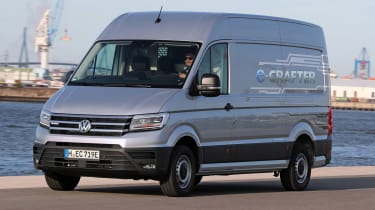 The e-Crafter competes in the same category as the Renault Master Z.E. and LDV EV80. This class is set to get very busy in the coming months with the arrival of other models on this list like the Mercedes eSprinter, Fiat Ducato Electric, Peugeot e-Boxer and Citroen e-Relay.

Volkswagen is biding its time a little with the e-Crafter, however, with UK sales not due to start until mid-2021. The large van uses the same powertrain as the e-Golf passenger hatchback, which means a 134bhp power output, a 107-mile range and a five-hour recharge time when using a 7.2kW wallbox charger.

Read our full review of the Volkswagen e-Crafter 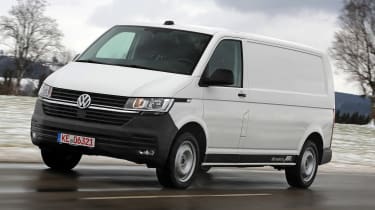 In 2019, Volkswagen revealed a two electric vans at the Commercial Vehicle Show in Hanover, Germany. The e-Caddy and e-Transporter are electric versions of the standard van, developed in conjunction with Formula E racing team and Volkswagen Group tuning specialist ABT.

The Volkswagen e-Caddy won't be coming to the UK; it's based on the previous-generation van and hasn't been engineered for right-hand-drive markets. The e-Transporter, which will use the recently-updated T6.1 van as a base, joins the line-up during 2020.

The e-Transporter looks much like the standard diesel version. ABT has announced a pair of battery packs – either 37kWh or 75kWh – although initially UK examples will only be available with the former, allowing a real-world driving range of 82 miles. There electric system has no affect on load space, and scalable battery technology means other capacities can be included.

Read more about the Volkswagen e-Transporter 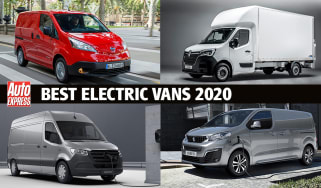