The new Nissan Micra is finally a competitor for the Fiesta and Polo, but it's a bit pricey in this spec 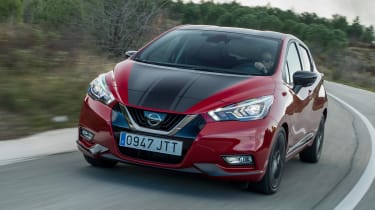 After years of dull cars using the Micra name, Nissan has finally built a genuine competitor for the Ford Fiesta and Volkswagen Polo. It’s good to drive, stylish and has a range of efficient engines. Build quality is good and it’s practical, too. This top-spec petrol looks a bit pricey, but in a cheaper trim the new Micra is now easily worth a look for any prospective supermini buyers.

The all-new Nissan Micra impressed us a lot when we drove it in prototype form late last year, but now we’ve finally driven a production car on the road - and it’s good news for potential buyers, as it’s grabbed us again.

With its sweeping roof and bold shoulder lines, sleek-looking lights and vibrant paint colours, the new Micra is unlike any of the previous Nissan superminis that’ve gone before it. This is a good looking, modern car aimed at younger buyers, with Nissan pitching it at what it calls ‘conquest’ customers - ones it wants to win over from other brands.

Rivals include the Ford Fiesta, Renault Clio and Volkswagen Polo – but instead of simply sitting in the same class like before, the Micra is now worth a long, hard look. The Micra can easily compete on looks, but it’s inside that impresses most. 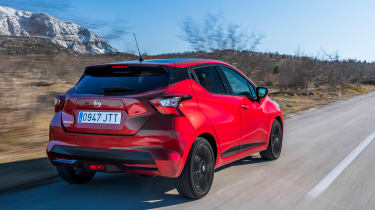 Our Tekna test car featured loads of soft-touch materials around the cabin, with the large section of dashboard and centre console in a customisable colour. There are some scratchy plastics lower down, but just like in the Polo it’s easy enough to ignore those while you’re driving. The seven-inch touchscreen isn’t the crispest display we’ve ever seen, but it doesn’t look cheap and adds to the upmarket feel inside.

The driving position is well thought-out, with lots of adjustment, a comfortable seat and decent forward visibility. Yet while the back has enough space for kids, the low roofline means taller passengers won’t be all that comfortable back there.

The ride felt smooth, but this test was on unblemished tarmac in Croatia. In the UK we suspect the Micra won’t feel quite so comfortable – as we discovered on our prototype test drive in 2016. We’ll have to wait a little longer to discover how this production model fares on pitted British roads. 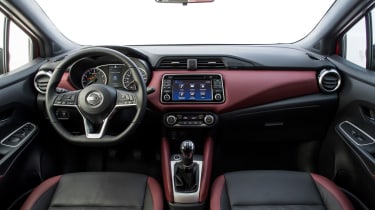 The Micra does improve through corners though, as the stiffer suspension set-up means it’s actually pretty good to drive. While the steering is too vague, it is weighted nicely - being light enough to be easy to drive in town, but no so light as to be distracting on faster roads. It feels composed in tight bends, and grip is good as well.

A system called Active Ride Control can govern engine torque and braking for you, which helps keep the car settled on the road. Active Trace Control can brake the wheels to tighten your cornering line when needed, too. Both are systems designed to be unnoticeable, and that’s exactly what they are - as we didn’t feel them interfering on our test route. 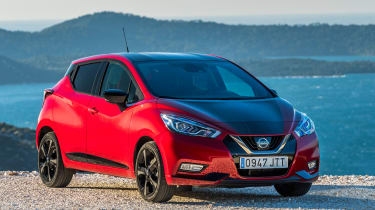 The 0.9-litre turbo petrol engine is pretty good too, and while it’s not as characterful as the best three-cylinder engines in the supermini class, it’s very quiet in the cabin. Vibrations are minimal and even at higher revs it’s pretty hushed inside. At a cruise it’s almost silent. It has 88bhp, and while that’s plenty to keep up with traffic it’s not as punchy as the 1.0-litre units in the Fiesta and Polo.

The five-speed manual is a good gearbox as well, with a smooth action - so even when you need to change down to stay in the power band it’s not too much of a hardship. With 17-inch wheels and stop-start, the petrol Micra returns 61.4mpg and 104g/km of CO2. There’s also a 1.5-litre diesel that manages over 80mpg in the right trim, though the petrol is probably better for the short distances that supermini driver frequently cover.

With 300 litres of space in the boot, the new Micra is a practical choice as well - there’s more space back there, but it’s also been designed to fit common items like suitcases more easily. That does mean that there’s a large loading lip, though, and the seats don’t fold completely flat. 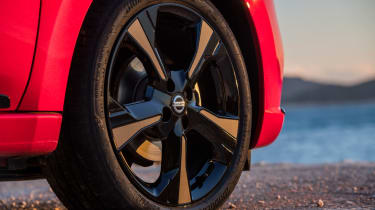 There’s lots of kit available – with lane-departure prevention, autonomous braking with pedestrian detection and Nissan’s Around View Monitor all standard. The latter really does help make driving in the city easier and for some buyers could prove invaluable. Our top-spec Tekna car also gets a rear-view camera, 17-inch alloys, a seven-inch touchscreen, two-tone upholstery and automatic air-con. There’s also a Bose speaker system that’s one of the better systems available in this class.

Nissan is also pushing personalisation with the new Micra, and so in the tradition of the MINI and Fiat 500 there’s also lots of colour combinations, contrasting bumper inserts and stickers available both inside and out.