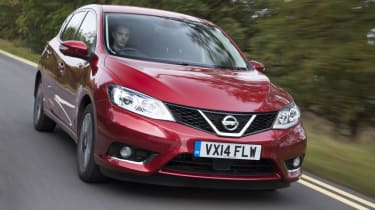 The most economical Pulsar is the 1.5 dCi diesel, which has claimed economy of 78.5mpg and ducks under the 100g/km of CO2 mark at 94g/km. It’s only available with a manual gearbox, however.

For an automatic shifter, you’ll need the 1.2 DIG-T petrol and its Xtronic CVT. It added around £1,350 to the Pulsar’s list price, and hurts efficiency, dropping the 1.2-litre engine’s claimed figures from 56.5mpg and 115g/km to 55.4mpg and 119g/km. The 1.2-litre petrol is also cheaper to buy outright than the diesel. 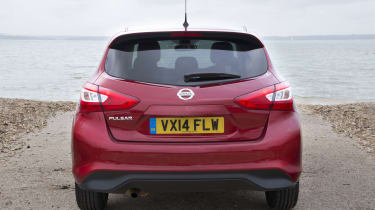 Insurance for the Pulsar ranges from group 10 for the 1.2-litre petrol, but only if you choose a spec level that includes Forward Emergency Braking – that means Acenta, n-tec or Tekna. The basic Visia doesn’t have this feature, and the insurance is bumped up a couple of groups to 12 as a result. It’s the same story across the engine range.

The Tekna spec DIG-T 190 has the highest group rating, at 18. In fact, opting for Tekna spec with any of the engine options bumps the rating up by one group. 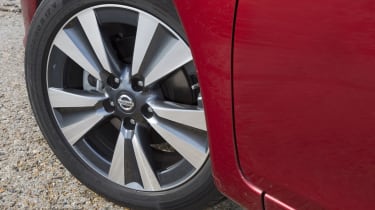 All in all the rates are competitive though, with the Pulsar undercutting the Volkswagen Golf by a couple of groups or more across the board.

The Pulsar offers a clear demonstration of the increased desirability of crossovers and SUVs when compared to hatchbacks. The five-door Pulsar is the hatchback equivalent of the Qashqai, as it uses the same platform, engines and technology as the SUV. However, depreciation is in the region of 34-40 per cent, which is some 8 per cent lower than it is for the Qashqai.

Depreciation relative to the Pulsar's hatchback rivals isn't so great, either. It's at the lower end of the market alongside the likes of the Peugeot 308 and Vauxhall Astra, and even behind cars like the Renault Megane and SEAT Leon.

The upside of this depreciation is that the Pulsar offers pretty good value for money on the second-hand market, and could be a decent purchase for anybody after a well equipped family car that doesn't desire the high-riding driving position or SUV looks of the Qashqai.