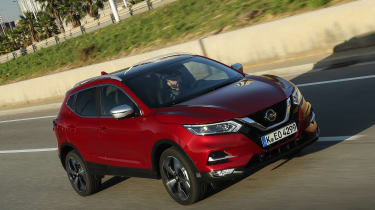 As ever, the Qashqai manages to get all of the sensible stuff right. Practical, well built and relaxing to drive, it’s everything a family car buyer could ask for. The infotainment system is massively improved, and the same goes for the new engines – even if the lower powered version renders the top spec version almost redundant. The dual-clutch gearbox means auto buyers will no longer need avoid the Qashqai because of a droney CVT, either. In short, the most popular car in the class has just got better.

As success stories go, there’s not much in the automotive world that has hit the spot quite so sweetly as the Nissan Qashqai. The winner of the Auto Express Car of the Last 30 Years is still going strong 11 years after first-generation car made its debut, with buyers loving its mix of space, affordability and SUV looks.

The current model came out in 2013, and today it ranks as the fourth most popular new car in the UK; only the Ford Fiesta, Volkswagen Golf and Vauxhall Corsa sell in bigger numbers.

Not content with what it’s got, Nissan keeps tweaking the formula to keep the Qashqai competitive. It reckons the latest changes will make it better to drive, cheaper to run and easier to live with every day. 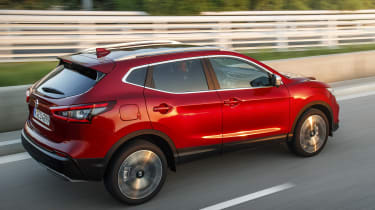 There’s a new infotainment system inside, but the biggest news comes under the bonnet. The previous 1.2 and 1.6-litre turbocharged petrols have been dropped in favour of a 1.3 turbo with a choice of two power outputs. It’s the same basic unit as you’ll find in a Mercedes A 200, and it’ll make its way into the Renault Kadjar in time, too. If you’d still prefer a diesel engine, then the recently updated 1.5-litre dCi unit is the only option currently, but a 1.7-litre with 148bhp will join the range next year.

Both are more efficient than the units they replace, and exhaust particulate filters help them to pass the latest stringent emissions testing procedures. Nissan says they’re cheaper to maintain too, as service intervals have jumped from 12,500 to 18,000 miles.

Drive is sent to the front wheels via a six-speed manual gearbox as standard. These are available to order now, while the seven-speed dual-clutch automatic driven here will be offered in November, at roughly £1,000 more than the higher-power manual. The auto is only available with the more potent engine, boosting torque to 270Nm in the process.

So what’s it like? Well on the move, it feels more than adequate enough for a car like this. The power feels smooth and linear and, though a little sluggish before the turbo kicks in, it feels no worse than the equivalent Volkswagen Tiguan in this area.

We gave this engine a bit of stick for sounding a little thrashy in the A-Class, but here it sounds sweeter, and it settles down nicely at a cruise. But perhaps you just can’t hear it because, as before, the huge, square door mirrors create plenty of wind noise at motorway speeds. 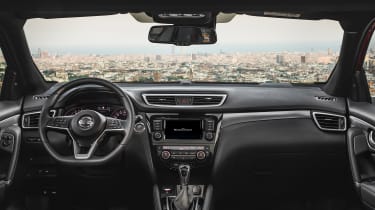 If there’s one issue with the high-powered model, it’s that the 138bhp car feels more than adequate in most situations, to the point that you won’t really notice any difference unless you’re carrying five passengers and a boot full of luggage. Unless you really need an auto, we’d save the £1,500 and spend it on a few choice extras.

Previously, auto buyers had to make do with a droney, noisy CVT auto; the new gearbox is much better. It shifts smoothly and it’s much more refined. It can be lethargic to move off, though – hence why it’s the best part of a second slower from 0-62mph than the manual.

Elsewhere, the Qashqai feels similar to drive. In other words, it’s not the sharpest car in its class, but ride comfort is up there with the best. The steering is precise and is light enough to make parking simple. 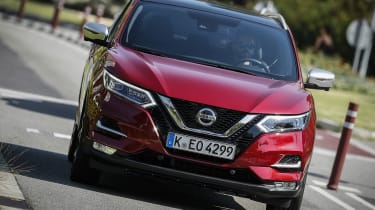 On the face of it, the interior is identical, too. The infotainment screen looks exactly the same, but the software is all new. While the old system felt like an eighties relic, the new set-up feels completely different. A quad-core processor results in fantastic loading times, and the capacitive screen reacts much quicker to the touch. It’ll now recognize pinch and swiping motions on the TomTom nav screen, too, and the home page can be customised with shortcuts and apps. Apple CarPlay and Android Auto are standard on all but the base model.

It’s still not perfect though: the seven-inch display is still too dark, and it’s impossible to read when the sun shines on it because the matt finish gives off a big, diffuse glare. Still, it’s a huge leap forward over the old setup.

Nissan predicts class-leading residuals for the Qashqai, with many models holding just over half of their value over a three-year period. This means that finance deals are competitive: a zero per cent PCP package on the 138bhp Acenta Premium means that, with a £5,693 deposit, you’ll pay just £149 per month on a 36-month deal.