New drop-top is one of the fastest yet, but the Porsche 911 Turbo Cabriolet's outright speed compromises the fun factor 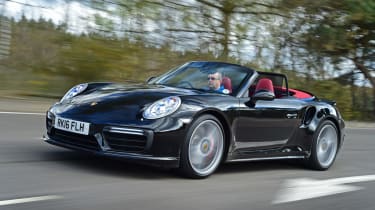 With a sizeable premium over the already fabulous drop-top 911 Carrera S, it’s hard to recommend the Turbo Cabriolet unless you’re blinded by the raw performance figures. Buy this car and you’ll certainly be getting one of the fastest open-top 911s ever. But you definitely won’t be buying the best. Having said that, it is astonishingly usable day-to-day considering the performance available.

The vast majority of the latest Porsche 911 range is now turbocharged – but that doesn’t mean there’s no longer room for extreme blown performance at the top of the line-up. Enter the latest 911 Turbo, driven here in Cabriolet form, which packs a mighty punch to deliver supercar acceleration alongside classic Porsche usability.

At least, that’s the theory. The numbers are pretty impressive; the Turbo’s revised 3.8-litre twin-turbocharged six-cylinder engine now produces 532bhp and 710Nm, enough to get from 0-62mph in just 3.1 seconds, and on to a top speed of 198mph.

The good but frankly unsurprising news is that the 911 Turbo Cabriolet is mind-bogglingly fast. It is hard to think of any car, let alone convertible, that would be as quick from point to point, thanks to the rapid-shifting seven-speed transmission, four-wheel drive and those enormous reserves of power and torque. It’s a surprisingly refined cruiser, too – particularly if you stick the adjustable dampers and powertrain into their ‘Normal’ modes to soften the ride and calm down the exhaust note. 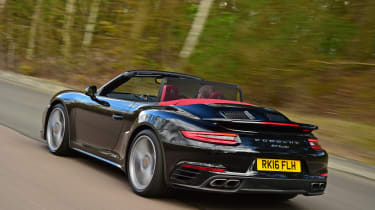 Porsche says it has introduced new technology to reduce turbo lag and sure enough, if you keep the revs spinning there simply isn’t much that could keep up with the Turbo Cabriolet. But if you’re in a higher gear – even third will do – and in manual mode, you’ll still notice a delay between stabbing the throttle and the trademark shove in the kidneys. It’s a bit like watching a boxer deliver a knockout punch, but in slow motion.

Where the Turbo really falls down is in character; it’s all about that adrenaline rush of acceleration – which is fine on a test track, but less useful on the public road. There’s none of the aural character that you get with even the turbocharged Carreras; with every last piece of the engine set-up totally devoted to performance, you get an assortment of whistles, chirps and whooshes that drown out six cylinders. 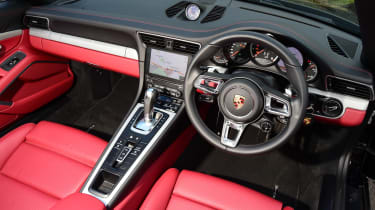 Yes, the roadholding from the four-wheel-drive chassis set-up is impressive – even more so if you flick the dampers into Sport mode – but it’s hard to play with a Turbo, because you need to be going so quickly to go sideways, the moment it does break loose, there’s little chance of getting it back.