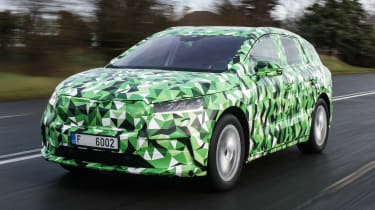 Skoda still has the thick end of nine months to perfect the Enyaq, but we already feel confident in saying that this model will open up the Czech brand to yet another appreciative audience. The electric motor installation feels extremely refined, the cabin configuration is clever and the onboard tech looks set to be at least the equal of anything offered in similar VW Group products. Assuming Skoda gets the price right - and it usually does - then the biggest problem will be a common one: supply and waiting lists.

Skoda is on a roll at the moment, with the excellent Scala grabbing family-car sales, the big-selling Kamiq shaking up the small SUV market and a new version of the firm’s volume flagships, the Octavia hatchback and estate, arriving in UK dealers this summer. But the Czech brand is about to take a huge leap into a new area of the market with its first bespoke electric car - the Enyaq. And Auto Express has had an early chance to drive the new arrival, as part of a prototype test taking place in Ireland.

As you might expect, the Enyaq slots into the wider VW Group plan for electric cars. Which is to say that it sits on the same underpinnings, called MEB, as the VW ID.3 and ID.4, and the forthcoming SEAT el-Born. This all-new platform has been designed purely with EVs in mind, so it features a trick floor that houses all of the battery cells and helps to maximise cabin space.

But why an SUV instead of, say, a five-door hatchback like the ID.3? There may be deeper VW Group politics at work here but the official line is that Skoda believes customers will be more willing to buy a car of the Enyaq’s likely price (somewhere around £35k, after the plug-in car grant) if it’s a large SUV over anything else. The firm also has a strong record in this area of the market, thanks to the jumbo Kodiaq, so this body style has been chosen to lead the EV assault.

The car will be the first MEB model produced outside of Germany, because it’ll be manufactured alongside other Skodas at the firm’s home plant in Mlada Bolelsav, Czech Republic. Production is slated to start at the end of the year, and the first UK deliveries should arrive by next spring. 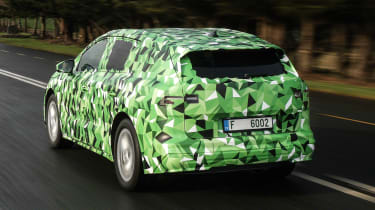 The Enyaq is 4,648mm long, 1,877mm wide and 1,618mm tall - so about 5cm shorter than a Kodiaq, and with a roofline that’s lower by about the same amount. But the new model has a wheelbase of 2,765mm, which is much closer to that of the biggest Skoda SUV - a sign of how the all-electric platform is designed to take advantage of the lack of a combustion engine at the front.

Indeed, as we stand beside lightly camouflaged Enyaqs in the Irish countryside, it’s immediately clear that the new model (which is, in effect, Skoda’s answer to the ID.4) will have a distinct look that sets it apart from its stablemates. Shortening the bonnet gives the profile a much more cab-forward stance - not coupe-like (yet, because a more style-focused version of this car is already in the pipeline), but visibly different from a conventionally powered vehicle.

Up front, the disguise seems more complex - a sign, perhaps, that Skoda is going to try to do something a bit more radical with the grille. We wonder if it won’t be illuminated in some way, as it was on the Vision E concept car.

Under the skin, the Enyaq will be offered with three battery sizes - a common trait in MEB products - and combinations with different motor configurations will expand the range further. The starting point, called the iV 50, will have a 55kWh battery (net 52kWh usable) and a rear-mounted electric motor with an output of 146bhp. It’ll offer around 211 miles of range under the tougher WLTP test cycle.

The middle battery size will be 62kWh (58kWh usable) and this version, badged iV 60, will get a more potent motor at the rear, with 177bhp and a range of 242 miles.

The biggest battery on offer will be 82kWh (77kWh net usable) and it will be available in a number of different variants. In iV 80 rear-drive form, it gets a 201bhp motor and the biggest range of any Enyaq, at up to 310 miles. But it will also be offered with a second front-mounted motor in two additional versions: the 80X, which has a total of 262bhp, and the vRS (yes, it will badged as such), which brings 302bhp for a 0-62mph time of 6.2 seconds. Both four-wheel-drive editions have a range of up to 286 miles. 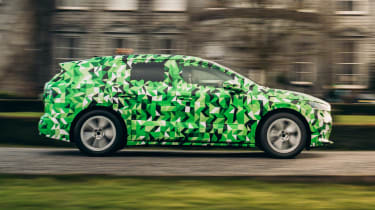 Three charging options will be available, incidentally. AC units will be able to replenish the battery in anything from six to eight hours - but for on-the-move refills, a DC set-up will allow 125kW charging, enough to take the level from 10 per cent to 80 per cent in 40 minutes.

The Enyaq will be offered with three different suspension set-ups - although this choice may yet be limited depending on which powertrain option you’ve gone for. As well as standard, there will be a Sports setting that’s stiffer as well 15mm lower at the front and 10mm lower at the rear. And Skoda’s usual DCC adaptive dampers will be available, in case you feel the need to adjust settings on the move.

The cabins of our prototypes are covered with various pieces of cloth - to the point where Skoda’s guards have ruled out all interior photography today. But as we climb aboard, it’s pretty easy to see how the company hopes to make this car stand out against the opposition (including the ID.4). For while the dashboard is hardly small, it is dominated nonetheless by a colossal infotainment screen.

The 13-inch unit is, Skoda’s engineers say proudly, the largest display that will be offered in any of these MEB products. It’s not exactly Tesla-esque in its scale, but it’s a hi-tech statement regardless - a reminder that even though Skoda is more commonly associated with space and practicality, its tech hub in Mlada Boleslav is actually at the heart of all VW Group infotainment development. An augmented-reality head-up display - one that ‘points’ down streets when giving navigation instructions - will also be available, although it’s not on any of the cars we’re trying today.

Our cars are iV 80 editions - so somewhere in the middle of the pack. And from the moment we pull away, it’s clear that the Enyaq has the potential to be another standout model for Skoda. There’s the initial jump of acceleration that comes with electric motors, belying the fact that this car must weigh the thick end of two tonnes. And this is the single-motor version, remember; we can easily see why Skoda says the most powerful variant will be able to tow up to 1,200kg.

The most impressive aspect is the relative shortage of noise. It’s being helped, of course, by the fact that this is a relatively long rear-wheel-drive car, so any characteristic electric whine is well behind us. But the motor and installation are clearly pretty effective too. And it’s already safe to say that this will be the most refined Skoda ever. 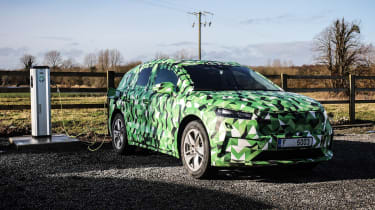 Rural Ireland’s roads mimick the UK’s, but with the potholes turned up to 11. The Enyaq displays pretty solid dynamics over it all, resisting body roll even on lumpy surfaces, but dialling out big imperfections with reasonable consistency. The steering is desperately inert and perhaps a little on the light side but we’re told the settings have yet to be fully signed-off - and in any case, the response to inputs feels quick enough for the sort of driving that this car will do.

We’ll be interested to see how Skoda makes a vRS version feel genuinely more sporting without sacrificing compliance in the name of body control, though, especially when an 80X will presumably have buckets of straightline shove.

We hitch a lift in the rear seats for a while, to see how the Enyaq will compare with the likes of the Kodiaq on passenger space. And the answer is very well indeed; it doesn’t feel quite so capacious as a Superb - although that may be as much down to the light-sapping disguise stickers on the windows than anything else. But six-footers will have no complaints on headroom, legroom or kneeroom.

Customer grumbles about boot space seem unlikely too; at 585 litres, there’s more space than in Skoda’s mid-sized SUV, the Karoq - and it’s a generous loadbay compared with most EVs we’ve experienced so far.

In addition, we’re told that there are 48 litres of oddment space in the cabin - again, as Skoda’s engineers have played around with the extra possibilities offered by the MEB packaging. Most of this capacity seems to be in a deep storage box between the front seats - again, a feature only possible because of the lack of a transmission tunnel.