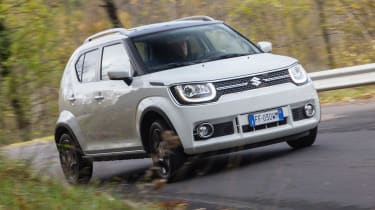 The Suzuki Ignis is a likeable and stylish little crossover no matter what spec, but we reckon removing four-wheel drive and hybrid assistance makes this 2WD 1.2-litre version the sweetest of the lot. Forget the on-paper performance and economy losses, and revel in the distinctive looks and the amount of space, equipment and fun you get for such a small outlay.

The Suzuki Ignis is a pint-sized crossover with funky ‘off-road’ styling and an upright stance that gives it much bigger road presence than a regular city car, although it’s barely any bigger.

Suzuki offers the boxy Ignis for sale with four-wheel drive, so it’s not all style with no substance. However, 4x4 is only available in the SHVS (which stands for ‘Smart Hybrid Vehicle by Suzuki’) version, which adds a lithium ion battery and an upgraded starter motor to assists progress when full power is called for. You can read about the 4x4 hybrid here, as this Ignis review is focused on the two-wheel drive version – predictably the biggest seller in the range. 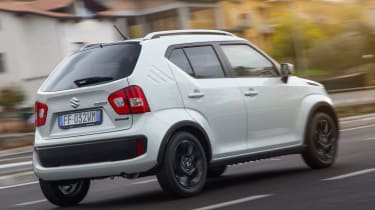 Although crossovers are one of the most happening sectors at the moment, the Suzuki Ignis has little competition if you’re looking for a truly compact contender. Most of its crossover rivals are a size up and several thousand pounds more expensive – think of the Ford EcoSport, the Renault Captur and the Peugeot 2008. The Fiat Panda is available as a 4x4 though, while the Renault Twingo and Smart ForFour are quirky-looking alternatives too.

The rear-wheel drive Ignis saves an impressive 65kg when compared to the 4x4, meaning it tips the scales at 855kg. Although it matches the SHVS 4x4 for power, the lighter weight doesn’t translate to a faster 0-62mph time. In fact, at 13.5 seconds the rear-driver is a couple of seconds slower on the benchmark sprint, although it’s a little faster flat-out.

What’s missing is a little bit of the hybrid’s low-down punch, but once you’ve got the engine revving the performance feels just as perky. You need to keep things on the boil when tackling hills and motorways, but for a small city car that’s par for the course.

We do still think it’s a shame that Suzuki couldn’t squeeze the excellent 1.0-litre Boosterjet turbo petrol under the bonnet to give it the legs on the new VW up! TSI. Fuel economy isn’t as good on paper as the hybrid, but we still managed over 50mpg in mixed driving.

Elsewhere, the Ignis is better in a couple of crucial ways in a more basic spec. Firstly, the handling and ride are a touch sweeter – the little Suzuki feels like it’s been set-up to be as light as possible, and the ride is a bit less busy as a result. It’s still quite crashy over the giant potholes found around rural Italy, but remind yourself how small and cheap the Ignis is and it’s acceptable enough. It also feels a fraction keener to turn in to a bend, adding to the nimble and agile feel. It doesn’t have better steering, however – the helm is still remote and has absolutely no feel.

Inside, there’s a major boon as the boot space improves from 204-litres to 260-litres with two less driven wheels. It’s a decent size, especially when you consider how much space the sliding and reclining rear seats can free-up. Suzuki has been really clever with the packaging of the Ignis, so it offers a Tardis-like interior. 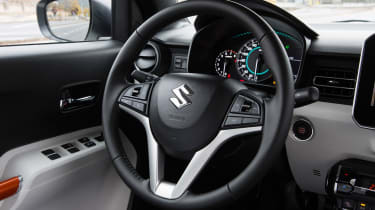 The materials are hard and scratchy, and you can spot some weight and cost-saving but the design is attractive and quality is okay. The European model we drove also featured Suzuki’s own sat-nav system rather than the fiddly Pioneer unit we tried on the 4X4 model, and the brand’s spokespeople told us models would come fitted with that when it hits showrooms in the UK.

The SZ5 model should be at least £1,000 cheaper with two-wheel drive and no hybrid system, yet it still comes with tonnes of kit including sat-nav, LED headlights, cruise and climate control and autonomous emergency braking. If you want to save even more money, the cheaper SZ-T model still comes very well-equipped.