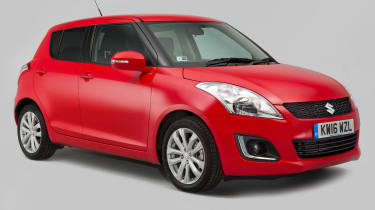 Although the original Swift arrived in the eighties, it wasn’t until 2005’s launch of the fifth generation that Suzuki's talented supermini really made an impact.

So when the time came to replace this car in 2010, it was no surprise that the brand played it safe by launching an evolution of this model rather than an all-new version.

It’s a tactic that worked as the current Swift has continued to be a success for Suzuki. And while it hasn’t notched up as many awards as some higher-profile rivals, that’s no reason to overlook it. Nearly six years after it hit showrooms, the Swift is still proving highly rated in our Driver Power satisfaction survey, so it must be good.

After being first launched back in 1985, the Suzuki Swift has been through many changes to date. It is now in its sixth generation, and it’s this, and the previous Swift Mk5, that we’re looking at here. 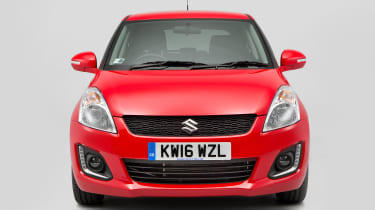 The Mk6 Swift arrived in September 2010, as a three or five-door hatchback. At first there was just a 1.2-litre petrol engine and SZ2, SZ3 and SZ4 trims, but a few months later a 1.3-litre diesel joined the range. Buyers of the petrol car could choose between a manual or automatic gearbox; the diesel came only as a manual.

The 1.6-litre Swift Sport arrived in January 2012 in three-door form; only from July 2013 was it offered as a five-door, too. At the same time a 4x4 model joined the range (in five-door form only) and a more efficient diesel was introduced (emitting 101g/km of CO2 instead of 109g/km). From June 2014 the SZ4 got standard sat-nav and the diesel was axed from the line-up.

Which should I buy one?

The diesel is muscular, efficient and surprisingly refined, but there aren’t that many available. You’ll probably end up with a 1.2-litre petrol car, as these are by far the most common. Also worth seeking out is the 1.6-litre Swift Sport, which is great fun. 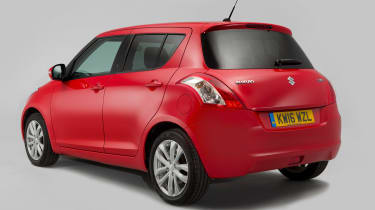 The automatic box is okay to use but nothing special, while 4x4 models are very rare and not worth seeking out unless you live somewhere really remote and prone to severe ice. All Swifts feature seven airbags, ESP, remote central locking, electric front windows, electrically adjustable and heated door mirrors plus a multifunction steering wheel. SZ3 adds air-con and 16-inch alloys, while SZ4 models also bring climate and cruise control, keyless start, automatic lights and privacy glass on five-door cars.

Alternatives to the Suzuki Swift Mk6

There’s no shortage of cars to consider in the supermini market. The Honda Jazz majors on practicality and reliability, while the Toyota Yaris is dependable, too. But the Suzuki’s main adversary is the Ford Fiesta, which is in plentiful supply and is great fun to drive. Vauxhall’s Corsa also offers a lot for the money as there are so many available.

Other alternatives include the Renault Clio and Peugeot 207 and 208, which are strong value and more practical than the Suzuki. The Skoda Fabia is a really easy car to live with, as is the Audi A1. You’ll need deep pockets to buy an A1, but it’s a fine small car that’s great to drive, with superb engines and class-leading build quality.

Make sure that the handbrake is adjusted to hold the car on a steep incline. They can go out of adjustment quite quickly, and may need tightening. 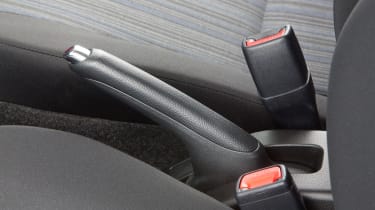 It’s more likely to be evident in low temperatures, but clutch judder can be an issue. This is usually down to a clutch plate that needs replacing.

Squeaks and rattles aren’t all that unusual. The normal culprits are the door trims and seatbelt mechanisms, as well as the lid for the Swift’s glovebox.

Some cars suffer a notchy gearchange. The Swift Sport is the model most likely to be affected. Changing the gearbox oil can make a difference.

While the design is bland and some of the plastics cheap, the Swift’s dash is simple to use and occupants up front will find it easy to get comfortable. But the rear is cramped and the boot is one of the smallest in the class at 211 litres, or 892 litres with the back seats folded (902 litres for the five-door). 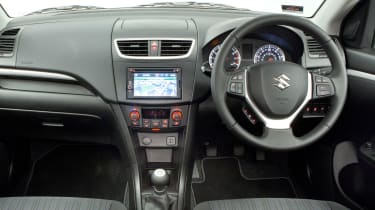 All Swifts need maintenance every 9,000 miles or 12 months, with a minor service followed by a major one (priced at £155 and £280 respectively). But Suzukis over three years old are eligible for cut-price maintenance, which reduces these costs to £129 and £259.

All engines are chain-driven, so no replacement timing belts are needed, but fresh brake fluid is required every 18,000 miles or two years, at £39. The coolant should be replaced every eight years or 96,000 miles (at £29), while it’s recommended that the air-con is serviced every two years (which means every other service); expect to pay around £49 to have the system regassed as required.

This generation of Swift has been recalled four times. The first, in May 2011, related to tyres fouling the bodywork on models with 17-inch wheels, but affected just two cars. 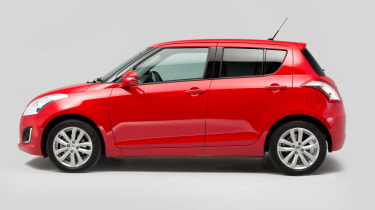 ESP issues with Swifts built in June and July 2011 led to a recall in January 2012, while brake fluid leaks forced cars built in February and March 2013 to be called back in April 2014. The most recent recall, in October 2014, affected Swifts produced from September to November 2013. Some could overheat because of the water pump working loose.

The Swift Mk6 made its Driver Power debut in 2013, finishing 81st. It ranked only 139th last year, although in 2016 it’s jumped back up to 58th, thanks to strong scores of sixth in the handling category, 21st for reliability, 26th for ease of driving and 28th for running costs. Practicality (143rd) and ride quality (98th) aren’t so good, though.

The Swift isn’t the most obvious supermini, but in some ways that counts in its favour. It’s unusual and most popular with private rather than fleet buyers, so most models are cherished and have covered low mileage. Reliability is proving a strong point, too, as are running costs, but this doesn’t come at the expense of driving fun as the Suzuki is also great dynamically. While the limited engine range will put off many buyers, the 1.2-litre petrol provides more zest than you might think, plus decent economy. Throw in great steering along with an accomplished chassis, and the Swift is a tempting choice.