Most economical vans and pick-up trucks 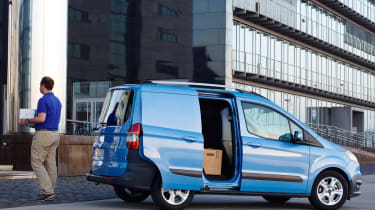 If you have a van to run - and especially if you're a fleet operator - then fuel economy will have an inescapable impact on your financial outgoings. With the price of diesel in the UK going up in recent months, these costs will have risen, so we've looked at the spec sheets and official figures to list the vans and pick-up trucks that deliver the best fuel economy.

Of course, the likelihood of being able to match these figures in the real world is entirely dependent on driving style, the payload on board, and even the weather (some stop-start equipped models won't operate as efficiently in cold weather, for example). But all of the combined fuel economy figures listed below are produced in a controlled environment, so they can be directly compared with each other to find the most economical vans on sale.

We've split these vans into six different categories: supermini-based vans, small vans, mid-sized panel vans, large panel vans, pick-up trucks and commercial SUVs. We've highlighted the most economical models in each category, and named the variants with the best and worst quoted MPG figures to give an idea of the range of economy figures available.

Of course if you pile on the extra kit, such as an extended wheelbase, 4WD, a ply lining, tonneau cover or high roof, then economy will be affected by the added weight of these options. The same goes for crew vans and passenger vans, as the extra weight of their additional seats and safety kit will have an adverse effect on economy, too.

If you really want to cut your costs, then the new breed of electric vans might be the way to go. Renault and Nissan are leading the charge for EVs, using similar technology in the Renault Kangoo ZE and Nissan e-NV200 respectively. Apart from the commercial version of the Mitsubishi Outlander PHEV, there aren't many hybrid or plug-in alternatives in this sector, although Ford is planning to produce a hybrid Transit by 2020.

In the meantime, the following vans are the most economical you can buy, so choose wisely and you'll be quids-in with the savings you make. 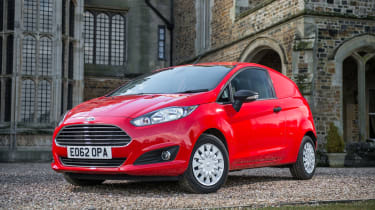 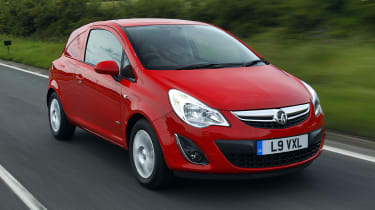 Ford and Vauxhall have the supermini-based van sector pretty much sewn up between them, so it's no surprise that these two are at the top of the economy tree. Ford added its 1.5 TDCi diesel to the Ford Fiesta van in 2015, and in ECOnetic trim this returns an excellent claimed MPG figure of 88.3mpg. The Vauxhall Corsavan matches this if you go for the 1.3 CDTi ecoFLEX fitted with Vauxhall's Easytronic auto, while the manual version manages 85.6mpg.

Where the Fiesta really holds an advantage is with the way it drives, as it's far more enjoyable than the ageing Corsa. The only other option in this sector is the even older Fiat Punto, and with a claimed return of 80.7mpg, it's still pretty frugal. 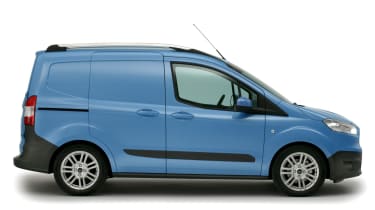 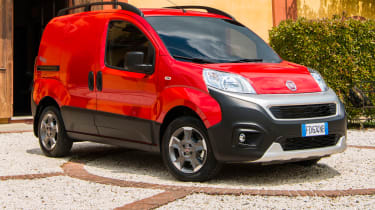 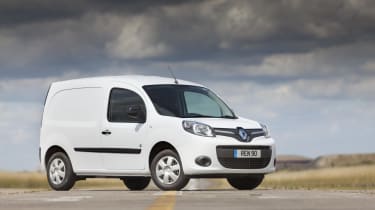 The smallest model in the Ford Transit range is also the most economical in this sector. The Transit Courier is capable of 76.3mpg with the latest 1.5 TDCi diesel fitted, while the Transit is one of the few vans offered with petrol power. While the EcoBoost turbo three-cylinder has claimed economy of 55mpg, real-world economy is likely to struggle to match that.

The Fiat Fiorino is related to the Peugeot Bipper and Citroen Nemo, but Fiat went its own way with engine development, and that means it's more economical than its French relatives - the best the French duo can manage is 64.2mpg. Of course, longer wheelbase and multi-seat versions of the Fiorino have poorer figures, but they're still north of 60mpg.

If an electric Kangoo ZE doesn't suit your needs, then the standard Kangoo offers plenty of appeal instead. With no model dipping below 55mpg combined, the whole range, including the long-wheelbase Kangoo Maxi, is pretty economical. Other models to consider in this sector are the aforementioned Bipper and Nemo, while the Volkswagen Caddy BlueMotion matches the Kangoo at 64.2mpg. BlueMotion Technology keeps economy in check on the rest of the range, although they're nowhere near our top-three here. 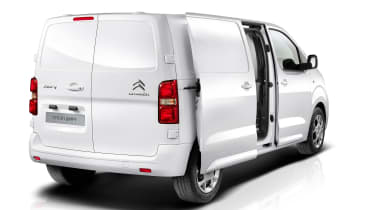 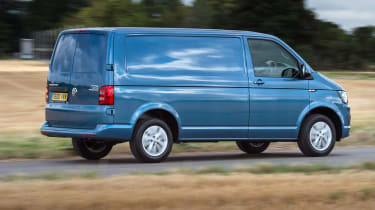 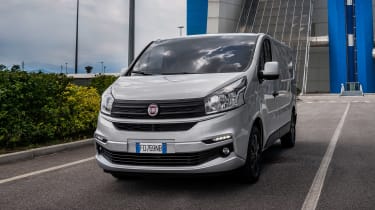 The new-for-2016 Citroen Dispatch and Peugeot Expert go straight to the top of the mid-sized van category for economy. Choose the shorter bodystyle, called XS in the Dispatch and Compact in the Expert, and the 1.6 BlueHDi 115 returns 55.4mpg when fitted with stop-start. However, even the standard and long-body versions of these two deliver great economy across the board.

The VW Transporter breaks the 50mpg mark in short-wheelbase BlueMotion guise, but as soon as you add anything, such as a longer wheelbase or 4MOTION 4WD, then economy takes a hit. That's the same story with the Fiat Talento/Renault Trafic/Vauxhall Vivaro trio, which all claim 47.9mpg. All three use the same 1.6 twin-turbo diesel, so while we've picked the best of the Talento range here, the Trafic and Vivaro deliver similar results. Another model to use this engine is the new Nissan NV300, which will also return similar economy.

Beyond these three, the Mercedes Vito comes close to matching the twin-turbo 1.6 in the Talento/Trafic/Vivaro trio, with a best economy figure of 47.1mpg for the 116 BlueTEC 2.1 Extra Long 7G-Tronic auto. The Ford Transit Custom is dropping behind the current class leaders these days, with an average of around 44mpg across the range. 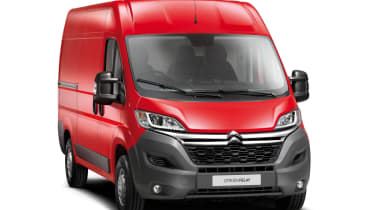 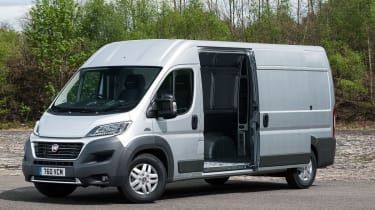 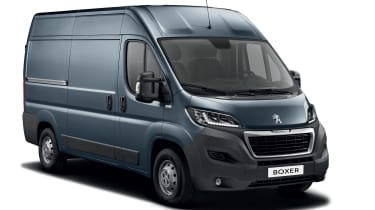 Citroen again leads the way in the large panel van sector, with stop-start boosting the Relay ahead of the similar Peugeot Boxer. A return of 48.7mpg is impressive for such a large van, although it'll be worth checking the maximum payload this engine can haul, as it might be compromised.

The Fiat Ducato does well thanks to its impressive 2.0-litre Multijet diesel, and is less than a mile per gallon behind the Relay. Beyond these three, the Ford Transit range has a range best of 43.5mpg for the ECOnetic version, but most are in the 35-40mpg range. The Renault Master/Vauxhall Movano/Nissan NV400 trio can't quite match their rivals, while adding rear-wheel drive spoils its efficiency, too. The Mercedes Sprinter is showing its age in the efficiency stakes, as no model in the range can do better than 40mpg. 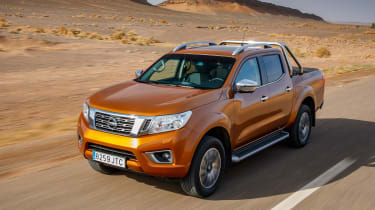 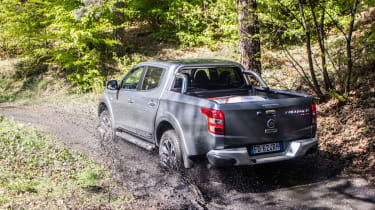 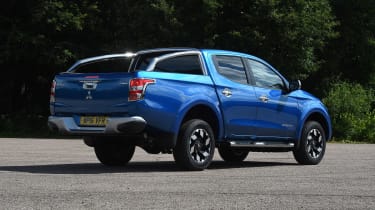 We've ranked three pick-ups, but essentially there are just two models here. The Navara takes the top spot courtesy of the 2WD version on offer, but as soon as you take that out of the equation, the Navara range is level-pegging with the L200 at 44.1mpg. The only spoiler for the Nissan is the addition of the auto gearbox, but then it edges ahead of the L200 again. The interloper in this Nissan/Mitsubishi battle is the Fiat Fullback, which is simply a rebadged L200. There are only three models in the range, with the lower powered 150 model being the most efficient, the larger 180 manual falling in the middle, and the 180 auto completing the line-up.

Elsewhere, the Ford Ranger is a pretty decent performer, with the 2.2 TDCi Double Cab managing 43.5mpg thanks to standard-fit stop-start. The only other model to break 40mpg is the 2WD standard cab, while adding an auto to the 2.2 drops it to 35mpg, and the big capacity Wildtrak auto only manages a claimed 31.7mpg.

The Toyota Hilux is an average performer, with figures from 41.5-38.0mpg, only just ahead of the older-tech Isuzu D-MAX and SsangYong Musso. The Volkswagen Amarok only manages 35.3mpg in 2.0 BiTDI 180 guise, but the new V6 diesel matches the lower powered 2.0 BiTDI 140 at 36.2mpg, whether you choose the 204PS or 224PS version. 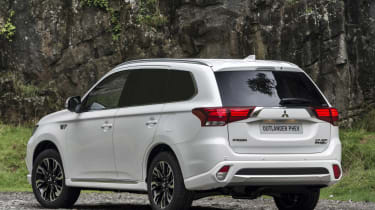 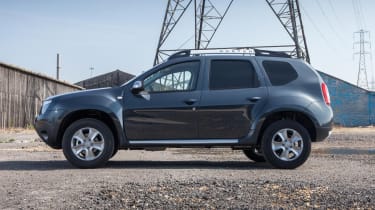 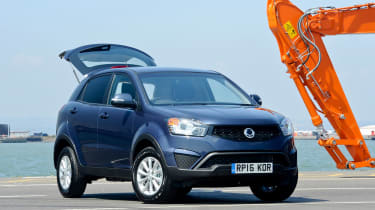 The Outlander scoops the prize in the commercial SUV sector for two reasons. Firstly, there isn't much competition, and secondly, Mitsubishi is the only firm that currently sells a plug-in hybrid CV. The Outlander PHEV 4WORK uses the same running gear as the standard SUV, so claimed economy is 148mpg, although real-world economy won't get near that unless you religiously plug the car in to charge at every opportunity. If you don't charge it, then economy will be poorer than the standard diesel Outlander, which has a claimed 53.3mpg figure.

The Dacia Duster Commercial is a newcomer to the class, and has the same rugged appeal as the standard five-seater. It claims over 55mpg even with four-wheel drive, which is well ahead of the similarly sized and priced SsangYong Korando. The only other commercial SUVs available are the Land Rover Discovery - production of which is winding down - and the Mitsubishi Shogun 4WORK. Neither of these large 4x4s has claimed economy over 37mpg, so while they'll be good for towing or carrying loads, they're not exactly economical.