Is the new Vauxhall Combo Life MPV as practical and well-focused as its PSA counterparts? We find out... 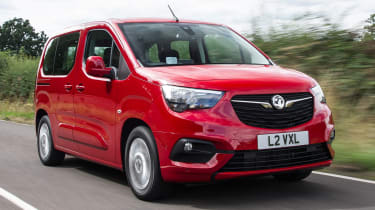 The Combo Life looks a well-judged proposition, slotting in neatly between the cracks left by the respective ranges of the Citroen Berlingo and Peugeot Rifter. It doesn't have the razor-sharp cost focus of the Citroen, but it could be appealing to those who want a slightly more upmarket finish without the pseudo-SUV traits that you get in the Rifter. As with both of those cars, the Combo Life can't quite shake off its van associations, however. Equally, there's no doubting that it's one of the most practical cars you can buy.

We’ve been pretty impressed so far with the new range of the PSA Peugeot-Citroen Group’s van-based MPVs - the Citroen Berlingo and the Peugeot Rifter. And now it's time to try the third model in the range: the Vauxhall Combo Life. This is the third car developed between the British brand and its owners PSA, and it's the first time in recent history that Vauxhall has offered such a functionality-focused MPV.

As such, Vauxhall wants the Combo Life to perform two roles. It believes the car can attract new customers to the brand ­– buyers who haven't felt properly served by its conventional MPV offerings up to now ­– as well as catering for existing Zafira Tourer owners looking to replace their car in due course. That car has already ceased production and will fade out of showrooms and dealer forecourts in the not too distant future.

Vauxhall will offer the Combo Life in two lengths, each with two possible seating configurations. There's the regular edition, with five or seven seats and between 597 litres and 2,126 litres of luggage room. But the longer-wheelbase model, called Combo Life XL, will also be available with up to 2,700 litres of boot space when the seats are folded. Again, five or seven-seat versions are on offer.

There's not quite so much flexibility on trim levels. Design (five-seater only) brings body-coloured bumpers, air conditioning, six-way adjustment on the driver's seat, cruise control, a DAB radio, electric (front) windows and central locking. This spec starts at £19,610 – or around £1,000 more than the cheapest Citroen Berlingo.

Switch up to Energy, as we're testing here, and you get a better finish on the dashboard, front and rear parking sensors, 16-inch alloy wheels, foglights, a touchscreen infotainment system, and automatic headlights and wipers. This spec is your only choice if you want seven seats, incidentally; choose that configuration and you'll find the three seats in the second row fold down individually instead of in a 60/40 split, and the third row is removable altogether.

Vauxhall will also sell you a Family Pack that includes a front passenger seat that folds flat, allowing items of up to 2.7 metres in length to be accommodated, even in the standard-wheelbase version. 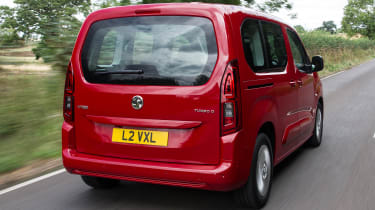 The engine line-up will look familiar to anyone who's glanced at the ranges of the sister cars from Peugeot and Citroen. Diesels are at the heart of it all, with a 1.5-litre unit producing either 99bhp and 250Nm or 128bhp and 300Nm. The more modest of those versions gets a five-speed gearbox; the higher-end unit comes with a six-speed manual but it can also be ordered with an eight-speed automatic.

The petrol option at launch is the PSA Group's PureTech 1.2 three-cylinder turbo, with 109bhp and a six-speed manual. But by this time next year there should also be a 128bhp version of the same engine, equipped with the eight-speed auto. As a guide, a petrol Energy five-seater will cost you £21,010 - slightly less than the comparable Berlingo, although the Citroen gets navigation as standard whereas Vauxhall charges £500 for the privilege.

Here we're testing the lower-powered diesel, which is also the cleanest Combo Life on sale, thanks to CO2 emissions of 111g/km and claimed economy of 67mpg. It's one of PSA's latest diesel motors and has enough shove to cope with the Combo Life's bulk – just. It pulls willingly from about 1,200rpm but you won't want to let it drop below that level. And while you can rev beyond 3,000rpm, the engine feels like it has done its best work well before that point. It's not particularly satisfying to jump between gears, either, thanks to a typically vague PSA linkage on the five-speed box. 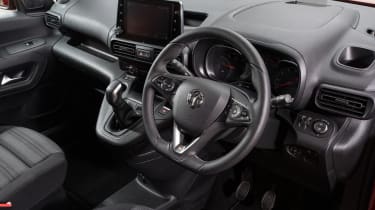 Even so, travelling three up, and with a modest amount of luggage, you're likely to think this motor perfectly adequate. It's relatively smooth when revved and drops down below the (substantial) wind noise when you're cruising on a motorway.

We also tried the 128bhp version and it felt much more comfortable. It’s strong enough for us to suggest you consider it if you're regularly going to load the Combo Life up to the gunnels – and let's face it, that is why you buy a car like this in the first place. We suspect that this motor, with the eight-speed auto, is the mechanical sweet spot of the range – much as it is in the Combo Life's sister vehicles.

The Vauxhall's handling is a curious mix, caused by its platform configuration. The front end is fundamentally the same EMP2 underpinnings that you get in the Peugeot 3008, but the rear is a bit more rudimentary, as suspension sophistication is sacrificed in the name of practicality and luggage space.

On the road this translates into a vehicle that steers with reasonable precision ­– indeed, the initial crispness of response may surprise you – but which succumbs to body roll if driven with much gusto. Still, the overall set-up is comfortable enough for cruising on British roads, with only bigger potholes thunking through to the cabin at lower speeds. We'd hesitate to call it nimble, but it is easy to position the car in narrower roads. Thanks, in part, to the large glass area and excellent visibility. 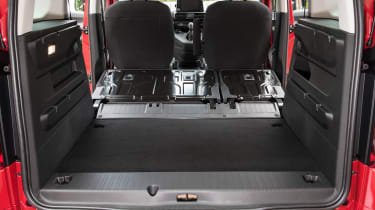 Inside, fit and finish feel a small notch above what you'd find in a basic Berlingo – a reflection, no doubt, of where Vauxhall is trying to pitch the Combo Life in the PSA MPV family. But it's not quite as slick inside as the Rifter and while there are plenty of useful touches, with deep door bins and plenty of oddment space around the facia, you may find yourself resorting to the add-on packs to get the neatest features. These include roof storage and the aeroplane locker-style trunk at the rear of the cabin.

Regardless of which bells and whistles you opt for, the space on offer is enormous, with bags of room for five grown-ups and the possibility to put three child seats across the second row, where all of the seats have ISOFIX points.

Vauxhall's version of the PSA infotainment system is little more than a reskin, meanwhile. We'd save the £500 that Vauxhall wants for including navigation and make do with the standard-fit Android and Apple connectivity, which allows you to use your phone for directions. It's a better system anyway.