Improved design inside and out, but infotainment system and in-car tach lag behind the best in class

As in so many other areas, the latest Corsa has taken a big leap design-wise over its predecessor – a car that was based heavily on a design and technology that first hit showrooms all the way back in 2006. Using the PSA group CMP platform – also used by the Peugeot 208 and 2008, among others – the new model is 19mm wider and 44mm lower than the previous Corsa, which makes it look more squat and sporty on the road. The design is nothing revolutionary, but it’s well proportioned and looks smart in the metal.

There’s a lively colour palette to choose from, too: alongside the predictable greys and silvers, the likes of Voltaic Blue and Power Orange offer buyers more eye-catching options. Some colours are available with a contrasting black roof and door mirrors, too. Bizarrely, you have to pay for all of the paint options, so at least £320 has to be added to the car’s list price regardless.

While some rivals get 17-inch and even 18-inch wheel designs, only the SRi Premium/Nav Premium, Elite Nav Premium and Ultimate Nav versions include 17-inch alloys - the rest of the range rides on 16-inch wheels. 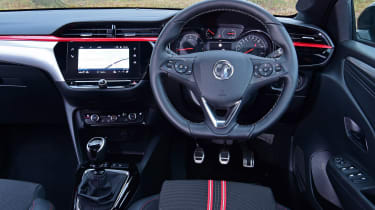 Step inside, and the Corsa’s tidy if unremarkable design theme continues. The dashboard is neatly laid out, with a familiar Vauxhall steering wheel sitting beside a new PSA-derived infotainment system. Unlike the Peugeot 208, however, the Corsa still sticks with physical controls for the air conditioning system, which will be a welcome decision for many buyers.

As standard, the Corsa gets a pair of large analogue dials with a small LCD screen between them, but top spec models get a full-digital readout. It’s bright and easy to read, but the square seven-inch display looks like an afterthought within the instrument binnacle.

Carrying over the infotainment setup from new parent group PSA comes with its pros and cons. For starters, the Corsa’s new touchscreen display looks great; whether it’s fitted with the 10-inch display used by top spec models or the 7-inch touchscreen that’s standard throughout the rest of the range, they both boast bright colours and clear graphics. Apple CarPlay and Android Auto are also standard, and there’s a smartphone cubby at the base of the dash which allows you to connect a smartphone via a USB port. 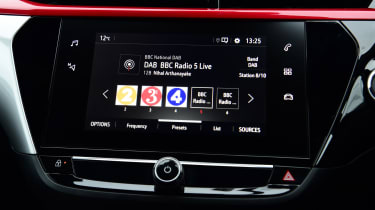 However, it’s not the easiest system to use. The menu layout isn’t as logical as the systems you’ll find in rivals from the Volkswagen or Hyundai groups, and overall it just seems a little fiddly to use. There are some physical controls – including the climate functions – to help with some options though, so the system is less of a pain than it is in the Peugeot 208. Elite Nav models also benefit from a panoramic reversing camera to make parking manoeuvres less stressful.