The Vauxhall Corsa looks the part, but falls behind rivals like the Ford Fiesta for dynamics and efficiency 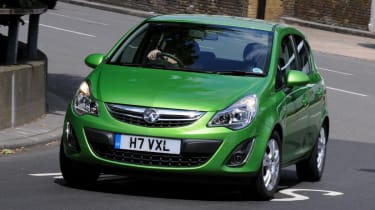 Launched back in 2006, the Corsa Mk3 was a huge hit for Vauxhall, and one of the best-selling cars in the UK. But a barrage of rivals such as the VW Polo, Renault Clio and Ford Fiesta left the aging Corsa trailing behind. The Corsa is a rather handsome car, with solid build quality and a generous amount of standard equipment. You’re well catered-for in the engine department: with the various petrol and diesel engines offered, there is sure to be one that suits your needs, whether it be efficiency, performance or refinement. However, the Corsa’s engine range is beginning to show its age, as the majority aren’t as punchy or efficient as those offered in rival models. At the top of the range sits the Corsa VXR, which uses a turbocharged 1.6-litre engine developing a mighty 192bhp. It produces the numbers but up against rivals such as the agile and inexpensive Ford Fiesta ST, the Corsa VXR can’t compete.

The Vauxhall Corsa really shows its age when it comes to driving as a result of its lifeless steering, slow responses and average front-end grip - it now feels a generation behind the Ford Fiesta and even the latest Suzuki Swift. 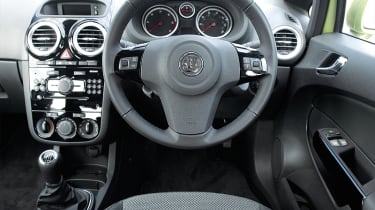 The petrol options found in the Vauxhall Corsa are a 64bhp 1.0-litre three-cylinder unit (available with Vauxhall's green ecoFLEX technology), an 84bhp 1.2-litre unit, and two 1.4-litre engines with either 98bhp or 118bhp. The 1.3-litre CDTi diesel can be gutless and loud, although the cleanest model emits just 88g/km of CO2 and returns 85.6mpg on a combined cycle. What's more, it’s available in ecoFLEX form.

The pick of the Vauxhall Corsa range is the smooth and flexible 128bhp 1.7-litre CDTi, although it's a shame it’s only available in the SRi. The VXR and VXR Clubsport are pretty punchy, and pack 189bhp and 202bhp respectively.

It's not all bad news, though, and the Vauxhall Corsa offers a comfortable driving position, light controls and compact dimensions, which ensure it’s a stress-free urban runabout.

Like most superminis, the Vauxhall Corsa is easy on the wallet to run - but not as cheap as its newer rivals. The most efficient engine is the three-door 1.3-litre CDTi diesel ecoFLEX with Stop/Start technology, which got an update at the end of 2012. It now returns 85.6mpg on a combined cycle, while emitting 88g/km of CO2.

Despite these impressive figures, they are bettered by the Ford Fiesta Econetic and Hyundai i20 Blue, which manage to emit just 87g/km and 84g/km respectively. Elsewhere in the mainstream Vauxhall Corsa range, even the least efficient model - the 1.4-litre petrol - is good for 50mpg and emissions of less than 130g/km. However, the VXR hot hatch model returns 38.7mpg and emits 172g/km of CO2.

Long 20,000-mile service intervals keep dealer visits to a minimum, and Vauxhall service costs are reasonable. Sadly, the Vauxhall Corsa is expensive. The entry-level Vauxhall Corsa Expression is sparsely equipped, and while the range-toppers are packed with equipment, they are pricey.

Even though the Vauxhall Corsa is getting on a bit in comparison to the Ford Fiesta and the Volkswagen Polo, it still looks reasonably fresh with its swept back headlamps, a rakish nose and neat detailing.

As a five door, the Vauxhall Corsa looks a bit square so we think it’s best as a three-door, thanks to a rakish roofline and steeply angled tailgate. Again, it doesn't have the head turning ability of the Ford or the class of the Volkswagen.

The Vauxhall Corsa is available in a whole host of trim levels, including the sporty SRi and SXi versions. What's more, the eco-friendly ecoFLEX engines also appear to be a popular choice among Vauxhall Corsa buyers.

If the Vauxhall Corsa VXR hot hatch isn't enough - an even more extreme VXR Clubsport is available with 202bhp (instead of the 192 found on the standard VXR). What’s more, it also gets a black gloss grille band, rear diffuser, extended front splitter and an exhaust from German tuning firm, Remus.

Vauxhall regularly introduces limited editions of the Corsa. We saw the sporty Corsa Black Edition at the end of 2012, as well as the good value Sting model.

Practicality is one of the Vauxhall Corsa's trump cards and it's one of the most spacious cars in the supermini class. Opening the tailgate reveals a usefully low loading lip and a competitive 285 litres of boot space. When the rear bench is folded flat, the capacity increases to 1,100 litres (or 1,050 in the three-door model).

A false boot floor provides extra flexibility, so it’s a shame it’s only available as an option on higher specification versions. As is the clever bicycle rack, that slides out from behind the rear number plate at the touch of a button. There is a decent amount of head and legroom for rear seat passengers, though, and the cabin is packed with useful storage.

The Vauxhall Corsa didn't feature in the 2014 Driver Power survey, but the previous year, it finished 126th in the 2013 Driver Power customer satisfaction survey, with an overall score of 82.52 per cent.

Vauxhall Corsa owners say it has many problems, but the biggest gripe seems to be with its lack of performance. It came 93rd in that category, while its other ratings are all fairly average, with the high point being 43rd in the running costs ranking. Once again, Vauxhall finished 13th as a brand in the 2013 Driver Power – just ahead of more expensive rivals BMW and Audi – which bodes well for the future.

Plus, as the Vauxhall Corsa has sold in such big numbers, most of the glitches and bugs have now been ironed out.

Although the Vauxhall Corsa is getting on now, it does have a five-star Euro NCAP crash test result. Most models get six airbags as standard, but curtain and side bags are only available as an option on entry-level Expression and S trims.

It is disappointing, though, that electronic stability control is only available as an expensive option on all versions of the Vauxhall Corsa as Volkswagen and Ford fit it to the Polo and Fiesta.