The Vauxhall Grandland X is a late arriving challenger to the Nissan Qashqai. What's it like in diesel guise? 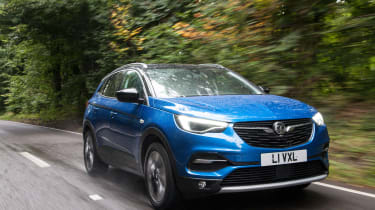 While its late arrival to market has given the competition a big head start, Vauxhall’s first true Nissan Qashqai rival is a solid offering. It’s decent (if not class-leading) to drive, comfortable, well-built, well-equipped and it’s impressively practical to boot. It’s subtly smart looks and upmarket cabin will suit those put off by the bolder designs in the class, but we just wish Vauxhall could have injected a little more character into the mix.

Vauxhall has played the waiting game with the new Grandland X.  While rival carmakers have been revelling in the booming mid-size SUV market, the Luton-based brand has had a Nissan Qashqai-shaped hole in its line-up for some time.  But that’s now changed, as first customer examples of the Grandland X are due to be delivered next month. We’re driving a UK spec car for the first time to see if it’s too little, too late.

There’s a good reason why Vauxhall’s family SUV is a little late to the party. Prior to PSA Peugeot Citroen’s purchase of Opel and Vauxhall earlier this year, the two carmakers had agreed to co-develop their SUVs in order to reduce costs and increase competitiveness. The Grandland X - the first Vauxhall to emerge since the PSA buyout– shares its platform and mechanicals with the Peugeot 3008 as a result.

We’ve already spent some time behind the wheel of Vauxhall’s mid-size SUV in the UK, but that was in a left-hand drive 1.2-litre petrol variant.  This is our first chance to try a right-hooker, only this time it’s powered by PSA’s 1.6-litre four-cylinder diesel. As a result of diesel’s recent bad press, Vauxhall estimates that only 30 per cent of buyers will shun petrol for the oil-burner. 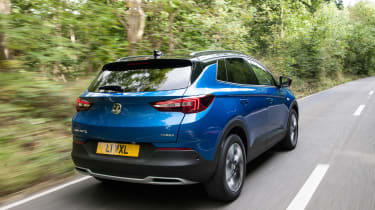 Those not put off by recent scaremongering will be well-served by the diesel, however. The 118bhp unit is one of the more refined offerings in this sector, staying subdued unless revved hard and producing a broad spread of power to ensure that you don’t need to do so. It’s flexible and happy to be driven about at very low revs, while a claimed combined economy figure of over 70mpg isn’t to be sniffed at. Despite all of that, the more characterful and slightly faster petrol would be our pick unless you’re looking to rack up lots of miles.

Whichever engine you choose, the Grandland X offers a composed, if unengaging, driving experience. Body roll is reasonably well contained and there’s plenty of grip, despite the lack of a four-wheel drive option (Vauxhall has instead opted to borrow PSA’s multi-setting traction control function, renamed Intelligrip here). The gearshift action is slick enough, too, but the steering’s directness is let down by a vague, light feel around the straight ahead. Rival SUVs such as the SEAT Ateca offer sharper handling, but the Vauxhall counters with a more pliant and comfortable ride – at least on our Sport Nav model’s 18-inch wheels.  Road noise seems well isolated, but wind noise was more intrusive than we’d like once up to motorway speeds.

Rather than simply looking and feeling like a 3008 clone, the Grandland X appeals to more conservative buyers put off by Peugeot’s bold styling direction. Like the Astra hatch, it’s a smart and cohesive design, but it lacks distinctiveness in a sector where it’s becoming increasingly difficult to stand out. 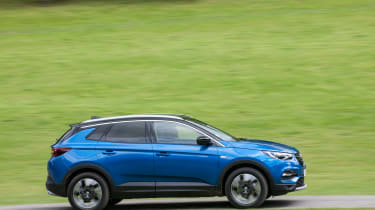 Similarly, the interior is more conventional than the more dramatic “i-Cockpit” found in the 3008, though we’ve no complaints about the logical layout or the quality of materials used. Some PSA influence is evident in the Grandland X’s infotainment system, but that doesn’t detract from its crisp resolution and relative ease of use.

One area where the Grandland X really does trouble the class best is practicality. There’s plenty of legroom and a decent amount of head room for rear seat passengers, while the 514-litre boot is among the larger and more usefully shaped load spaces in the sector. Fold the seats down using the easy pull levers in the boot and that capacity extends to 1,652-litres – a figure which rivals some larger seven-seat SUVs.

Equipment levels for our Sport Nav spec test car are decent, too, with sat-nav, Apple CarPlay and Android Auto, keyless go, autonomous emergency braking and Vauxhall’s OnStar system with a WiFi hotspot thrown in as standard.  The options packs are reasonably priced, although the Grandland X isn’t the cheapest outright offering in the class. Vauxhall assures us that its finance and PCP deals will be competitive, however.