With decent handling, comfort levels and build quality, the VW Amarok is a cut above its rivals 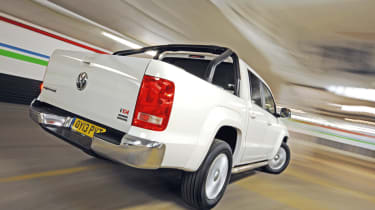 We loved the Volkswagen Amarok when it made its debut in 2011, and we still do – which is why it’s won its second Best Pick-up prize this year.

Why? Simple. It sets the standard in a class that’s now more competitive than ever. If you need a commercial vehicle for work, the Amarok’s combination of practicality and quality is compelling.

Its huge load bed will take a standard Euro pallet, and the cabin is free from the low-grade plastics and flimsy controls that blight many of its rivals.

Away from the building site, the Amarok also drives impressively. It has enough power to haul big loads, but maintains a smooth ride and  keen responses. For buyers looking at a double-cab pick-up as an alternative to an SUV, civilised surroundings and the prestige appeal of a VW badge make it the default purchase.

While most of the competition promise an unforgiving ride, the Amarok offers an unusual degree of comfort for this type of vehicle. It’s never going to rival a proper SUV for handling or ride quality, but it does a good impression of a traditional 4x4.

It even looks the part, so whether you need a rugged family runabout, or a dependable and uncomplaining work tool, we think the VW Amarok is the best pick-up around.

Our choice: 2.0 BiTDI 4MOTION Highline BlueMotion Tech (£29,802). Buyers wanting a versatile pick-up with all the upmarket car trimmings should go for a Highline-spec Amarok.

Practical, rugged and affordable, the Ranger also runs rings around its rivals when it comes to driver enjoyment. Sadly, its ride is uncompromisingly firm compared with the class leader, so it has to settle for a Commended award.

Price is critical at this end of the market, because these vehicles are, more often than not, a purchase driven by necessity rather  than desire. The Korando Sport has price  on its side, but it’s also practical, loaded  with kit and thoroughly decent to drive.