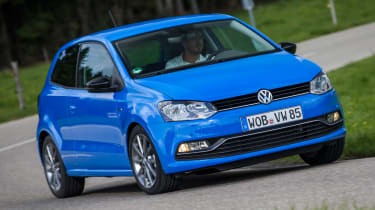 If you’re ruled by economy, this Volkswagen Polo 1.4 TDI diesel is worth considering. Its superb efficiency is backed by sufficient performance, although it’s louder than the cheaper three-cylinder petrol. The latter makes more sense unless you cover big miles. Either way, with more kit, superb quality and comfort plus smart looks, this updated model is a more convincing Polo overall.

We can forgive you for missing the styling changes to the new Volkswagen Polo, but believe us when we say that Volkswagen has undertaken some fairly substantial revisions to its supermini contender under the car’s familiar and neat bodywork.

Key to these changes is an extensively reworked line-up of engines, including a new 1.4 three-cylinder TDI turbodiesel that replaces the 1.2 and 1.6-litre TDI engines in the outgoing car.

VW admits that the three-cylinder 1.0-litre MPI petrol will by far the biggest UK seller, but while that engine was surprisingly smooth, the TDIs are the real fuel champions in the new line-up.

The 1.4 TDI comes with either 74bhp or 89bhp, and regardless of output it promises 83.1mpg economy while emitting a mere 88g/km of CO2. In order to achieve anything approaching those figures in the ‘old’ Polo, you’d have to have chosen the economy-focused BlueMotion model, which delivered 80.7mpg and 91g/km. 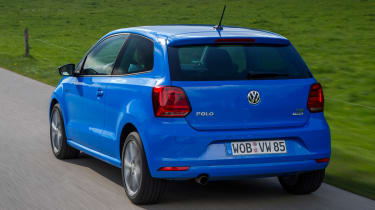 If you’re keen to avoid visiting petrol stations or paying road tax, the 1.4 TDI engines will clearly catch your eye. The 74bhp option betters the identically powered 1.0 MPI petrol by 24.2mpg and shaves 20g/km off its CO2 figure.

The £1,685 price difference between the SE petrol and diesel Polos might buy a lot of fuel, but the TDI changes the Polo’s character, too – mostly for the better. The three-cylinder TDI isn’t as smooth as the three-cylinder petrol, and engine sounds and vibrations are more obvious in the cabin.

This is only exacerbated by the fuel-saving stop-start; its stops and grumbly restarts underline the TDI’s more vocal character. Otherwise, the Polo is impeccably refined, with wind and road noise suppressed to a level that would have impressed in the luxury car market a few years back. 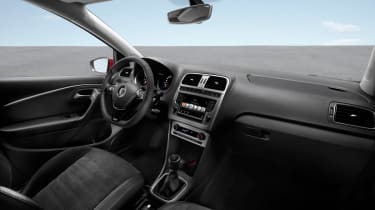 The big-car feel is enhanced by the TDI engine’s peak torque output of 210Nm between 1,500rpm and 2,000rpm. And as you don’t need to rev it to extract the performance, the Polo’s easier to drive – particularly on the motorway. The shift of the springy and vague five-speed manual box feels improved in the TDI, too, although it’s still not the slickest operator around.

Indeed, this latest Polo remains a competent, not remarkable, car to drive, and its focus on comfort rather than sharpness is obvious on the road.

The steering is well weighted, if a bit light on feel, while the suspension’s ability to soak up poor surfaces means a little more roll through bends than in a Fiesta. The driving experience will rarely thrill like the Ford, but the Polo shows a competence that’s difficult to criticise, while trading heavily on its prestige and solid build among its supermini rivals. 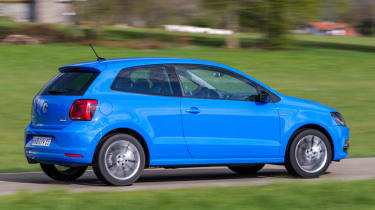 Every Polo also comes with more comprehensive equipment. The TDI is offered only in SE trim upwards, which means you gain the 6.5-inch version of VW’s colour, gesture-controlled touchscreen to use the enhanced infotainment system. It includes DAB radio and masses of connectivity to your smartphone via Bluetooth, USB, aux-in or SD card, while sat-nav can be added via the options list.

All models also now feature Hill Hold and an Automatic Post Collision Braking System, while big-car convenience and safety are boosted by an optional Driver Alert System plus Adaptive Cruise Control and City Emergency Braking for £500.