Some rivals are more funky to look at, but the cabin is smart and the in-car tech is class-leading 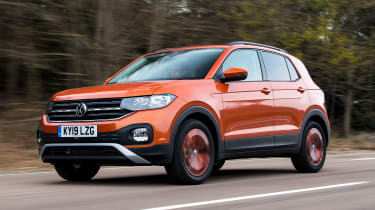 According to Volkswagen, the T-Cross is intended to sport a more funky design than the brand’s larger SUVs. There are elements inspired by the rest of the VW family - the side crease is reminiscent of the Polo, while the fog light surrounds mimic those of the T-Roc - while a full-width reflector around the back is designed to emphasise the car’s width. In a class that’s full of quirky, colourful and interesting designs, it’s arguably not the most eye-catching (though the optional Energetic Orange and Mekena Turquoise paints when paired with matching alloy wheel highlights certainly do their best to liven things up a bit) but it looks smart in a way that is sure to appeal to Volkswagen’s fan base.

Inside, the dashboard layout is almost identical to that of the Polo supermini. That means there’s a large infotainment display sitting above a pair of central air vents, simple, logical control layouts and an attractive steering wheel. As with the outside it’s possible to liven up the largely grey decor with some contrasting colour finishes. 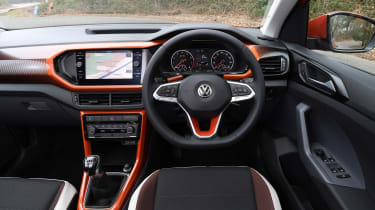 S and SE models come as standard with traditional analogue dials, while higher up the range it’s possible to add a 10.25-inch digital readout instead. This allows the driver to customise the information presented, choosing a regular looking speedometer and rev counter or prioritising trip or navigation readouts. The graphics are sharp, and while it isn’t completely essential, it does make the cabin feel more high-tech than those of many rivals.

Everything feels nicely screwed together inside the T-Cross, though there’s little in the way of soft touch plastics - the large expanse along the top of the dash is hard and scratchy, unlike the Polo where it’s made of a softer, rubberised material.

While the dash design is pretty much the same as the Polo’s, the driver gets a better view of the road ahead, thanks to a hip point located 100mm higher than in the supermini.

The similarities between the Polo and the T-Cross shouldn’t come as a surprise, as the pair share Volkswagen’s MQB A0 platform. The T-Cross is 54mm longer overall, but that’s still comfortably shorter than a Golf, so it’s an ideal size for city driving.

Every model in the T-Cross range comes with an eight-inch touchscreen as standard. In S and SE models, this includes Bluetooth and a DAB radio, but no built-in satellite navigation, which is a £725 option unless you stretch to an SEL or R line model. If you’re happy to make use of your smartphone, the SE cars and above have Apple CarPlay and Android Auto included.

The infotainment system itself is one of the best in its class to use. The graphics look clear and sharp, while the touch sensitive shortcut buttons which surround the display are big enough to not be distracting on the move. The two physical dials - one for volume, one to adjust the navigation zoom - are quite small and fiddly though.

Programming the navigation system is easy, thanks to a large on screen keyboard. Loading times are quick enough, and it’s possible to pinch and swipe on the display if you want to preview a route. The eight-inch screen also houses the reversing camera, which is a £260 option. 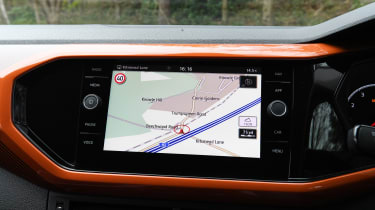 The R-Line also features a 10.25 inch Active Info Display as standard. It’s a £375 option on SE and SEL models, but as pretty as it is, it isn’t a must-have option.

The audio experience is the one area of the VW infotainment system that lets the side down. Sound quality from the standard speakers is nothing better than okay; the speakers lack clarity and punch. The optional Beats system, complete with a 300-watt output, fixes the latter, but doesn’t really add anything in terms of quality, so it isn’t worth the extra £430.