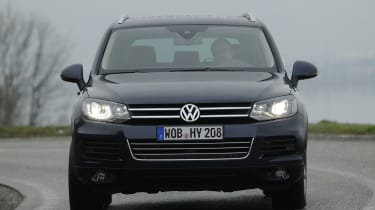 There's no doubt that the new Touareg ticks plenty of boxes. It's smartly styled, well built, spacious and good to drive. This Hybrid version doesn't want for performance and offers decent fuel economy too. However, it's likely to carry a significant price premium over the diesel version, which should prove even more frugal.

Here's the off-roader that puts the 'green' into the green laning! This is Volkswagen all-new Touareg, tested here in much-anticipated hybrid form for the first time.

The German firm has introduced a number of styling updates to its premium SUV. The Touareg has shed a few kilos and, with sharper lines and concave side panels, looks more muscular and focused. At the front end it features the same Volkswagen family 'face' as the Golf and Polo. The roof height is 17mm lower and helps to create the illusion that the new model is smaller than the outgoing version despite the fact it’s 41mm longer and 12mm wider.

Inside, the seven-inch colour touch-screen centre console draws the eye and is intuitive as well as a visually pleasing centrepiece. The leather and wood interior is luxurious and comfortable and the extended wheelbase gives the rear of the car a real sense of spaciousness.

The hybrid powertrain is a supercharged 3.3-litre TSI V6 petrol engine (from Audi's S4) coupled with a 46bhp electric motor – which produces 375bhp and 580Nm of torque. It will race from 0-62mph in 6.5 seconds, pretty nippy when you consider the Touareg weighs 2,240 kg.

As a 'parallel' hybrid it can run solely on electric at speeds of up to 31 mph and the petrol engine completely disconnects from the transmission while the vehicle is coasting to conserve fuel. Regenerative breaking and a Stop-Start system help the big off-roader achieve 34.4mpg combined and CO2 emissions of 193g/km.

To drive, the Touareg feels much smaller than its dimensions and this, combined with its commanding driving position and hot-hatch like acceleration, makes for impressive on-road performance. The electric motor is quiet and there’s little sign that it’s taken over when the engine disengages while coasting. The ride is extremely comfortable too. It all adds up to a likeable and capable SUV.