Volvo has jacked-up its S60 for a touch of off-road kudos but will anyone buy the resulting S60 Cross Country crossover saloon?

Is the four-door saloon crossover a niche too far? Volvo is hedging its bets, and predicts shifting just 100 units a year of the S60 Cross Country in the UK. In the metal, the pumped-up saloon car looks far better that it does in the pictures, and for some that could be enough to win them over. It rides better than the standard saloon, too, and excels at long-distance refinement. But despite its likeability, we’d go for the more versatile V60 Cross Country all-wheel drive version - its more practical body shape is more suited to the outdoor lifestyle its jacked-up stance promotes.

Coupe SUVs, four-door coupes, performance crossovers – there are plenty of niches these days, but Volvo has still managed to find another. Meet the S60 Cross Country – a saloon crossover that’s supposed to fuse all the luxuries of a conventional four-door with the rugged, go-anywhere appeal of Volvo’s off-road XC models. It’s true that the S60 Cross Country is the only saloon crossover on the market – but Volvo isn’t the first to pull this trick. American car firm AMC revealed its Eagle in the Seventies and Subaru had a strong reputation for four-wheel drive saloons with raised ground clearances with its US-only Legacy SUS in the Nineties. 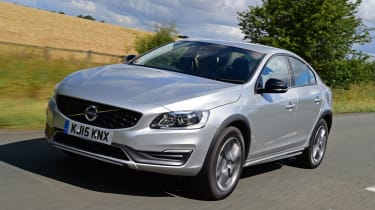 The S60 Cross Country sits 65mm higher than the regular saloon but there’s no trick suspension with configurable off-road modes – the Cross Country relies upon a taller springs and tough-looking bodywork jewellery, and that’s it. So there’s a new honeycomb grille pinched from the smaller V40 Cross Country, a lower front grille, silver-coloured scuff plate and dark grey trim which also incorporates the day-running lights. Along the sides there are plastic wheel-larch extensions and side scuff plates, and the window surround is finished in gloss black, as are the door mirrors. At the back there’s Cross Country branding on the bumper, a silver scuff plate and two-tone 18-inch alloys complete the makeover.

It might sound like a bit of a mish-mash, but Volvo has managed to pull it off – in fact, the more we looked at it, the more we liked it. Due to the S60’s sloping roofline, swoopy front and blunt back-end remaining untouched for this model, the Cross Country could be confused for a coupe SUV like the BMW X4 – but perhaps that’s just us. You won’t confuse the interior with anything other than a Volvo S60, though. Apart from the leather seats with contrasting copper stitching, it’s a carbon copy of the standard saloon, so there’s a well-made dashboard, button-heavy floating centre stack, super comfy seats, loads of steering wheel adjustment for the perfect driving position, and Volvo’s smart TFT instrument cluster. It also gets Volvo’s Sensus infotainment system, electric front seats and Volvo’s strong suit of safety kit including City Safe autonomous braking. Rear space is tighter compared to other premium saloons like the BMW 3 Series though, and the boot’s 380-litre capacity is 100 litres short of the BMW too. 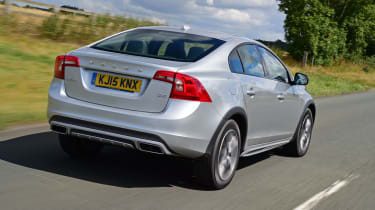 The S60 Cross Country can be ordered with all-wheel drive – opt for this and you’ll get Volvo’s throaty 188bhp five-cylinder 2.4-litre diesel under the bonnet and a six-speed auto box, but with CO2 emissions of 149g/km and combined fuel consumption of 49.6mpg it’ll be costly to run. We drove the front-wheel drive version that uses Volvo’s brand new 2.0-litre, four-cylinder diesel engine and a six-speed manual box, and with CO2 emissions of just 111g/km and 67.3mpg it’ll be far kinder to your pocket.

With the same 188bhp as the 2.4, the 2.0-litre gets from 0-60mph in 7.4 seconds, but it never feels that quick. You have to stir the six-speed box a lot to make decent progress, but the cabin is nicely isolated from engine noise. In fact, the insulation is just the start of the refined, cosseting driving experience - thanks to the extra ride height and 18-inch alloys wrapped in deep side-walled rubber, the ride quality is excellent – a welcome transformation from the slightly brittle standard S60. Turn into a corner and the S60’s well-weighted but ultimately numb steering remains, but surprisingly the jacked-up S60 doesn’t roll as much as you’d expect – body control is well checked. 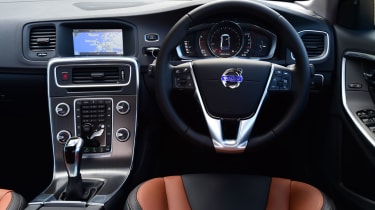 Key markets for the Cross Country are set to be India and South America where extra ground clearance is vital given the atrocious road surfaces. Volvo knows that the idea of a jacked-up saloon car doesn’t hold quite the same appeal in the UK, which is why it’s expecting to shift just 100 units a year over here. Most buyers are expected to spend an extra £1,300 for the more versatile estate version, the V60 Cross Country. That would be our choice too, but if standing out from the crowd is what you’re after, the S60 Cross Country is currently one of a kind.