The Volvo XC90 T6 features a four-cylinder petrol engine, which doesn't quite suit the car's character 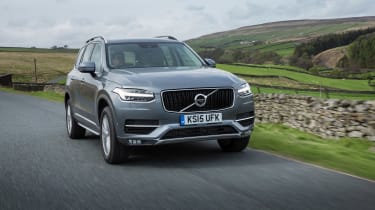 There are very few imperfections with the Volvo XC90, but the petrol engine is one of them. It doesn’t best suit the car’s relaxed and refined nature, which makes its presence a little more noticeable. Without it, the XC90 is worthy five-star car, but the petrol engine just the takes the shine of what is a perfectly polished product. Go for the diesel and you wont be disappointed.

The new Volvo XC90 recently toppled the Land Rover Discovery as the seven-seat SUV to have in our high-stakes twin-test, but can the newcomer continue to impress with a 2.0-litre four-cylinder petrol engine under the bonnet? This is our first test of the Volvo XC90 T6 on British roads.

Every all-new Volvo you’ll buy from a showroom from now on will only be available with a 2.0-litre four-cylinder engine - and this is the only pertol. A variation of turbocharging, supercharging and electrification is used to manipulate power output.

Here, the petrol version uses a combination of turbocharging and supercharging to produce 316bhp and 400Nm of torque. The engine produces some impressive looking figures - 0-62mph in 6.5 seconds and 143mph - but the XC90 never feels that quick. That’s not such a bad thing as it’s certainly fast enough, and Volvo’s primary focus centres around luxury and refinement rather than Porsche Cayenne-rivaling pace. 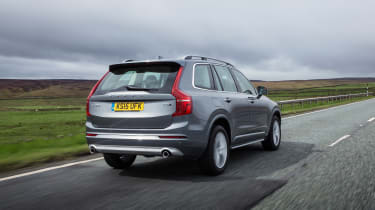 Every engine option – diesel, petrol or plug-in hybrid – comes paired with an eight-speed automatic gearbox and all-wheel drive. The T6 petrol fires silently into life and raises nothing more than a whisper at town speeds. Press on and the gearbox doesn’t kick down with the precision of the BMW X5’s ZF automatic gearbox, and it can feel a little hurried. It translates to slightly jerky gear changes at times.

It’s at speed, however, where the petrol engine begins to show its imperfections. The whisper soon turns into a gruff growl and becomes more intrusive and less pleasant as the revs edge towards the 5,700rpm redline. And because the petrol model is 70Nm down on torque over the D5 diesel, you simply have to hunt further up the rev range to extract the power.

In a 2,004kg SUV torque is critical, and the diesel is a much better character fit for the XC90 - it's not only more refined, but cheaper and more efficient too. Unsurprisingly, Volvo expects a mere 10 per cent of buyers will opt for the T6 petrol, with 75 and 15 per cent choosing the diesel and plug-in hybrid respectively.

Apart from the new petrol engine, it’s business as usual for the big Swedish SUV and that’s good news. On the road, the steering is light but is accurate enough, and while there is some body roll it’s not excessive considering its size. 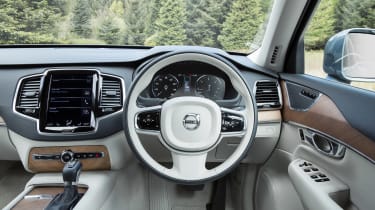 Four-corner air suspension is a £2,150 option, but we’d say it’s worth it. There’s nothing wrong with the standard steel spring setup but the air suspension irons out the most unforgiving of surfaces, floating across ground where steel springs send a shimmy through the cabin.

Those drivers who value a more exciting driving experience should still look towards the BMW X5, and for those who want a seven-seat SUV that can tackle off-road terrain, the Land Rover Discovery is still king. But the XC90 sits perfectly in the middle between these two and offers plenty of space and a comfortable, cosseting interior.

Speaking of the interior, passengers couldn’t ask for plusher surroundings. The cabin is modern, uncluttered and lavishly equipped, and our entry-level Momentum test car came with a 9-inch colour touchscreen with sophisticated nav, air conditioning with filtration system, hands-free power tailgate as well as vast array of on and off-road safety systems. The new infotainment system can be had with Apple CarPlay as a £300 option, but Volvo’s new system is so good there’s really no reason for it.