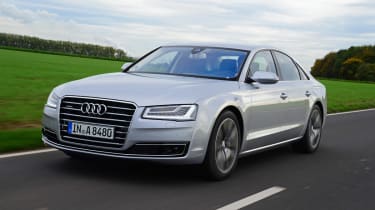 The updates to the way the Audi A8 looks are quite subtle, and so are the changes to the way it drives. It feels more refined and a little more comfortable than before, but its ride quality can’t match that of the latest Mercedes S-Class. The A8 remains near the top of the luxury segment, and with a starting price around £4,000 cheaper than the Mercedes, it remains good value but it’s still not good enough to compete with the best in a few key areas.

When Mercedes released the new S-Class, the Audi A8 started to look a bit outdated all of a sudden. But now Audi’s new luxury flagship is back, promising better engines, more technology and better comfort.

You’ll have to be a bit of an Audi specialist to spot the redesigned front end – which includes a newly creased bonnet and a fresh set of lights – or the new chrome strip and bumper design at the rear, but the A8 is now subtly refreshed and suitably modern.

For some, the fact that the headlights are the biggest talking point is proof that this facelifted car isn’t radical enough, but those lights are quite special. The MatrixBeam LED units are standard on all but SE and SE Executive models and they can track up to eight vehicles and pedestrians to help keep main beams on at all times while masking out small areas of light to avoid dazzling other road users. It also communicates to the sat-nav to set the lights up for junctions and corners ahead of time.

The engine line-up has been spruced up a little so most are now more powerful and more efficient. The 3.0 TDI V6 we’re driving here comes with quattro as standard and has seen power upped to 254bhp – an increase of 8bhp. It doesn’t sound like much but the 0-62mph time has been cut from 6.1 seconds to 5.9, making it quicker than the Mercedes S350 BlueTEC, the BMW 730d and the Porsche Panamera Diesel.

But while the amount of power on offer is part of the A8’s appeal, most people will buy it for its comfort, and it’s here that the facelifted model excels. The diesel engine now sounds far quieter and smoother than before – and the V8 diesel is better still. What’s more, excellent isolation of wind and road noise at speeds of well over 100mph make for truly serene autobahn journeys.

It’s a shame the ride can’t quite live up to that level of refinement, though. Small ruts and ridges that the new S-Class would just glide over send a noisy thud in to the cabin. By most standards it’s very good, but with rivals like the S-Class it’s just not good enough.

That hint of extra firmness could be down to the A8’s billing as a sporty luxury car, and the A8 does hide its size well through the bends. The new electro-mechanical steering is quick and responsive but no better than the old hydraulic set-up in terms of feedback.

It’s easy to forgive the A8 for its foibles, though, when you’re sitting in its fantastic cabin. It hasn’t been changed much for this new model but it really didn’t need to be. The materials, build quality and general feeling of luxury are all second to none, and new materials like matt woods just add to the sense of occasion.

So yes, the new A8 is a step forwards compared with its predecessor but what’s required to overtake the S-Class is more like a giant leap. The Audi gets close – and so do many others – but Mercedes still rules the luxury limousine class.