The new Audi SQ2 brings performance to a lower rung of the SUV market, but is it a hit? 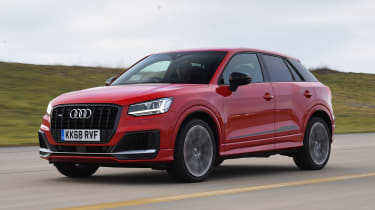 The Audi SQ2 can’t match the performance of an equivalent hot hatchback, but on the other hand it offers an image that a hot hatch can’t compete with – and one that modern buyers are craving. You pay a premium for this performance SUV, and you’ll probably want to add more pricey option packs. While the SQ2 isn’t the most practical of machines thanks to that smaller boot, it is a fast, tenacious hot SUV. And due to the price point, it’s opening up performance in a car such as this to many more buyers.

The performance SUV might be a niche within a niche, but the sector is expanding at quite a rate. While cars such as the Lamborghini Urus and Porsche Cayenne Turbo prove there’s a market for high-riding, practical and pokey off-roaders, if your budget is a little less extravagant then your choice has been far more limited – until now.

The £36,490 Audi SQ2 is one of very few more (relatively) affordable but still sporty compact SUVs. It has a 296bhp 2.0-litre four-cylinder petrol turbo that sends power to all four wheels through a seven-speed dual-clutch box. The familiar VW Group turbo powertrain is allied to a familiar chassis.

Those MQB underpinnings mean the SQ2 drives rather predictably – but that’s not necessarily a bad thing. You can jump into this car and get to grips with it quickly, pushing it hard to exploit the performance. 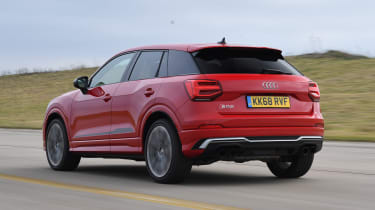 And there’s plenty of that, no matter what the conditions. With quattro traction off the line, it’ll sprint from 0-62mph in 4.8 seconds and charge on to 155mph.

You can feel a deep reserve of power, too – especially in Dynamic mode, which alters the throttle map to give more of the engine’s performance earlier in the accelerator’s travel. This means the SQ2 romps out of roundabouts, putting its motive force to the road with little fuss.

Up to 100 per cent of the engine’s torque can be targeted towards the rear axle, claims Audi, but in reality the car never feels that playful. Effective and ruthlessly efficient, yes, but not so spirited. The delivery is very linear, helped by the 400Nm of torque available from 2,000rpm. This might mean the SQ2’s personality is a little flat, but the level of flexibility, and therefore the pace at which you can cover tricky terrain, remains strong.

Those S-model trademark quad exhausts emit an enhanced yet subtle rumble when lifting off. This adds a bit more character, but the SQ2 is still not the most driver-focused choice. The steering is light and, because you’re sat high up from the road, you don’t get the same kind of connection as you do with a similarly powerful hot hatch. However, its accuracy and precision mean you can lean on the chassis and bully the platform into giving over its grip. It’s effective more than entertaining, yet the level of security is reassuring, so there’s no drama in exploiting what’s on offer.

Despite riding on optional 19-inch alloys, the SQ2 is relatively supple. This creates more roll in corners than you might like, but for the way most owners will drive the car day-to-day, the level of comfort given the performance is a welcome balance. 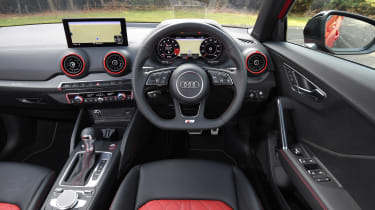 The chassis is upset by big bumps, and can be persuaded away from your chosen line on an uneven road. However, the trade-off between compliance and control is well judged for such a high, small but sporty car.

Of course, any SUV – performance focused or otherwise – has to be practical. With a 355-litre boot and enough space for four, the SQ2 just about delivers enough flexibility for mundane tasks. The Q2’s basic proportions mean rear legroom is more cramped than in, say, the Cupra Ateca, but it’s acceptable. Quality is a little more questionable, though. The many S-model upgrades, including sports seats, plenty of soft materials where you touch them most and other interior trim, do feel up to Audi’s usual standards. However, in a bid to maximise margins, there are some harsh plastics on the dash, which jars with the price tag.

The infotainment goes some way to justifying that figure, though, because sat-nav, Apple CarPlay and Android Auto are all standard. And, of course, Audi’s interface works with the slick simplicity we expect.