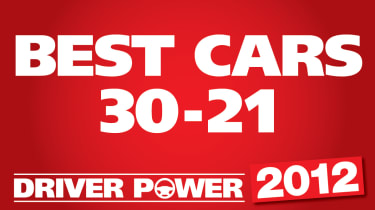 When Land Rover revealed plans to produce a smaller, cheaper, sportier Range Rover, enthusiasts were aghast. Fast-forward to 2012, and we now have an even lower-priced model in the form of the Evoque. The Range Rover Sport has made a decent debut on the Driver Power chart in 30th place, only held back by two categories. A poor 78th place in the reliability section is unacceptable for an upmarket 4x4, while the model’s significant thirst for fuel saw it placed 96th for running costs.

This result will raise a few eyebrows. The first and second-generation Honda Jazz have always performed well in Driver Power – but not this year. The MkII supermini fails to make the top quarter of the chart and appears to have lost its edge in the eyes of its owners. Performance is not up to scratch, the suspension has never been supple enough and handling isn’t in line with drivers’ expectations – so Honda has a lot to think about. At least there’s no question over the model’s superb reliability.

The last time the second-generation Toyota RAV4 featured in the chart, in 2009, it was an excellent 10th. Three years on, with an all-new model in the showroom, 28th is the best the MkII can manage. Excellent build quality and reliability remain at the core of this compact SUV’s package, but running costs have risen to unacceptable levels. Without the latest engine technology under the bonnet, rising prices at the pumps have pushed costs over the edge for some RAV4 drivers.

All the appeal of a Golf with the versatility and confidence of an SUV – that’s the idea behind the Tiguan, which has been a popular feature of the VW range since 2008. A decent Driver Power debut in 27th is the result of a consistent performance in all categories. Only for build and reliability does the Tiguan drop into the bottom half of any chart, but it doesn’t excel in any one category, either. A recent facelift could give the car the ammunition to attack the top 20 in 2013.

Even Land Rover’s 4x4 transmission will struggle to cope with the steep climb back up the chart required by the Freelander 2. The car has tumbled 10 places in the Driver Power Top 100, but if you take financial considerations out of the equation, its score would look very different. Even though the Freelander 2 is one of the most frugal models in Land Rover’s range, 94th place for running costs shows buyers are still hit hard in the pocket. The rewards are a smooth ride, comfortable cabin and stress-free drive.

The Mazda 6 has edged back into the top 25 after an improvement of five places. There’s no doubting the big family car’s practicality, with the five-door hatch and even more versatile estate offering loads of interior space. Perhaps more impressive is the 6’s 23rd place in our new technology chart and 16th position for performance. Mazda really does appear to have cornered the market when it comes to building practical, affordable cars that exceed the expectations of drivers.

It's down, but the S-MAX is far from out – owners tell us it’s the year’s best MPV. At the heart of the people carrier’s appeal is the way it drives. For a seven-seater to post top-10 finishes in the ride and handling charts is a fantastic achievement. Add a brilliant seventh place in the practicality rank and you begin to see why the S-MAX is such a hit. It’s not perfect, though. A poor 77th in the reliability and build ranking is bad enough, but 85th for costs explains why it’s not higher overall.

Congratulations to Toyota’s designers – they’ve come up with a city car that ticks boxes for the UK’s motorists. The iQ has proven frugal enough to grab a coveted podium position in the running costs category, while its tiny size, accurate steering and sharp gearchange have also led to a fine sixth position for ease of driving. Plus, drivers have clearly been impressed by the Toyota’s body control and cornering ability – they placed the tiny two-door in 19th position in the handling category.

While it has retained its predecessor’s name, there’s not a lot else about the latest Kia Sportage that will look familiar to drivers of the frumpy old-shape version. With a sleek new look and a big step up in quality, Kia’s latest compact SUV gets a glowing report from some very satisfied owners. A fine 16th place in the reliability and build ranking is better than many premium-badged rivals have achieved, while seventh position for technology shows that this Kia is fitted with everything drivers hoped for.

With memories of last year’s sixth place still fresh, Vauxhall will be disappointed to see the Insignia slip to 21st overall. However, the sleek family model has still put in a strong performance, with top-half finishes in every category except for ease of driving. Confidence-inspiring brakes and good reliability and build quality are the Insignia’s strongest suits, ensuring it avoids the stigma attached to its Vectra predecessor. A reduction in servicing prices could be required to improve on 49th place for running costs.