Fastest SUVs in the world 2020 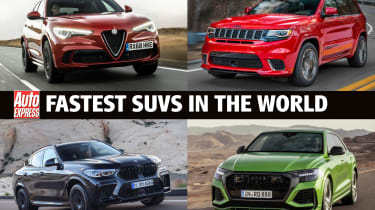 With their tall shapes and weighty 4x4 mechanicals, SUVs aren’t usually considered well suited to the job of going fast, so you might expect that even the quickest would have modest performance figures. Car manufacturers, of course, have other ideas and in recent years they’ve been hard at work building a succession of performance SUVs that possess blistering pace to humble sports cars and supercars.

Anti-aerodynamic design and general all-round bulk, the average SUV is in a constant war against the laws of physics. What these top performance SUVs show is that a portly kerb weight and garden shed aero are no obstacle to some serious hustle, if enough raw power is applied. Just don’t mention the fuel economy or price tag.

SUVs are more popular than ever and almost every high-end manufacturer is offering a performance version of their SUV creations. Bentley’s Bentayga, the Lamborghini Urus, the electric Tesla Model X and the Porsche Cayenne Turbo mean there are a lot of choices out there. Then you've got newcomers like Aston Martin and Ferrari joining in, meaning the fastest SUV today may not be the fastest SUV tomorrow.

Below we’ve ranked the top 10 fastest SUVs on sale in reverse order according to their official 0-62mph acceleration time. This works out as a better measure of pace as top speeds tend to be limited and acceleration has more relevance to the real-world driving that owners of these cars might do. 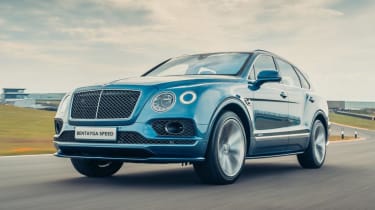 The regular W12 Bentayga isn’t exactly slow, but Bentley saw fit to give it an extra 30bhp and turn it into the ‘fastest SUV in the world’. With a 3.9 second 0-62mph time, there are faster accelerating SUVs but no other SUV can match the Bentayga Speed’s 190mph top speed.

All this performance comes at a premium however, the Speed is £40,000 more than a regular Bentayga V8 although in the world of top trump SUVs, this is the Bentayga to have. 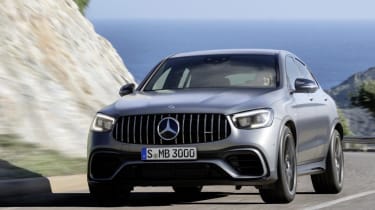 The importance of SUVs for luxury brands is well documented but in Mercedes’ case the SUVs have become a core part of its line-up.

Whatever you think of the coupe-SUV design, there’s no arguing about the GLC 63 S’ deeply impressive performance. A 503bhp twin-turbo 4.0-litre V8 and 4MATIC four-wheel drive system help launch the GLC 63 S from 0-62mph in 3.8 seconds and on to a top speed of 174mph. 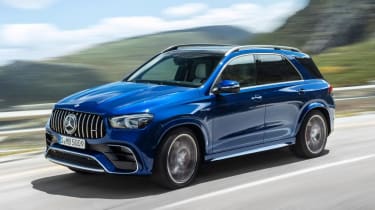 Despite being bigger than the GLC, the GLE 63 S matches it for acceleration and top speed. That’s perhaps less surprising when you factor in the GLE 63 S has 100bhp more at 603bhp.

A twin-turbo 4.0-litre V8 sends power to all four wheels via a nine-speed automatic gearbox and there’s also a mild-hybrid system providing an extra 22bhp and cylinder deactivation technology - although you’ll still only return 24.5mpg on the combined cycle. 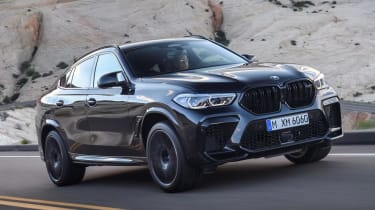 Both the original X5 and X6 were pioneers in their own right. While the X5 showed BMW could make an SUV with surprisingly car-like handling, the X6 previewed the rise of coupe-SUVs.

Since then, BMW’s M division has tinkered with both and the current versions are among the fastest SUVs in the world. Competition badged models have the twin-turbocharged 4.4-litre V8 from the M8 Competition producing 616bhp. The 0-62mph times stand at 3.8 seconds and if you opt for the M Driver’s Package the 155mph speed limiter is lifted and you’ll roar onto 180mph. 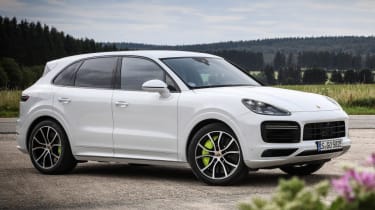 This Porsche Cayenne might be a hybrid but don’t let that fool you into thinking this is some eco-minded city runabout. A 542bhp turbocharged 4.0-litre V8 and 134bhp of electric motor never quite produce peak power simultaneously so the Turbo S E-Hybrid’s maximum output stands at 671bhp.

Fit the Chrono Sports Package and you’ll see 62mph from standstill in just 3.8 seconds and an eventual 183mph top speed. To put that into perspective, the new 718 Cayman GT4’s 0-62mph is a comparatively sluggish 4.4 seconds. 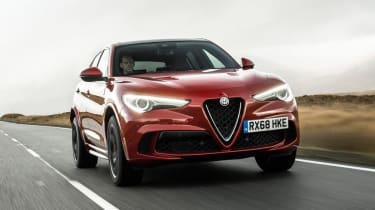 The Alfa Romeo Stelvio Quadrifoglio is the cheapest SUV in this list but you won’t be left feeling short-changed when it comes to the italian SUV’s performance.

A 2.9-litre twin-turbocharged V6 petrol producing 503bhp wouldn’t feel out of place in a Ferrari and can launch this 1,830kg SUV from 0-62mph in well under four seconds. 100 per cent of the engine’s power is sent to the rear wheels during normal driving with up to 50 per cent going to the front axle when slip is detected, further the Stelvio Quadrifoglio’s sporting credentials. 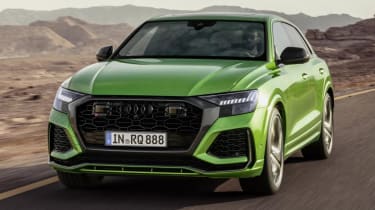 Featuring the same twin-turbocharged 4.0-litre V8 petrol mild-hybrid found in the RS 7 Sportback, the RS Q8 has a total power output of 592bhp and a whopping 800Nm of torque.

That’s enough to get this hefty SUV from 0-62mph in 3.8 seconds and on to a top speed of 189mph - so long as you spec Audi’s optional dynamic plus package, which bypasses the 155mph speed limiter. 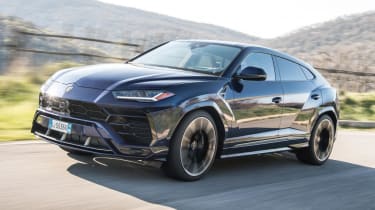 Even in this list of ostentatious SUVs, the Urus manages to stand out in true Lamborghini fashion. Yes, prices start from £132,000 which seems like relatively good value for a practical Lamborghini with supercar-baiting performance and genuine off-road capability, but you’ll be rocketing towards £200,000 with a few option boxes ticked.

A twin-turbo V8 nicked from the Porsche Cayenne Turbo has been tuned to a stonking 641bhp. Select the sportier drive modes and you’ll be intoxicated by the noises coming out of the exhaust as you roar from 0-62mph in a scarcely believable 3.6 seconds. 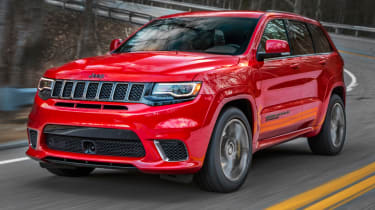 The Jeep Grand Cherokee Trackhawk might not have the brand appeal of some of the other cars in this list, but it more than makes up for it with 707bhp and 881Nm of torque on tap. The engine comes out of a Dodge Challenger Hellcat and it’s a raucous 6.2-litre supercharged HEMI V8. The soundtrack is sensational, so don’t be surprised to see your fuel economy drop with every pull.

Despite having to haul around 2.4 tonnes, the Trackhawk manages to get from 0-62mph in just 3.4 seconds - that’s 1.4 seconds quicker than a V8-engined Ford Mustang. 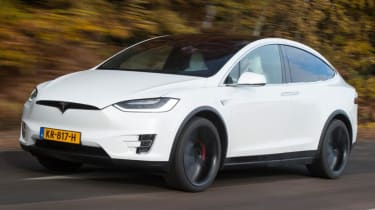 The Model X’s brutal acceleration has been well-documented online with multiple videos of the all-electric SUV embarrassing supercars in drag races. Choose the aptly-named ‘Performance’ model and switch it into Ludicrous mode and you’ll see 60mph come and go in 2.7seconds - although if you regularly do this the 301-mile range drops dramatically.

This performance becomes all the more incredible when you bear in mind the Model X will seat seven and can cruise in near-silence.

Fastest SUVs in the world 2020 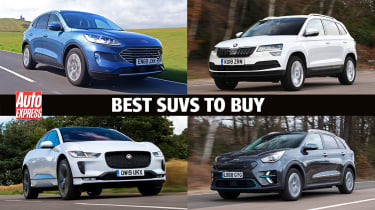 Which is your pick of the high-performance SUVs? Let us know in the comments below...