Not only does Chitty Chitty Bang Bang look brilliant, but it also (spoiler alert!) flies! 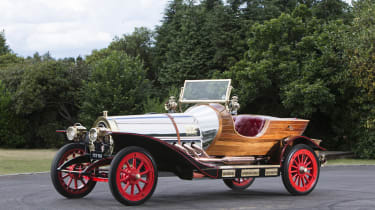 Not only does Chitty Chitty Bang Bang look brilliant, but it also (spoiler alert!) flies! Named after the noises it makes when it coughs and splutters into life, the eponymous car spawned countless replicas over the years, one of which was famously owned by Chris Evans.

Chitty Chitty Bang Bang has the look of classic cars from the 1920’s, with Dick Van Dyke’s character Caractacus Potts rebuilding it using an old boat hull and even metal parts from a chimney to cover the engine.

Since it was a mish-mash of parts, it’s hard to nail down exactly what model of car Chitty Chitty Bang Bang was derived from. However, we do know that the musical film had six CCBB’s made, one of which was road legal and registered in the UK.

That car used a Ford Essex V6 that was built at the Dagenham plant and featured in the Ford Transit van of the same era. Also, Dick Van Dyke said that the car was difficult to manoeuvre and had “the turning circle of a battleship.”

When a stage show of Chitty Chitty Bang Bang came to London in 2002, the car built for it took the world record for the most expensive prop ever built for a theatre show.