BMW's M135i 1 Series hot hatch moves to XDrive all-wheel drive in its latest all-new form. What's it like on the road?

This new hot hatch from BMW is high on quality and impressively quick - but it’s not the most characterful car of its kind.

On paper the new £36,430 BMW 135i xDrive has it all. A brand new 2.0-litre turbocharged engine that produces more power than any other four-cylinder production motor in BMW’s history. A highly sophisticated new part-time four-wheel drive system that generates enough traction to make your hair fall out. Plus an appealing new design, inside and out, that includes one of the most advanced communication packages ever seen in a small to medium-size car.

So to begin with, you can’t help but be impressed by BMW’s sporting new flagship for the latest 1-Series. And if you dive a little deeper into its specifications, things get better still. The engine may only be a 2.0-litre petrol, but it develops a thumping 301bhp between 4500-6250rpm and 450Nm between 1700-5000rpm. That’s enough to fire the M135i from 0-62mph in just 4.8sec, thanks in part to a standard-fit launch control system, and then on to a governed top speed of 155mph. So the 135i is quick with a capital Q.

At the same time, its new engine is some 35kg lighter than the old straight-six turbo from the outgoing M140i, and is much more efficient as a result, with a claimed combined fuel consumption figure of 41.0mpg and CO2 emissions of 155g/km. Mate these numbers to the rabid performance figures and the 135i’s range of abilities are easy to appreciate. 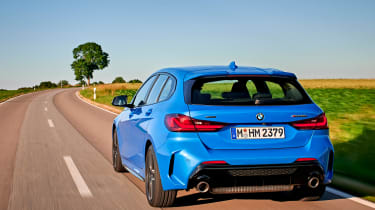 If anything, though, it’s the car’s new four wheel-drive system and the chassis’ clever electronics that are arguably more impressive still. In normal running the 135i xDrive is front-wheel drive, just like most other new 1 Series’ (the engine is mounted transversely this time in all versions).

But as soon as you put your foot down hard, the car’s “intelligent control logic” system sends anything up to 50 per cent of the torque to the rear axle and, within a couple of milliseconds, the 135i becomes four-wheel drive.

On the move the transition is undetectable. Instead the 135i xDrive seems to deliver 100 per cent traction at all times, seemingly on any surface and under any throttle load. Yet the whole time the system is monitoring whether you need all-wheel drive or not, and switches the rear axle on or off accordingly, thereby using the minimum amount of energy in the process. Hence the excellent fuel and emissions claims. And the monster performance.

From the outside the vast new kidney grille dominates the car’s character, although the five-door only 135i xDrive is, it must be said, a good-looking car full stop, with plenty of sporting intent along its flanks and at the back as well. But the interior is arguably more of a star attraction, not merely because it is extremely well specified (all 135i xDrives come in M-Sport spec as standard) and high in quality but also because it’s roomier than the old car, too. The boot is 20 litres bigger than before and there’s more leg and elbow room in all four seats, especially those in the rear.

Having said that, rear headroom remains on the tight side for anyone much over 5ft 10in, so although the new One is most definitely bigger inside, it’s still not the roomiest car of its ilk.

So, rear headroom aside, it’s an absolute peach of premium hot hatch to drive and to live with, correct? Not quite, for although the handling, steering, brakes, traction, specification and interior design are all very much the right side of excellent, the same cannot quite be said of the performance. Or, to be more accurate, the nature of the performance, because there’s nothing whatsoever wrong with the 135i’s objective acceleration.

No, the issue is all about character, about the way the car delivers its thrust. How it makes you feel when you’re going for it. Which is to say, it just feels a little bit ordinary somehow, a little bit anodyne in its delivery, mainly because the engine never really sings, not even if you rev it up to 6,000rpm and beyond. Nor does the exhaust make an especially memorable noise. 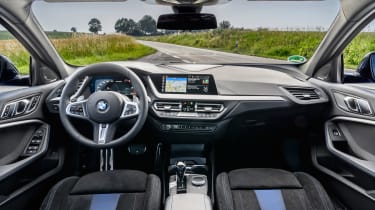 Which is a shame, because the eight-speed auto gearbox works brilliantly in all its modes, the mid-range torque is borderline sensational, and the grip on offer is always surprising. With a bit more va-va-voom from the engine, the 135i xDrive would go straight to the top of its class. But as it stands, it’s merely a very impressive car, but not one that wrenches too hard on your heart strings. It’s entirely up to the individual how much that matters overall.