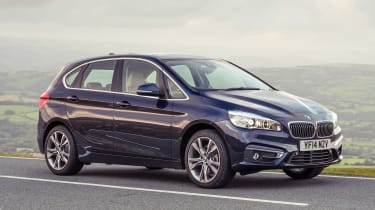 The 2 Series Active Tourer is just 2cm longer than a 1 Series hatchback, but thanks to its higher roofline it’s much more practical. As well as being able to seat seven, the Gran Tourer can carry up to 1,820 litres, which is almost on a par with the big estates such as the Skoda Superb and Mercedes E-Class. Even better, despite their fairly low profile, these cars are plentiful; we found almost 1,500 for sale, 40 per cent of which were seven-seaters. With petrol, diesel and plug- in hybrid variants, some with four-wheel drive, there’s an Active or Gran Tourer for all tastes. As efficient and user-friendly MPVs, these BMWs are brilliant alternatives to the SUVs that proliferate the market today.

When BMW introduced its first people-carrier in 2014, it raised a few eyebrows. At a time when most makers were moving away from MPVs and building in-demand SUVs, BMW, which had an array of SUVs already in its portfolio, launched a people-carrier in five (2 Series Active Tourer) and seven-seat (2 Series Gran Tourer) formats, and both cars have proved winners in the showroom.

One of the reasons is the spacious and versatile interior, achieved partly thanks to the use of front-wheel drive. This was the first BMW to have its power going only to the front wheels, yet it seems that not many buyers noticed or cared about this; but then there’s plenty more to like about the 2 Series Active and Gran Tourer than the drivetrain. 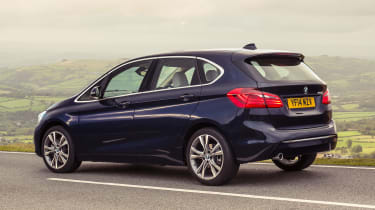 UK orders opened for the 2 Series Active Tourer in May 2014, and deliveries began in September. At first only 218i petrol and 218d diesel engines were available, but by November there were also the 220i, 216d and 220d, as well as the four-wheel-drive 225i xDrive and 220d xDrive. At the same time, M Sport trim was added to sit alongside the SE, Sport and Luxury models.

The Gran Tourer that arrived in June 2015 came with seven seats and was 21cm longer than the Active; it was offered in 218i, 220i, 216d, 218d and 220d guises. From April 2016 the plug-in hybrid 225xe Active Tourer became available, powered by a 1.5-litre 135bhp three-cylinder petrol engine with an 87bhp electric motor – although this powertrain was not fitted to the Gran Tourer.

Active Tourers are cheaper and more plentiful than Gran Tourers, and while the latter offers significantly more carrying capacity, it’s only usable as a seven-seater if you’re putting children in the third row. 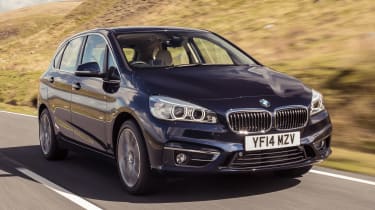 The four-cylinder engines are noticeably perkier than the three-cylinder units, but the latter do the job perfectly well. Equipment levels are identical between five and seven-seat editions; the SE has 16-inch alloys, dual- zone climate control, an electric tailgate, nav, a DAB radio and rear parking sensors.

Premium brands have largely stayed away from MPVs, so if you want a posh badge you’ll generally have to buy an SUV or estate. One exception is the Mercedes B-Class, which comes in five-seat form only.

You could also consider a Volkswagen Golf SV, which is more of a high-roofed Golf. If seven seats are key you could consider a VW Touran, which has efficient engines and is very user-friendly, but it’s a bit dull to drive and look at. Offering a bit more flair are the Renault Scenic and Citroen C4 Picasso, which are both available in seven-seat Grand forms, and it’s also worth having a look at the Ford C-Max, which is another five-seater that comes in seven-seat Grand form. 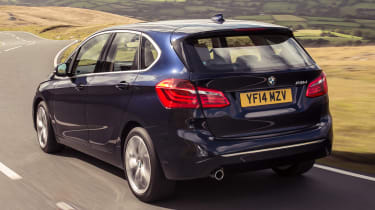 A manual gearbox is standard on all variants except the 220i and xDrive models, which get an eight-speed auto.

Parents should note that, although there’s room for three children in the Gran Tourer’s middle row, the centre seat has no Isofix mountings.

For just £40 extra, original buyers could specify a larger (by 10 litres) fuel tank. It’s worth finding a car with this option fitted if you can.

The Gran Tourer comes with seven seats, but the third row is suitable just for small children, and best thought of as occasional seats. 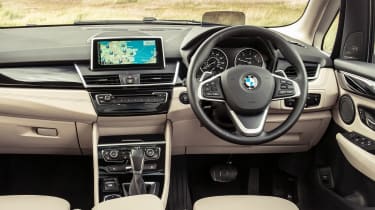 This is a highlight, because all cars are well equipped, ergonomically sound and built to a high standard. It’s a brilliantly user-friendly cabin, and this can also be said of the iDrive infotainment system. The high roof gives plenty of headroom, while legroom is fine for rows one and two. Versatility is boosted by a middle row with a back rest that folds 20:40:20; the seat itself is a 60:40 sliding bench.

Gran Tourers emit 6-10g/km more CO2 than Active cars so can cost more to tax, yet fuel economy is similar.

Condition-based maintenance means up to two years and 18,000 miles between services. A minor service costs £182, intermediate £258, and major £406; discounts of around 25 per cent apply to cars over three years old. All engines are chain-driven, with no cambelts to replace.

The 2 Series range as a whole has had 10 recalls, but only two affected the Tourer models. In January 2015 1,502 cars built between September 2014 and March 2015 were recalled for a driver’s seatbelt which could fail to unreel; a new mechanism fixed things. In August 2018, 4,025 Active/Gran Tourers built in May and June 2018 were recalled to replace faulty crankshaft sensors.

While the Active Tourer hasn’t appeared in our new or used Driver Power surveys, BMW came 25th out of 30 manufacturers in our brand results, with high servicing costs being one gripe. Owner reviews on sister title Carbuyer.co.uk give the Active 3.6 out of five and rate the larger Gran at 3.9; among a number of five-star reports are tales of electronic and mechanical glitches.