Strong performance from all engines, and handling that’s close to the best in class

This third-generation BMW X3 was all-new from the ground up, and is based on the brand’s CLAR platform, which it shares with the excellent 5 Series saloon. That means the new X3 is 55kg lighter than before, but retains similar dimensions to the old model.

The weight is distributed equally (50:50 front to rear), which helps improve handling, and M Sport models get standard sports suspension, which is firmer than the normal set-up and includes thicker anti-roll bars to improve body control in corners.

BMW also offers optional adaptive dampers for around £460, which allow you to select how stiff you want the car’s suspension to be, using the mode select button that also alters steering, throttle and gearbox settings. You can choose between Eco Pro, Comfort, Sport and Sport+ options.

The weight reduction over the old X3 means the latest version is lighter than rivals such as the Jaguar F-Pace and Volvo XC60, which boosts its handling. 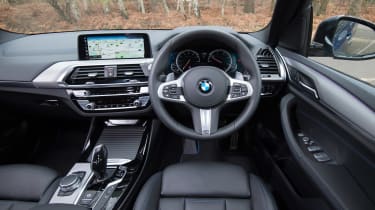 The previous X3 was always a top choice in this class when it came to driving dynamics, and that hasn’t changed with the G01 model. The advanced new architecture means the new BMW offers a class-leading ride and handling balance.

In comfort mode it’s supple enough that there’s only a small difference between it and the Volvo XC60, but it’s more compliant than the Volvo and deals with mid-corner bumps with more composure.

The X3’s steering isn’t as quick as the Jaguar F-Pace’s, and it doesn’t quite match the F-Pace’s agile handling, but it’s so close behind and is also more comfortable, so for most buyers the BMW is the better choice.

The M40i is a surprisingly accomplished driver's car. True, at £54,000 or thereabouts it's expensive, and true, it's a relatively tall SUV that can't defy the laws of physics - but with its 3.0-litre straight-six engine providing a 0-62mph time of just 4.8 seconds it's more than swift enough, while the playful crackles from the exhaust when in Sport mode are a welcome antidote to the X3's otherwise sensible nature.

A direct rival to the Audi SQ5, the X3 M40i entertains more during cornering; its meaty steering offers more feel than you might expect, its nose tucks neatly into corners, and body roll is well managed during tight turns.

All models benefit from the xDrive 4x4 system, and as a result the X3 is a competent off-roader. Owners aren’t likely to spend much time off-roading in the X3, but the extra traction the standard xDrive four-wheel-drive system adds will help on road, too.

The starting point of the new petrol engine line-up is a 2.0-litre four-cylinder engine making 182bhp and offering a 134mph top speed and 0-62mph on 8.3 seconds. Like all the other engines in the X3 line-up, it comes with a smooth-shifting automatic gearbox and no manual option. If you insist on a petrol engine, but want more power and efficiency, there's now the choice of a plug-in hybrid model which makes 249bhp, with the system capable of producing an extra 40bhp in power over short bursts. The pricey M40i is £14,000 more than the entry-level 2.0-litre petrol, so you'll need to really want the extra performance to justify the layout.

Alternatively, you can pick from a couple of diesels. The 2.0-litre four-cylinder model makes 187bhp and offers a claimed 7.9 second 0-62mph time, while the range-topping 3.0-litre six-cylinder diesel variant makes 261bhp and will do 0-62mph in 5.8 seconds.

We've tested the entry-level diesel model, the 20d. It’s a 2.0-litre four-cylinder unit, the same configuration as in the Jaguar F-Pace and Volvo XC60, and with 187bhp it matches the XC60 for power and beats the 178bhp F-Pace. But in our tests at the track the X3 20d was significantly quicker than its rivals. From 0-60mph, it was a second faster than the XC60 and 1.4 seconds faster than the F-Pace, taking just 8.0 seconds.

It’s a similar story with the in-gear figures: from 30-50mph in fourth the BMW recorded a time of 3.4 seconds, easily beating the Jaguar’s 4.6 seconds and the Volvo’s 3.7 seconds. It seems quicker in the real world as well, since the gearbox is well matched to the engine, with nicely spaced ratios. This helps boost refinement further, an area where the X3 excels because its powertrain is easily the quietest of the three models on the move.