The BMW X3 isn’t a budget option, but running costs should be as good as rivals

BMW is a premium brand, and that means overall purchase and running costs for the X3 are going to be higher than crossovers with lower badge values. Comparisons to the rest of the premium sector shouldn’t throw up too many shocks though. 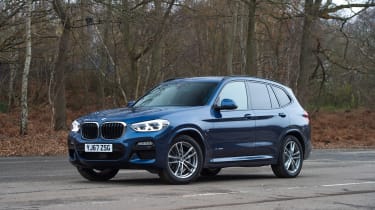 The same goes for fuel economy and emissions, which fall into the same ballpark as upmarket rivals. However, these are big, heavy vehicles, and it will be relatively easy for owners to return real world figures that look much less appealing than the official test results.

The BMW X3 insurance group ratings are similar to the outgoing model, which means the 2.0-litre petrol sets the ball rolling at group 28 (out of 50), while both the 3.0-litre diesel and the more powerful M40i attract the same group 40 rating.

While the previous generation BMW X3 was subject to a fair amount of dealer discounting which had a knock-on effect on used prices, the latest model is likely to depreciate at a rate closer to the likes of the Audi Q5 or Land Rover Discovery Sport. Our experts predict it will retain between 48 and 54 per cent of its value after three years and 36,000 miles.