The sharpened up exterior wraps a more premium cabin, with no shortage of tech

The latest BMW X3’s design gives the car a much more contemporary look than its predecessor, but it’s certainly evolutionary. Given the success of the previous model – and BMW’s inherent design conservatism – it was never going to be a radical departure. 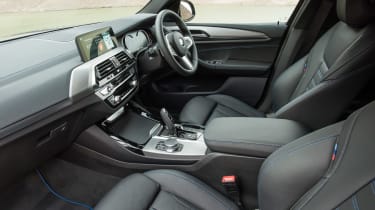 There’s still just the one five-door bodystyle, with a strong family resemblance to the rest of the BMW SUV range, but the double kidney grille is more prominent with rounded edges. The headlamps have a more rakish appearance, and the entire front end is bolder. The long, squared-off bonnet is a design cue from the bigger X5, while the body sides taper towards a backend that’s more curvaceous than on X3s of old.

You can tell the models apart, as xLine versions have ‘off-road’ accents with highlighted sills and more rugged detailing, while M Sport versions have body-coloured trim and a more aggressive look.

The X3 interior is more of a leap forward, and shades of the 5 Series saloon are evident in the latest design, which features a broad central console topped by a slick-looking tablet style display. A traditional BMW-style instrument binnacle sits ahead of the driver with prominent analogue dials for speed and revs.

As you’d expect from any new BMW, it employs plenty of the latest tech for safety and efficiency. Engines employ features such as variable vane turbocharging and common rail injection, while more advanced construction techniques mean the vehicle is lighter than before. The newly tapered rear end brings aerodynamic advantages, while ‘air curtain’ aero tech is designed to reduced drag around the front end.

Navigation is standard on all versions, while M Sport models feature an upgraded 12.3-inch widescreen display, which sits on top of the dash in your eyeline, so is more easy to read.

The user interface is slick, fast and easy to understand, which puts it ahead of the Jaguar F-Pace and Volvo XC60 for use on the move; it features a rotary iDrive dial as well as a touch pad interface, too. Features include live traffic updates for the sat-nav (which are excellent), a 20Gb hard drive for adding your own music, online weather and news updates and 3D mapping. It’s a great system, and all the better now Apple CarPlay is standard equipment. As in other BMWs, Android Auto is not supported. 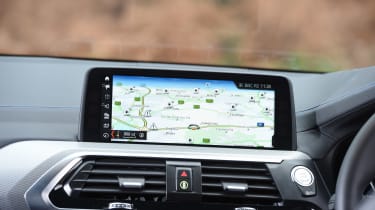 BMW’s upgraded stereo uses a 16-speaker Harman Kardon stereo, and costs around £820, although there is also a mid-range system, which has 12 speakers and costs about £300. However, the beauty of the BMW’s set-up is its logical menu layout, crisp graphics and ease of use.